This page provides information about the Camera component in V-Ray for Grasshopper.

V-Ray Camera node can be used to set a specific camera position and field of view. It should be connected to a V-Ray Renderer's Camera slot.

V-Ray Camera preview is available in Rhino's viewport. Please note that the preview size is set to a constant of 20 document units.

Right-click on the component for more options, including copying the camera position and target from the active Rhino viewport or any of the current project's standard or named views. You can also get back to view from camera by selecting the Look Through Camera option.

Note that when exporting a Camera animation to Rhino only the position and target parameters are transferred. For animated camera parameters, such as FOV, render the animation directly from Grasshopper. 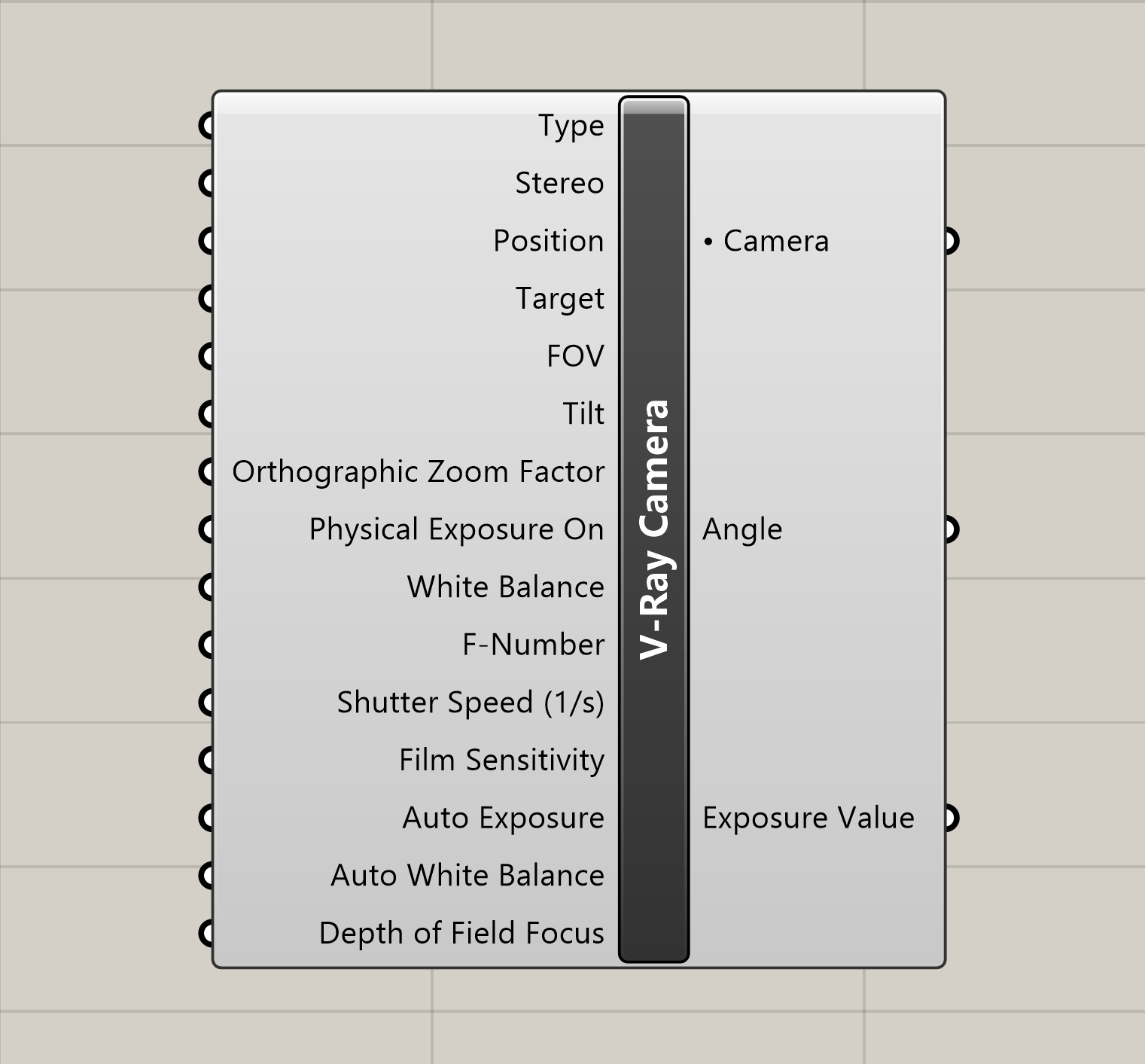 Switching to any of the VR types does not automatically adjust the output resolution. For VR Spherical mode, the required aspect ratio is 2:1, and for VR Cubemap - 6:1. This needs to be adjusted manually.

Stereo (Integer) – Enables Stereoscopic rendering mode. The images for the left and right eyes are rendered in a "side by side" or in "top-bottom" layout .

Field of View (Number) – Slot for the camera field of view angle measured in degrees.

Tilt (Number) – Tilts the camera around its aim vector. The value is specified in degrees.

Orthographic zoom factor – Specifies the inverse of the orthographic scene width. Set to 0 for perspective cameras and a greater than 0 value to control the zoom of an orthographic camera. In orthographic mode the actual distance between the position and the target of the camera is meaningless and the field-of-view angle is set to 180 degrees.

White Balance (Color) – Objects in the scene that have the specified color appear white in the image. Note that only the color hue is taken into consideration; the brightness of the color is ignored. This parameter is ignored when Exposure is disabled.

F-Number (Number) – The aperture (f-number) parameter determines the lens speed and consequently the brightness of the image. Additionally, the f-number affects the Depth of Field of the camera. The smaller the f-number is, the more narrow the depth of field is.

Film Sensitivity (Number) – The film speed (ISO) parameter determines the sensitivity of the film and consequently the brightness of the image. If the ISO value is high (film is more sensitive to the light), the image is brighter. Lower ISO values mean that the film is less sensitive and produces a darker image.

Auto Exposure (Boolean) – Automatically determines an appropriate exposure value for the render. Note that this option only works in the Production rendering mode.

Auto White Balance (Boolean) – Automatically determines a suitable white balance value for the image. Note that this option only works in the Production rendering mode. When enabled, the camera's White Balance color is ignored.

Depth of Field Focus (Number) – Setting this value to anything different than zero enables depth of field (DOF). The value also determines the focus distance.

Angle (Number) – The XY angle to which the camera vector is rotated around the Z axis. It can be connected to a Light Rig's Light Angle parameter to dynamically control the light position based on the camera location.

Exposure Value (Number) – Output for the exposure value based on the ISO, shutter speed and the F-number. 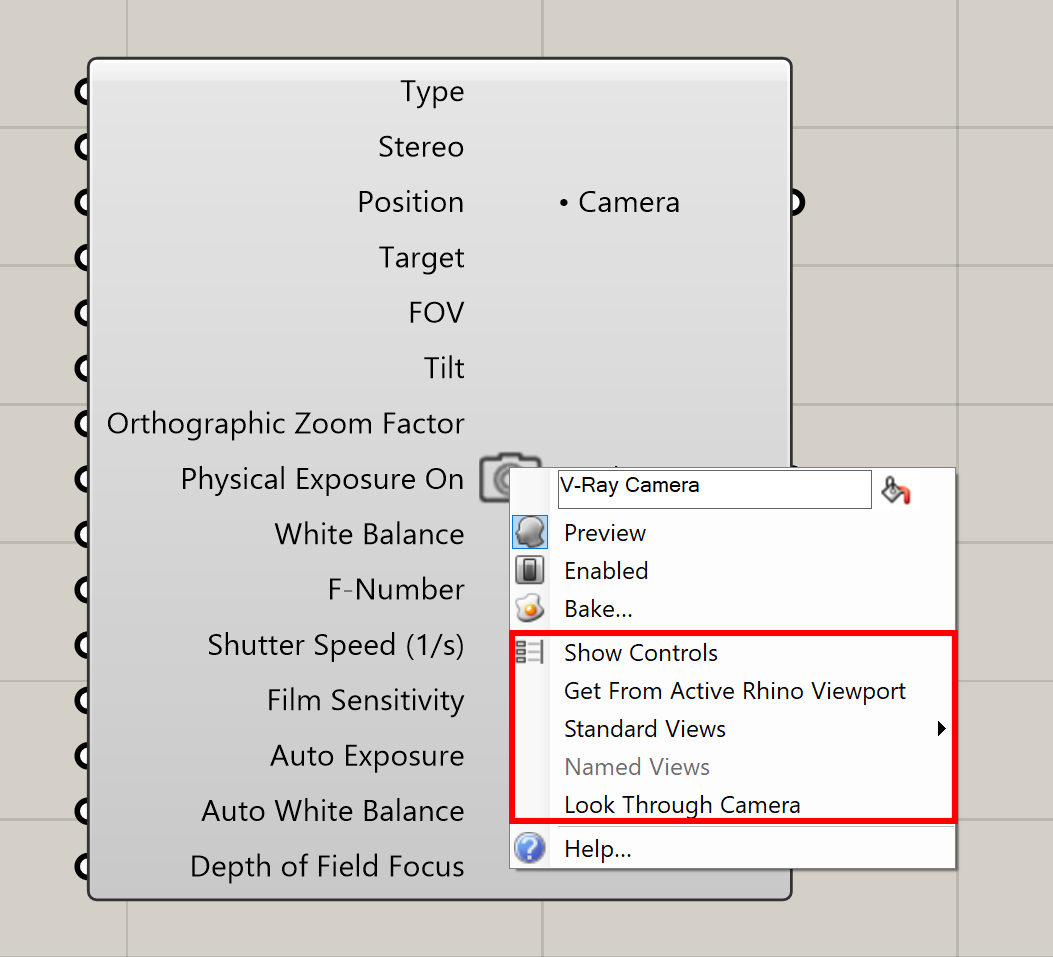 Right-click on the node to see more options.

Example scenario of how to use the Camera node 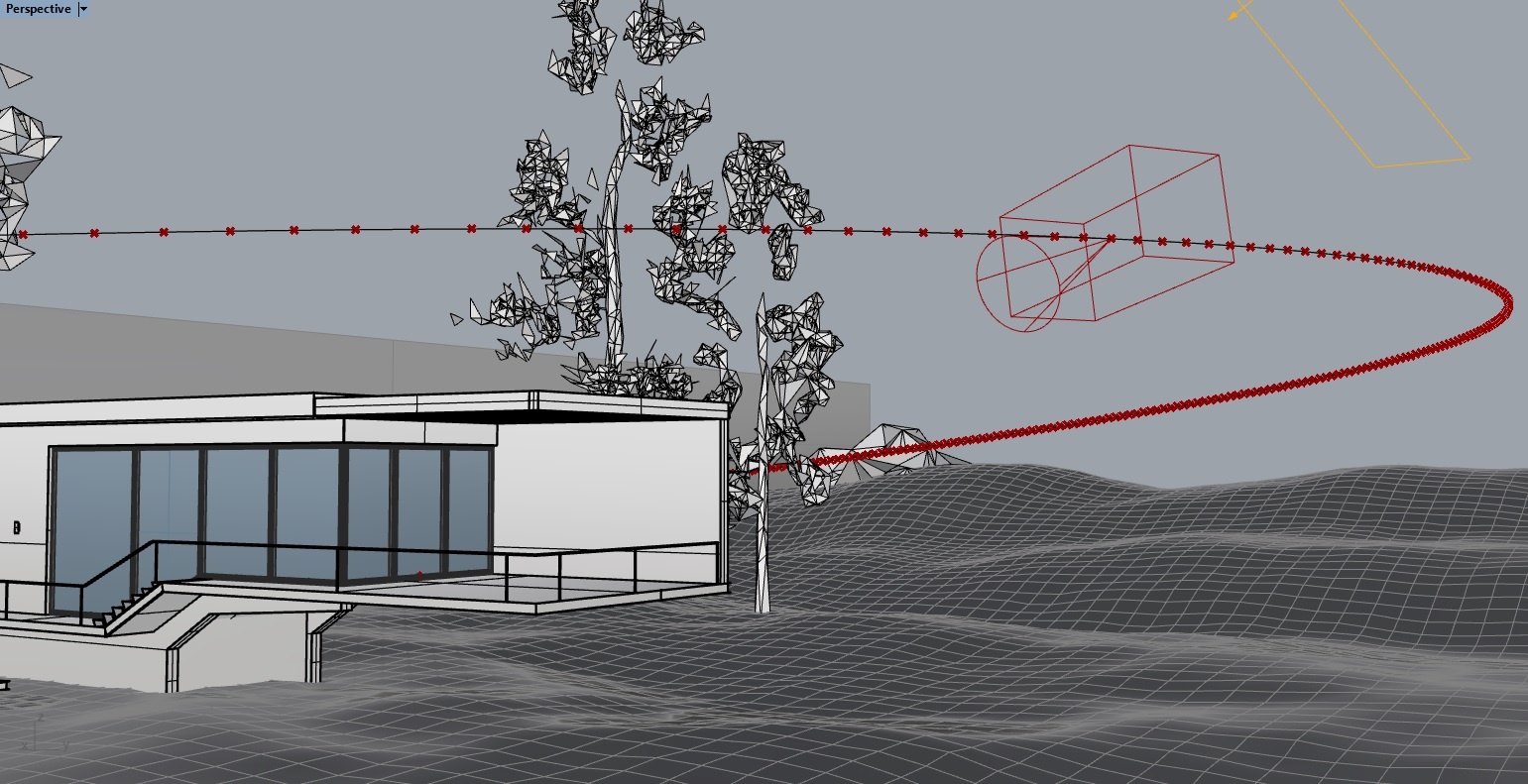 Result in the Viewport