This page provides information on the Camera settings in the Asset Editor.

The main place to adjust the Camera settings is the Camera rollout. If you need to fine-tune the settings, you can also use the Advanced Camera Parameters rollout.

Type – Specifies the type of the camera. This is where you can define the output required for VR rendering or standard imaging.

Stereo  – Enables or disables the Stereoscopic rendering mode. Stereoscopic images are rendered "side-by-side" or "one on top of the other" based on the Output Layout option. You do not need to re-adjust the image resolution as it adapts automatically.

Exposure Value (EV) – Controls the sensitivity of the Camera to the scene lighting levels. The result is a brighter or darker image. If Auto Exposure (by clicking on it) is enabled, the Compensation value becomes available. When the Auto button is enabled, the ISO, F number and Shutter speed are locked.

Compensation – This option is enabled when the Exposure Value (EV) is set to Auto. It is an additional compensation for the auto-exposure value, in f-stops. A value of 1.0 makes the result twice as bright, and -1.0 makes it twice as dark.

White Balance – Renders objects in the scene that have the specified color as white in the image. Note that only the color hue is taken into consideration; the color brightness is ignored. There are several presets that can be used, most notably the Daylight preset for exterior scenes. You can click on the Auto option in order for V-Ray to automatically adjust the White Balance. For more information, see the White Balance example below.

Please note that the Auto option for both Exposure Value and White Balance works only in Production rendering mode and Light Cache must be specified as the secondary GI engine. Light Cache Disk Caching is not supported with the Auto option enabled. You can use it in Single Frame mode instead.

Auto Values – This option is available when Auto Exposure/White Balance is used. It stores the auto calculated Exposure and White Balance from the last initialized render as values that can be reused in the next render by pressing the check button (

). This option helps if you have manually set different values for the Exposure and White Balance and want to return to V-Ray best suggested values (for the last render). Manual refresh is required to get the values from the last render by pressing the update button (

). See the short example video below. 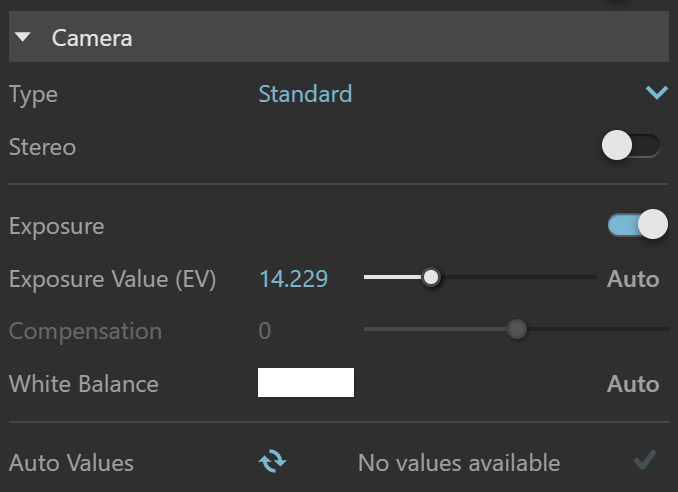 Using the white balance color allows additional modification of the image output. Objects in the scene that have the specified color appear white in the image. E.g. for daylight scenes this value could be peach color to compensate for the color of the sun light etc. 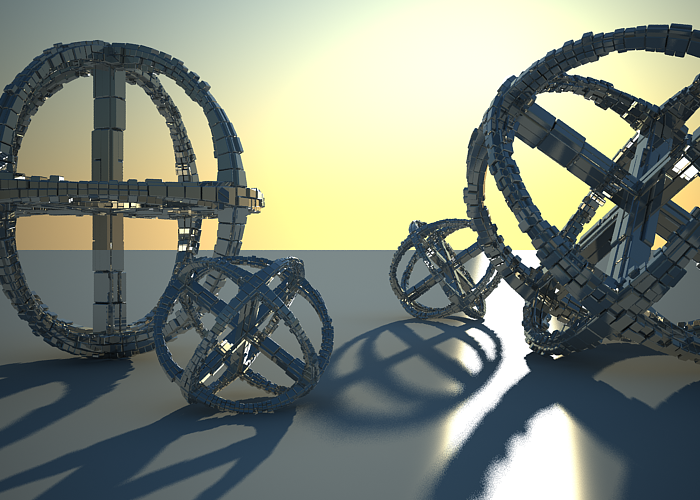 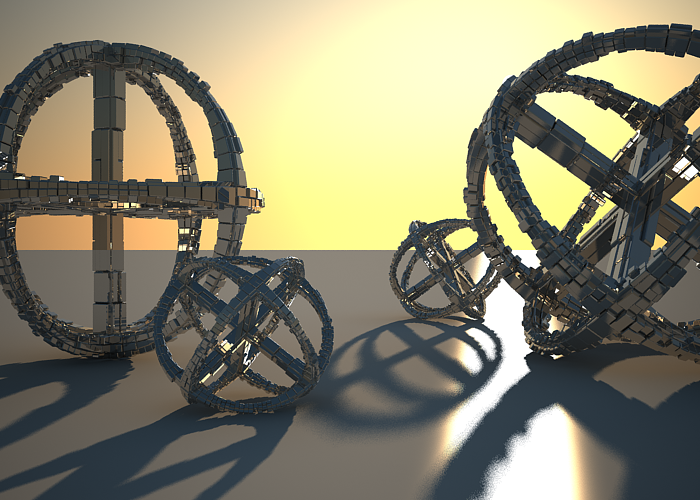 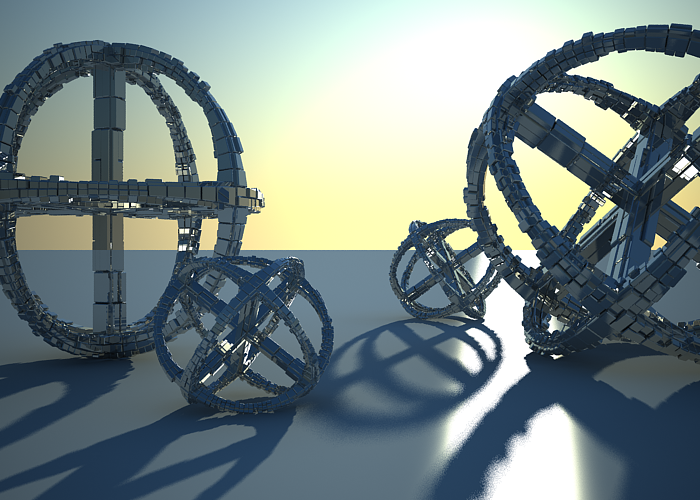 Depth of Field – Turns on depth of field sampling.

Defocus – Determines how sharp or de-focused the image might look outside a plane determined by the Pick Focus Point command. This option is also known as Focus Range.

Focus Source – Chooses the way the camera focus is determined.

Pick Point – Determines the position in 3D space by picking in the viewport where the camera should be in focus.

Focus Distance  – Affects the Depth of Field of the Camera and determines which part of the scene is in focus.

Picking the Pick Point can also be done from the viewport, just like using the Camera Focus Tool button from the object context menu. A minor difference in selecting Pick Point from the menu compared to the Asset Editor button is that the menu item is always active.

In the Asset Editor, the Pick Point option is not active if the Depth of Field is disabled. From the menu, the Camera Focus Tool command can be fired and a focal distance is set at any point. However, if Depth of Field is not enabled it won't be used.

Vignetting – Determines the reduction of an image's brightness at the periphery compared to the image center. For more information, see the Vignette example below.

Vertical Lens Tilt – Simulates vertical tilting of the camera which allows for perspective corrections or achieving a "2-point perspective" look.

This parameter controls the simulating the optical vignetting effect of real-world cameras. When set to 0.0, vignetting is disabled. 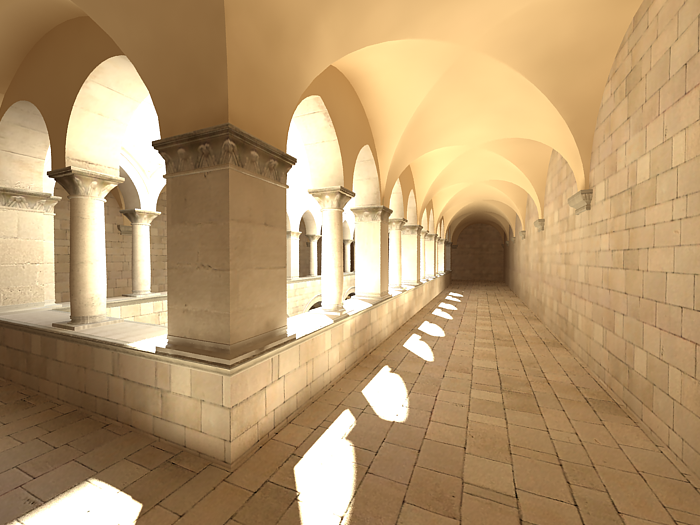 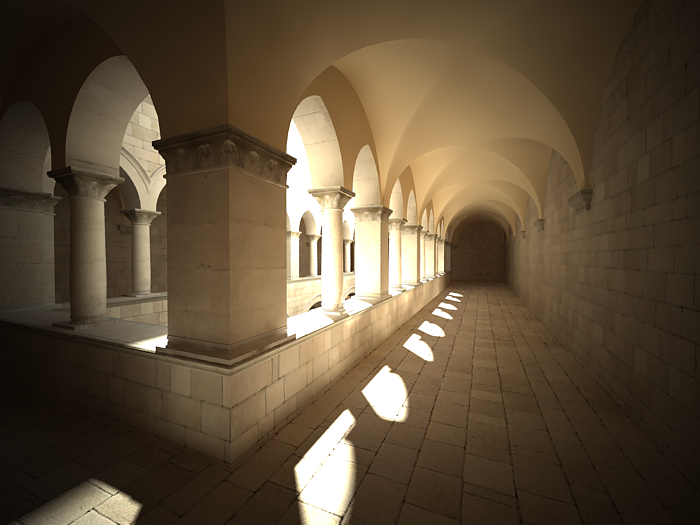 Film Sensitivity (ISO) – Determines the sensitivity of the film and consequently the brightness of the image. If the ISO value is high (film is more sensitive to the light), the image is brighter. Lower ISO values mean that the film is less sensitive and produces a darker image. For more information, see the ISO example below.

This rollout becomes available, when Depth of Field is enabled.

Blade – Sets the number of sides for the polygonal shape of the aperture.

Rotation – Defines the rotation of the blades in degrees.

Anisotropy – Allows the stretching of the Bokeh effect horizontally or vertically to simulate anamorphic lenses. If you want the ratio of height to width of the bokeh to be k:1,  then the value for anisotropy should be sqrt(1/k)-1. For example, for anamorphic bokeh, which is 2.39:1, the anisotropy value should be -0.353.

This parameter determines the sensitivity of the film and so the brightness of the image. If the film speed (ISO) is high (film is more sensitive to the light), the image is brighter. Lower ISO values mean that the film is less sensitive and produces a darker image.

Exposure is on, Shutter Speed is 60.0, F Number is 8.0, Vignetting is on, White balance is white. 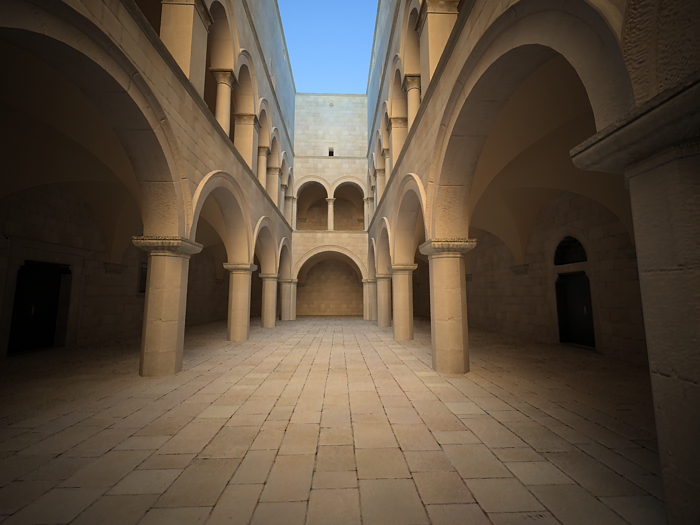 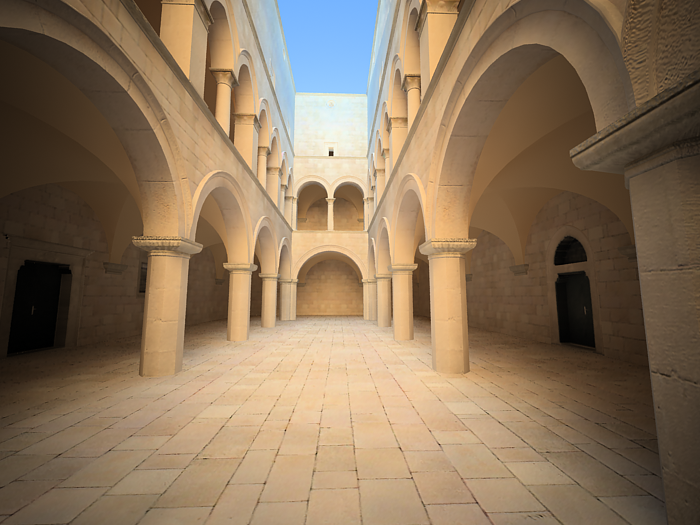 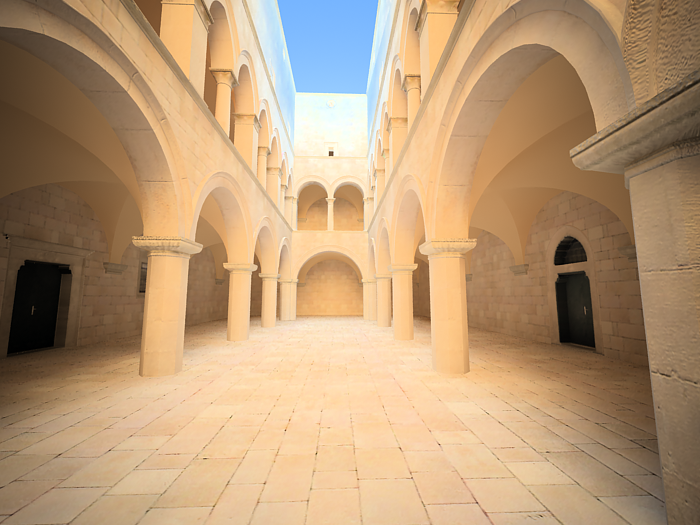 Note: All the images from the following examples are rendered using the VRaySunSky set with their default parameters. 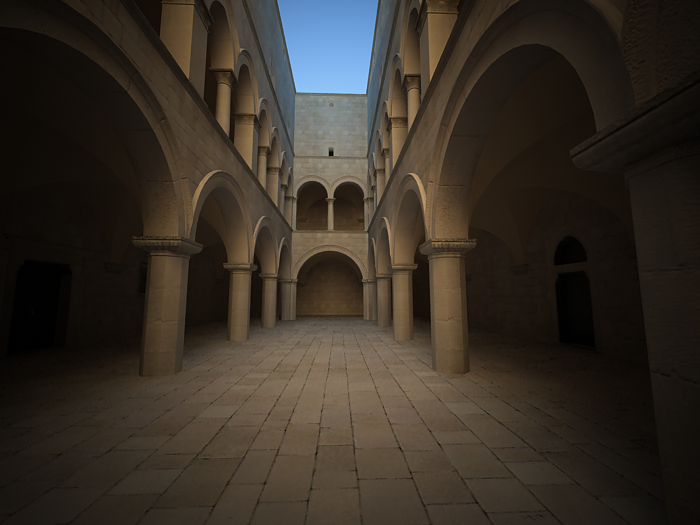 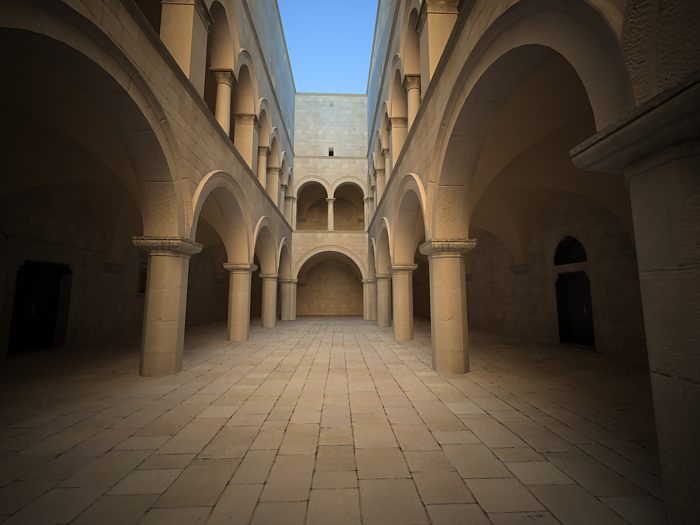 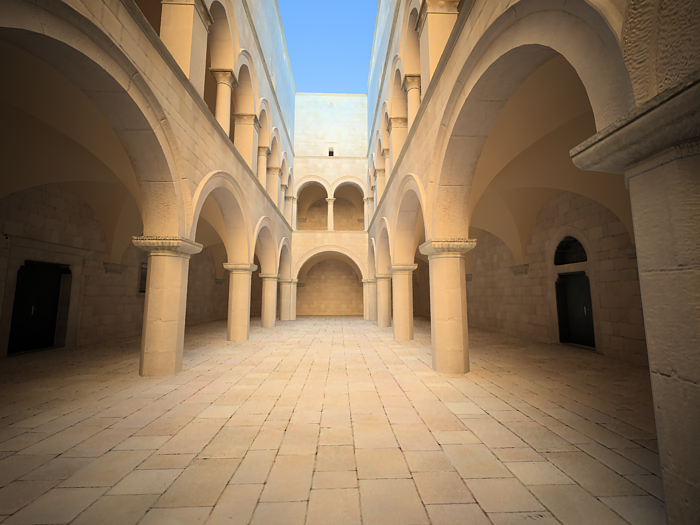 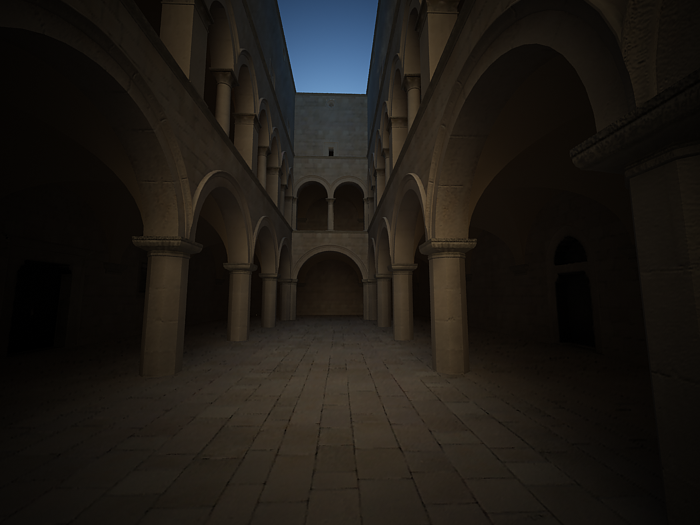 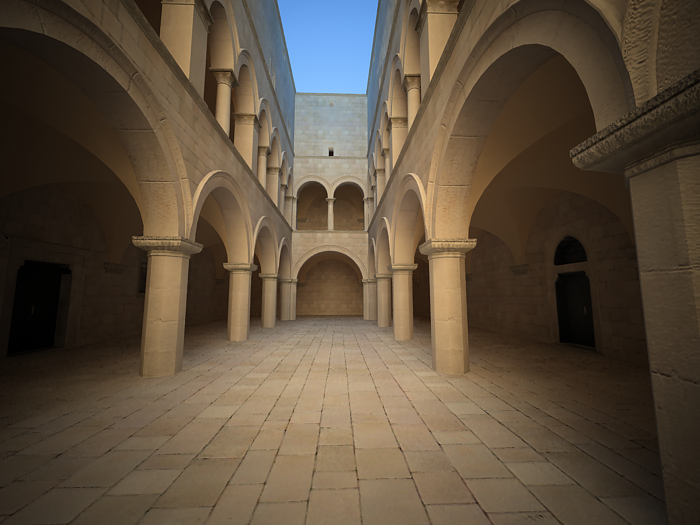