This page provides information on the Fuel rollout for a FireSmokeSim object.

There is no need to use fuel for simple fire, which can be produced with hot air using the default settings of the Fire Source.

When using Fuel to simulate burning, be sure to enable the export of the Fuel Grid Channel from the Output roll-out of the Simulator.

The Fuel rollout controls the simulation of burning. It can be useful for gasoline explosions, or propagating fire, or other special effects that require more control over burning.

The burning strength is determined by the smaller of the values of the Fuel and Oxygen channels:

Ignition Temp. | fl_ignition – The minimum temperature needed for the fuel to start burning. Keep in mind that the environment temperature is 300 Kelvins so setting this parameter to a lower value will cause the entire Fuel channel to spontaneously ignite. You can find out more about Phoenix Grid Channel Ranges here.

Energy | fl_energy – Controls how much temperature is produced by the burning fuel and how strong the expanding pressure is. A very high value will produce a rapidly increasing in size balloon of flames. Ideally, you would like just the right amount of Energy to release enough Temperature to ignite the neighboring fuel.

Fuel Depletion | fl_fueldepletion – The rate at which the Fuel channel burns out. You can use this parameter in conjunction with the Fuel Buoyancy on the Dynamics rollout to produce lingering flames that travel upwards with the Smoke.

Smoke Amount | fl_smokeamount – Multiplier for the amount of Smoke produced during burning. Note that if too much smoke is produced, the burning will decrease as no Oxygen would remain to sustain burning, even if there is enough Fuel.

Smoke Threshold | fl_smokethres – When the Oxygen in a voxel is less than the Fuel, this value controls how much of the burning Fuel produces Smoke. Higher values cause less of the burning fuel to produce Smoke.

Propagation | fl_propg – Controls the speed of expansion of the fire and smoke generated by the burning fuel. If your simulation is exploding in a big bubble, consider reducing the Propagation or the Energy. 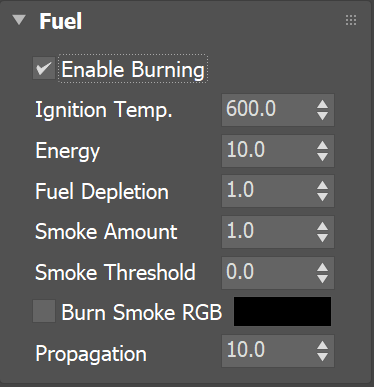