The Dome light is a type of VRayLight that provides somewhat even lighting to a scene.

A Dome light is a type of VRayLight that shines inward at the scene as if from a spherical or hemispherical light source outside the scene extents. This light is frequently used for Image-Based lighting using panoramic HDR images used as environments.

In the images below, a dome light is positioned and is the only source of light in the render. 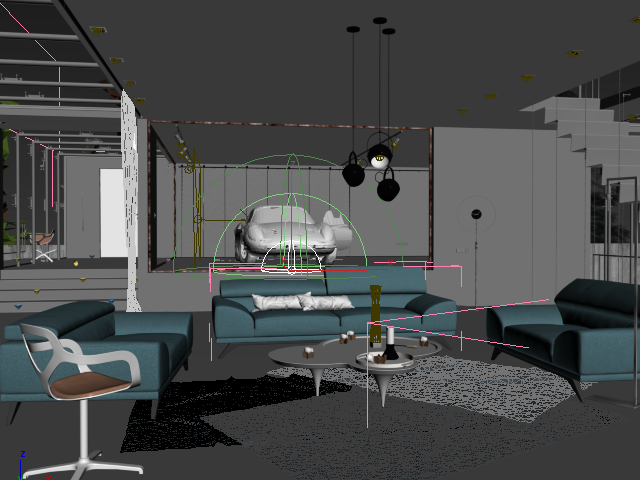 Dome light in the scene 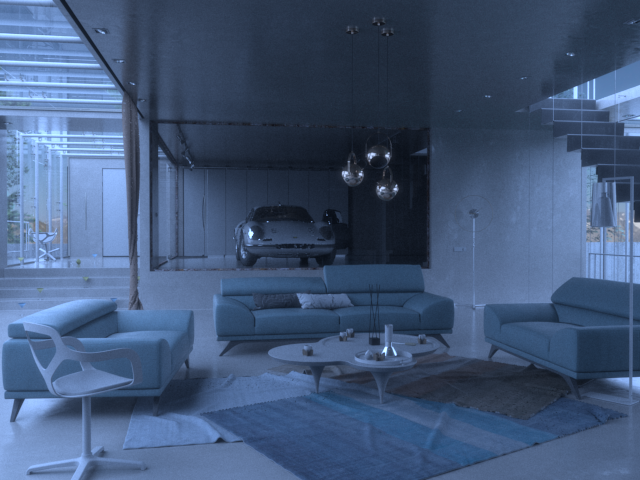 On – Turns the VRayLight on and off.

Type – Specifies the shape and function of the light:

Units – Specifies the light units. Using correct units is essential when you work with the VRayPhysicalCamera. The light automatically takes the scene's unit scale into consideration to produce the correct result for the scale you are working with. The possible values are:

Multiplier – Multiplier for the light color, and also the light intensity for some Units settings.

Mode – Specifies the mode in which the color of the light is determined:

Map – Enables the use of a texture for the light surface. The button selects the map to use. The texture intensity is also affected by the Multiplier value.

The Dome light supports texture maps that determine the amount of light coming from each direction on the virtual dome hemisphere based on HDR images. For more information, see The IBL example below.

Spherical (full dome) – When enabled, the dome light covers the entire sphere around the scene. When disabled (the default), the light covers a hemisphere only.

Affect alpha – When enabled, the virtual sphere on which the dome texture is mapped is visible as a solid object in the rendered image's alpha channel.

Ray Dist – Specifies the method of determining the maximum distance to which shadow rays are going to be traced.

Target radius – Defines a sphere around the light icon where photons are shot when photon-mapped caustics or the global photon map are used.

Emit radius – Defines a sphere around the light icon from which photons are shot towards the target radius area.

Note: Using a far clipping plane on your camera hides the light dome from being visible in the final render.

Adaptive dome – Speeds up the rendering by optimizing the sampling algorithm for the dome light.

Exclude – Opens the 3ds Max Exclude/Include window for selection of objects to be excluded or included in illumination and/or shadow-casting for this light.

Cast shadows – When enabled (the default), the light casts shadows. Turn this option off to disable shadow casting for the light.

Double-sided – This option has no effect for Dome light sources.

Note: Regardless of whether this option is enabled, the light source still is taken into account by Global Illumination calculations, which might cause secondary GI rays to be blocked by or bounced off the light's surface. To make the light completely invisible to GI, place a VRayColor texture map into the light's texture slot and set the alpha value for the VRayColor map to 0.0.

Affect specular – Determines whether the light affects the specular portion of the materials. The Multiplier value on the Intensity rollout controls the light's contribution to specular reflections.

Affect reflections – Specifies whether the light source appears in reflections.

Affect atmospherics - Specifies whether the light influences the atmospheric effects in the scene. The value determines the amount of involvement.

Cutoff – Specifies a threshold for the light's intensity, cutting off the light's effect on a surface when it falls below this value. Lights lose intensity due to GI bouncing or decay. When light hits a surface but its intensity falls below the cutoff, the effect of the light on that surface is not computed. This can be useful in scenes with many lights, where you want to limit the effect of the lights to some distance around them or reduce computations (and thus reduce rendering time) where the light's impact is negligible. Larger values limit the light's effect on objects to a smaller area around the light source, while lower values increase the range of the light's effect. If you specify 0.0, there is no cutoff and the light is calculated for all surfaces regardless of intensity loss. The default value is 0.001. This parameter is not available when the renderer is set to GPU.

Tex resolution – Specifies the resolution at which the texture is resampled for importance sampling.

Enable viewport shading – When enabled, the effect of the light is visible in the viewport.

Viewport wire color – When enabled, the light's wireframe is displayed in the specified color in viewports.

Icon text – Enables or disables the preview of the light name in the viewport.