This page provides information on the V-Ray Physical Camera parameters that can be added to standard Houdini cameras.

The V-Ray Physical Camera allows you to use real-world parameters to set up the virtual CG camera (e.g. f-stop, lens focal length, etc). This gives you access to lens properties such as aperture (F-Stop) and shutter speed as well as depth of field, motion blur, and more.

V-Ray Physical Camera also makes it easier to use light sources with real-world illumination such as V-Ray Lights with physical units or V-Ray Sun Light.

Camera Type – Determines the type of the physical camera to simulate. This mostly has an effect on the motion blur effect produced by the camera:

Shutter Angle – Shutter angle (in degrees) for the cinematic camera.

Shutter Offset – Shutter offset (in degrees) for the cinematic camera.

Latency – CCD matrix latency, in seconds, for the video camera

Specify Field of View – Specifies the source for the camera's field of view setting. When enabled, the FOV parameter is manually set. When disabled, FOV is determined by the Focal Length parameter.

Film Width – Specifies the horizontal size of the film gate in millimeters. Note that this setting takes into account the system units configuration to produce the correct result.

F-Number – Determines the width of the camera aperture. For more information, see the F-Stop (F-Number) example below.

Shutter Speed – Specifies the shutter speed, in inverse seconds, for the still photographic camera. For example, a shutter speed of 1/30 of a second corresponds to a value of 30 for this parameter. For more information, see the Shutter Speed example below.

White Balance – A color that can be used to alter the image output. Objects in the scene that have the specified color appear white in the image. Note that only the color hue is taken into consideration; the brightness of the color is ignored. For more information, see the White Balance example below.

Transfer ROP Auto Corrections – (available only if Auto Exposure/Auto white balance in the ROP are enabled) Lets you transfer the calculations to a camera as an ISO correction, keeping the options affecting Depth of Field and Motion Blur unchanged (e.g. shutter speed, f-number).

Use Vignetting – When enabled, the optical vignetting effect of real-world cameras is simulated.

Vignetting – Specifies the amount of the vignetting effect, where 0.0 is no vignetting and 1.0  is normal vignetting. For more information, see the Vignetting example below.

Optical Vignetting – Controls the strength of the optical vignetting, also known as "cat's eye" vignetting. This effect is due to the fact that the shape of the bokeh highlights resembles the shape of the aperture. As the distance to the optical axis increases, the bokeh highlights are progressively narrowed and begin to resemble the shape of a cat's eye. The larger the distance from the image center, the narrower the cat's eye becomes. Optical vignetting tends to be stronger in wide angle lenses and large aperture lenses, but the effect can be noticed with most photographic lenses.

Horizontal/Vertical Lens Shift – Values other than 0 tilt the lenses to simulate 2-point perspective.

Horizontal/Vertical Offset – Shutter offset (in degrees) for the cinematic camera.

The following parameters of the physical camera are linked to some of Houdini's channels as part of the integration of V-Ray for Houdini:

The main options that control the brightness of a V-Ray Physical camera are Aperture F-number, Shutter Speed and ISO. They affect each other and you need to balance them according to your scene. Keep in mind that these settings do not correspond to those of a real-life camera. They apply only to the V-Ray Physical camera. 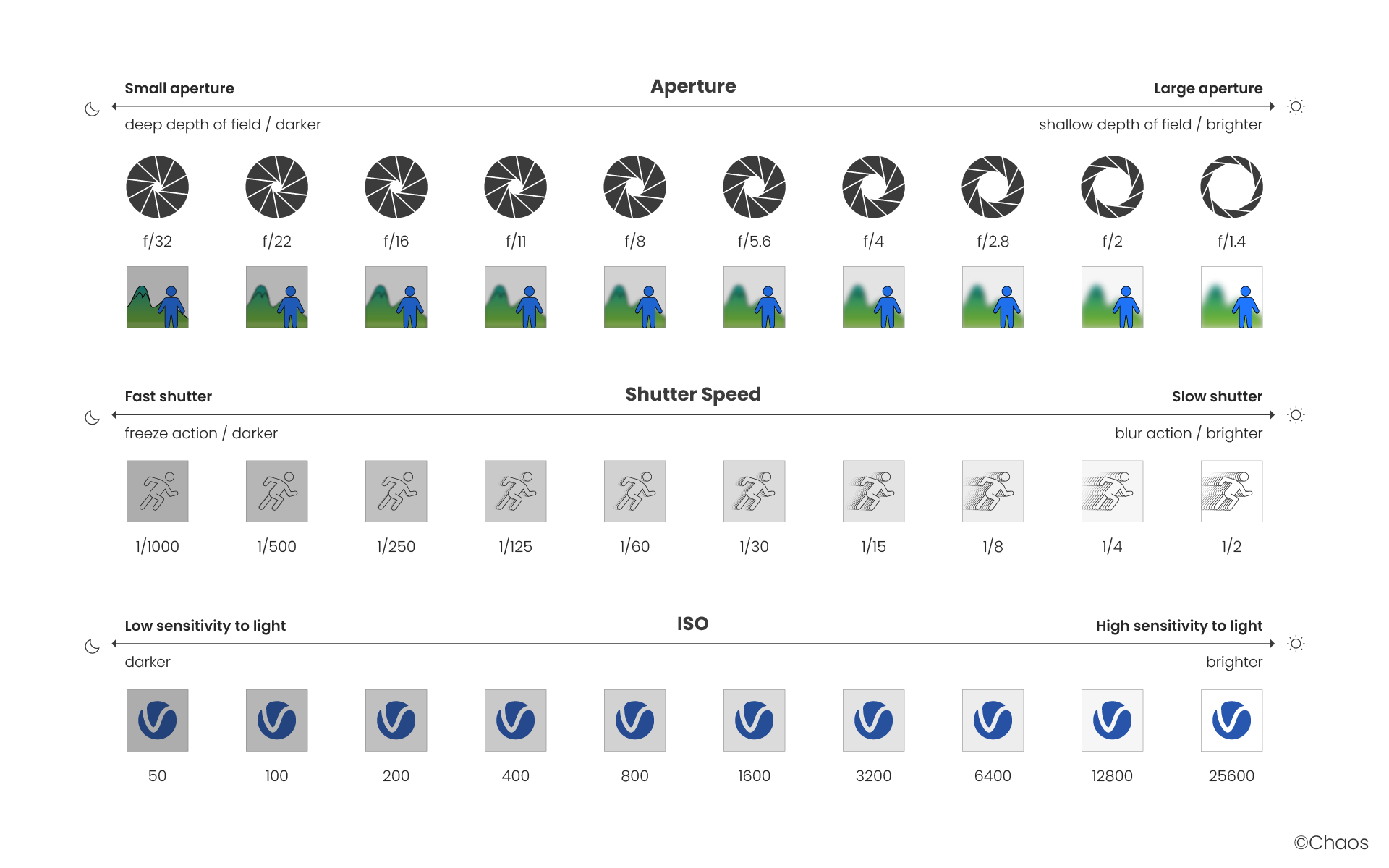 Enable – Turns on depth of field sampling. For more information, see the Depth Of Field (DOF) example below.

Focus Distance – Sets the focus distance of the camera.

Number of Blades – Specifies the number of blades of the polygonal aperture.

Blades Rotation – Defines the rotation of the blades in radians.

Bokeh Anisotropy – Allows stretching of the bokeh effect horizontally or vertically to simulate anamorphic lenses. Values other than 0.0 stretch the bokeh effect horizontally or vertically. If you want the ratio of height to width of the bokeh to be k:1,  then the value for anisotropy should be sqrt(1/k)-1. For example, for anamorphic bokeh, which is 2.39:1, the anisotropy value should be -0.353.

Enable – Enables a texture file to define the shape of the aperture.

Affect Exposure – When enabled, the texture affects the camera's exposure in addition to the shape of the aperture.

Texture – Specifies the texture file that will determine the shape of the aperture.

Resolution – Specifies the resolution of the texture file.

Rolling Shutter – Specifies whether the rolling shutter effect is enabled and the direction of the shutter.

Rolling Shutter Duration – The time for the shutter to pass through the image in 1/seconds.

Distortion Texture – The texture to be used to determine the camera distortion when Distortion Type is set to Texture.

Lens File – Specifies the file for calculating the camera distortion when the Distortion Type is set to Lens File.

The difference between the two types of distortion is slightly visible. The Cubic type should be used in some camera tracking programs like SynthEyes, Boujou, etc. 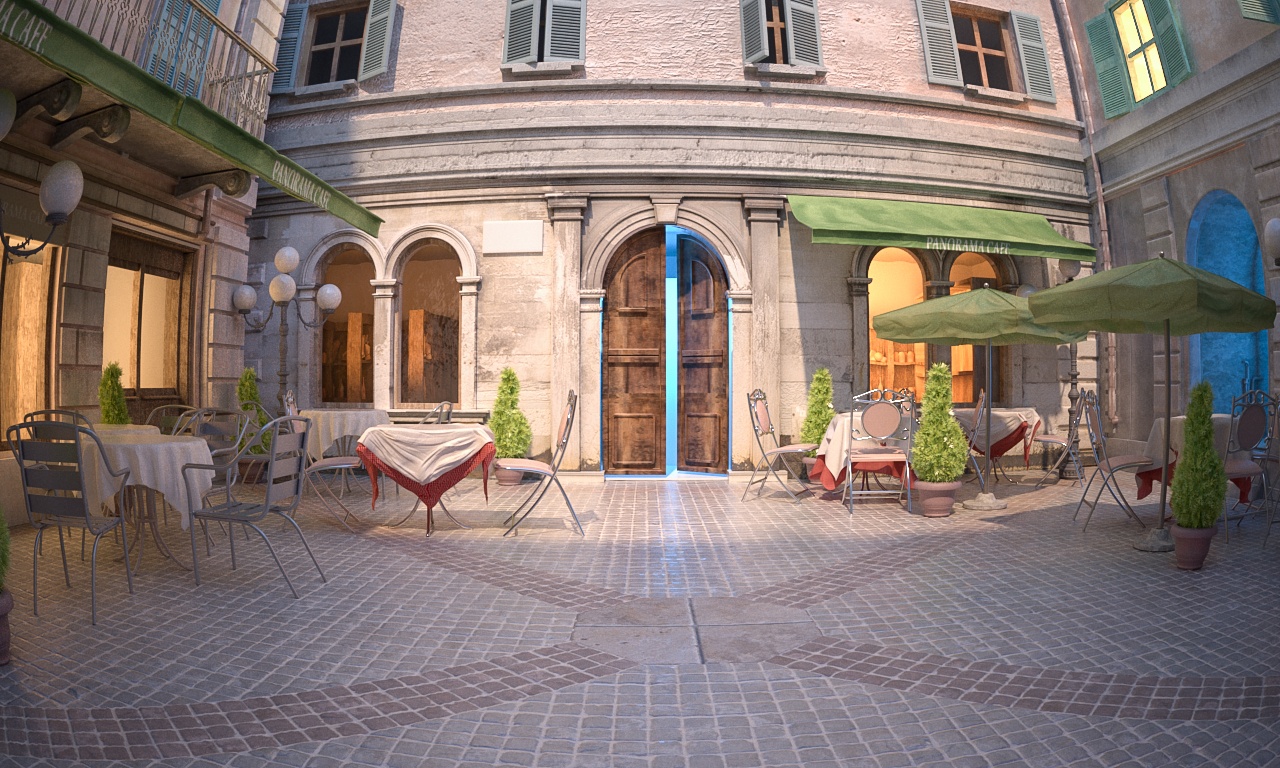 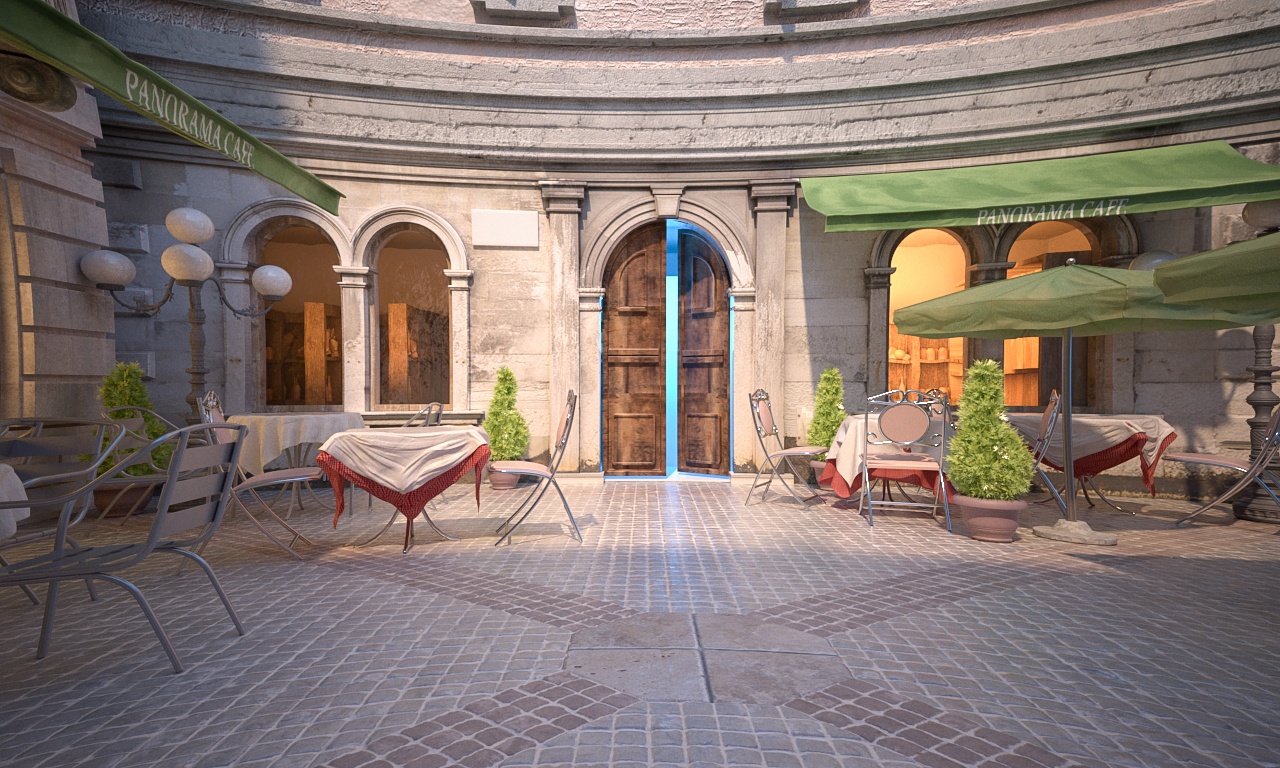 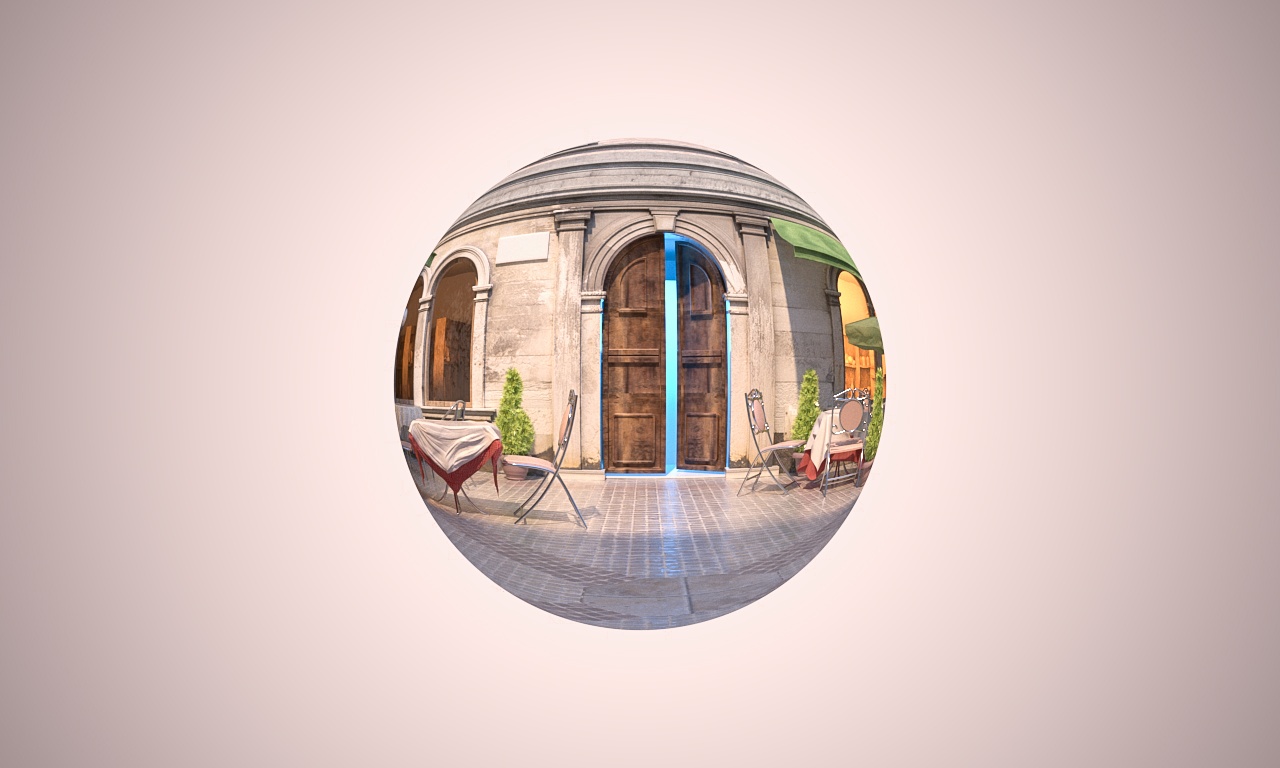 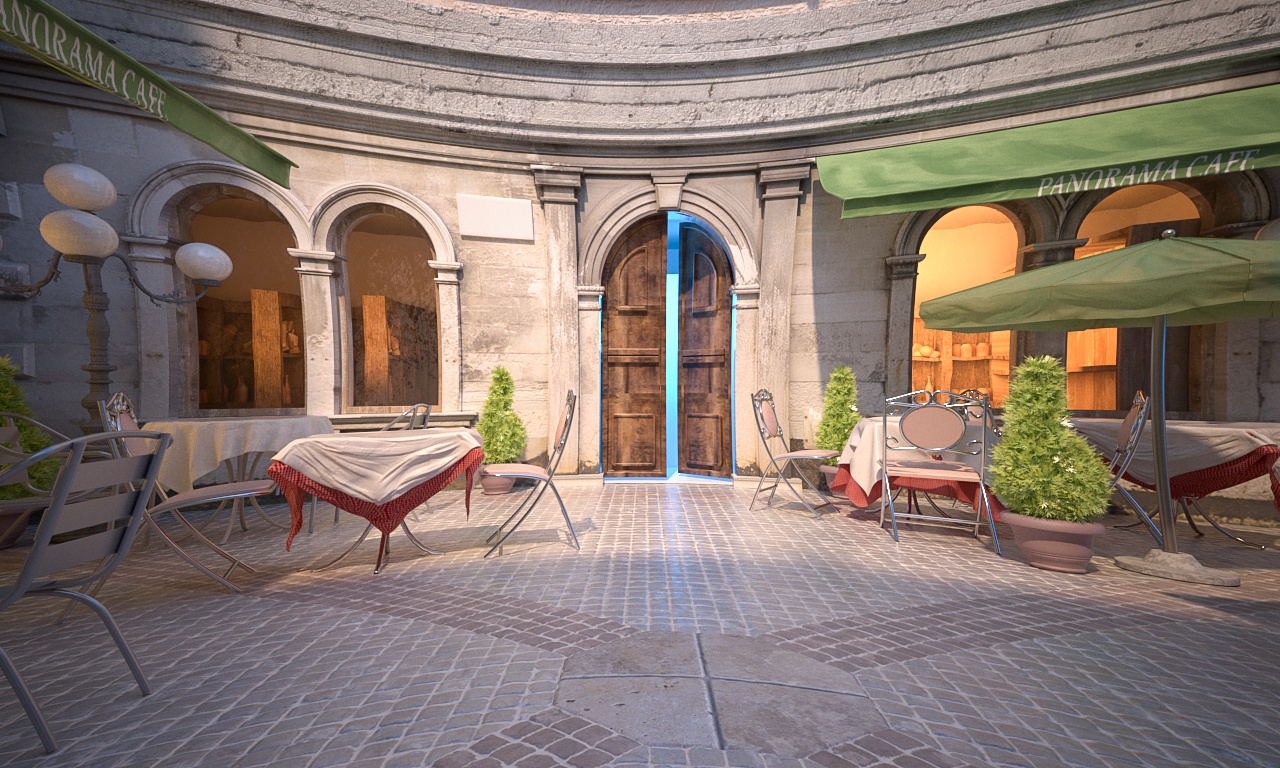 Note: All the images from the following examples are rendered using the V-Ray Sun and Sky set with their default parameters.

The images in this example show the effect of changing the F-Number. The following constant settings were used for some parameters: Exposure is on, Shutter Speed is 60.0, ISO is 200, Vignetting is on, White Balance is white. 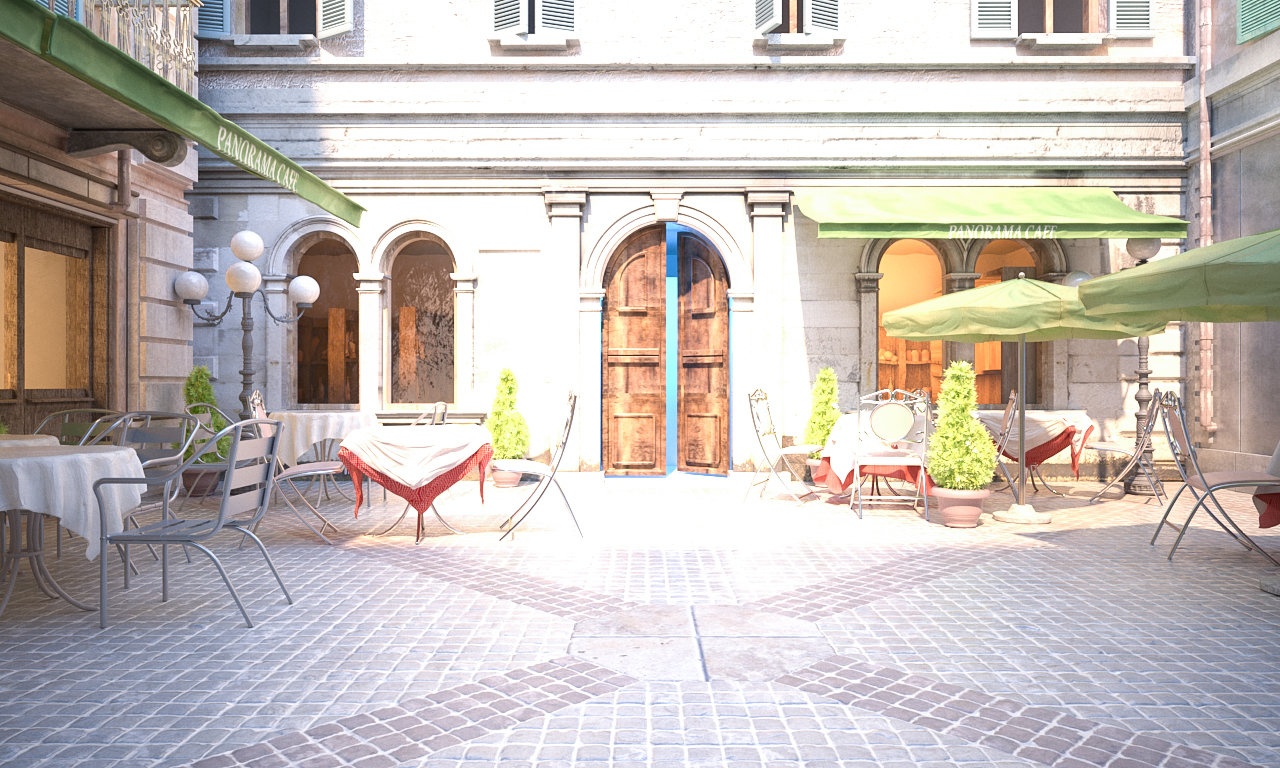 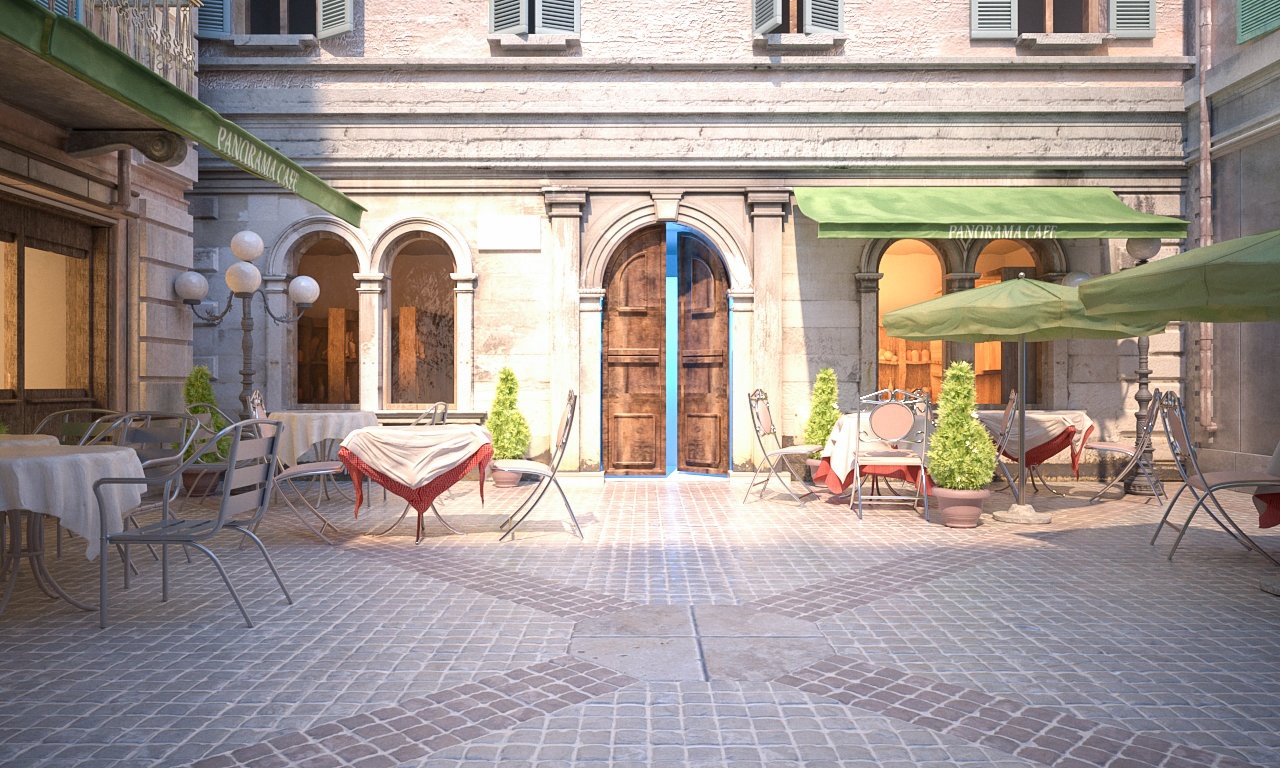 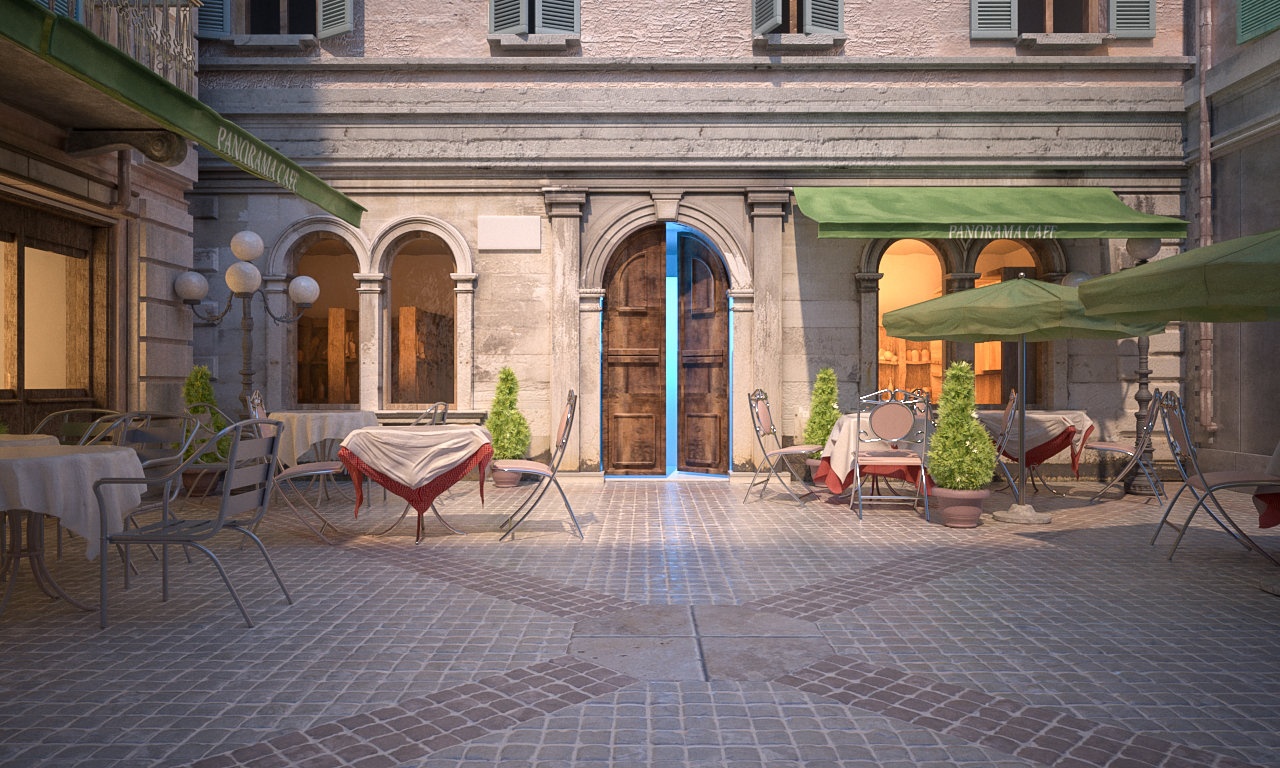 The images in this example show the effect of changing the Shutter Speed. The following constant settings were used for some parameters: Exposure is on, F-Number is 8.0, ISO is 200, Vignetting is on, and White Balance is white. 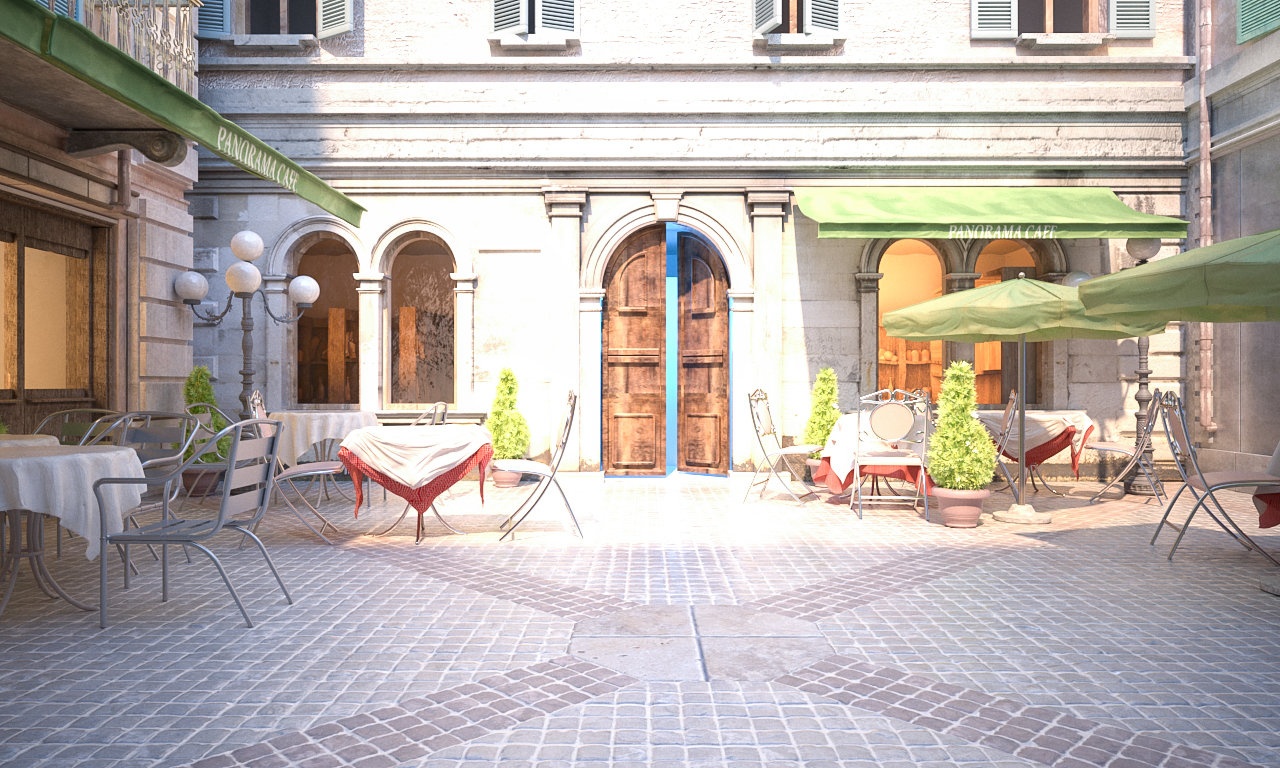 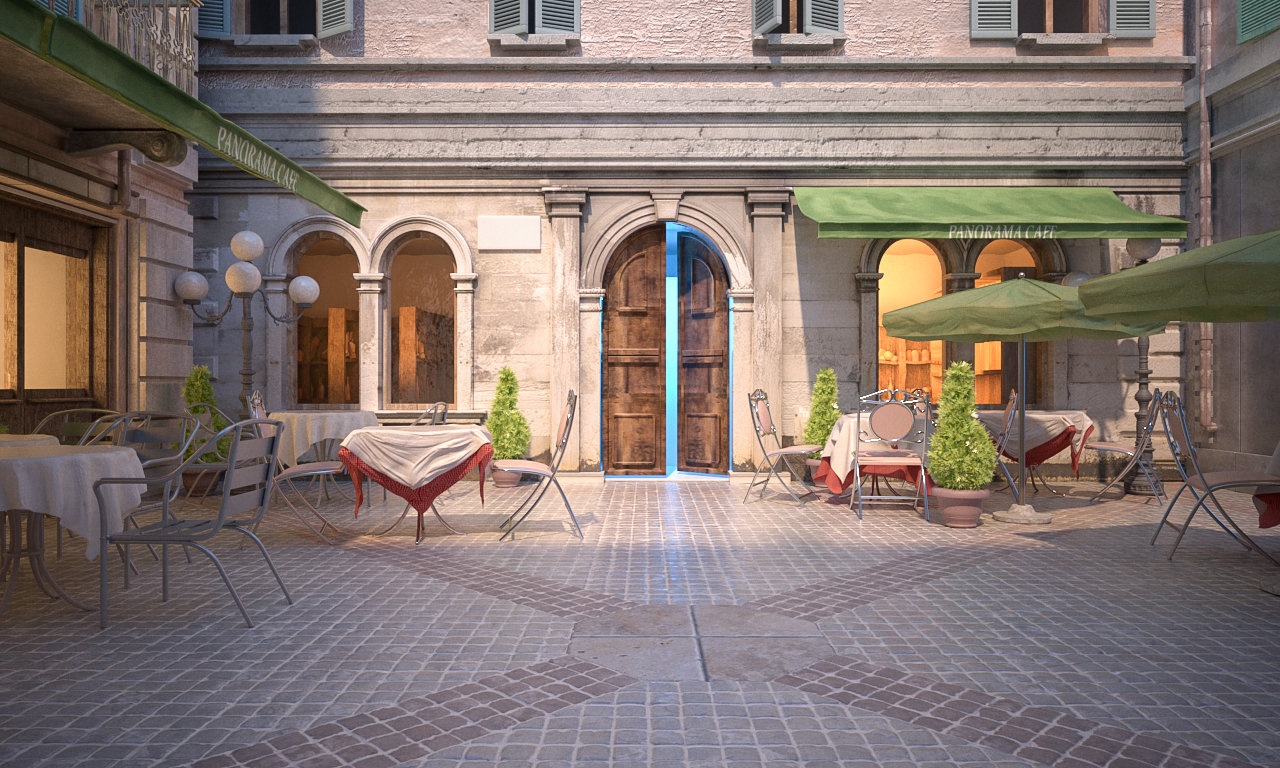 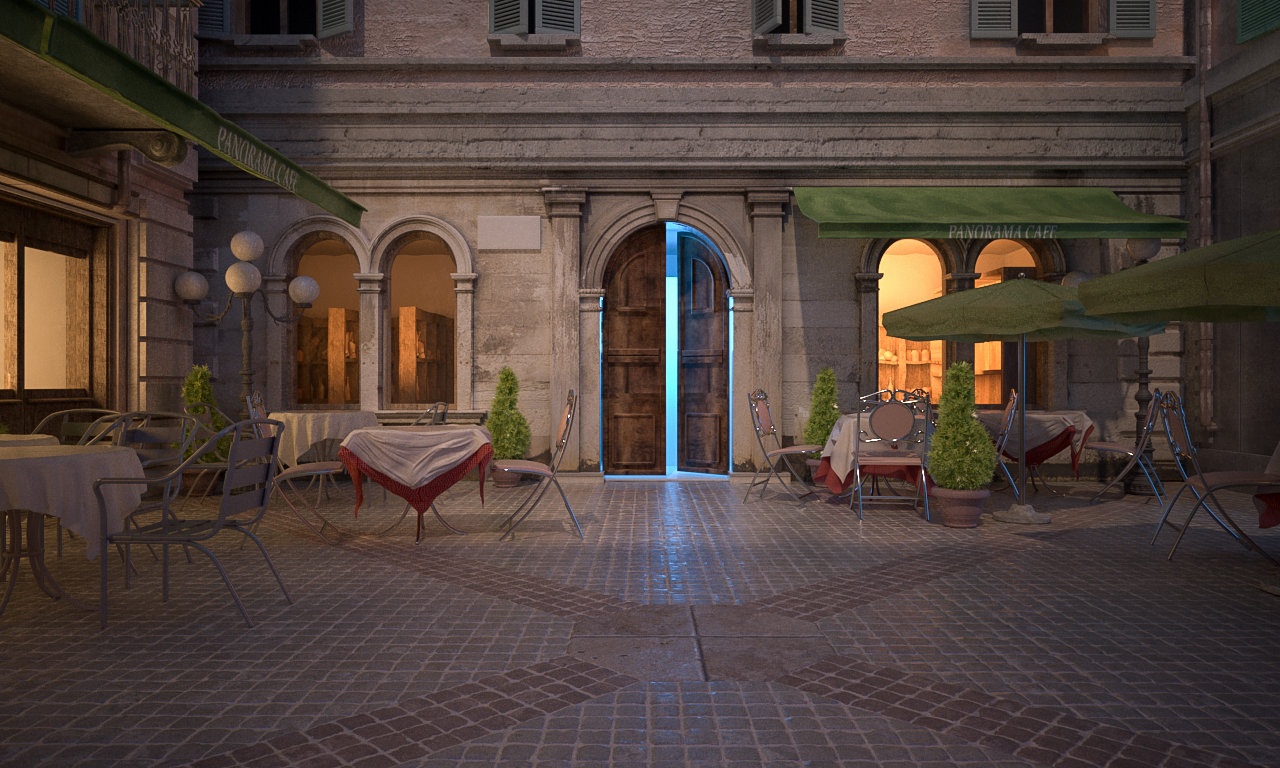 The ISO parameter determines the sensitivity of the film and consequently the brightness of the image. If the ISO value is high (film is more sensitive to light), the image is brighter. Lower ISO values mean that the film is less sensitive and produces a darker image.

The images in this example show the effect of changing the ISO. The following constant settings were used for some parameters: Exposure is on, Shutter Speed is 60.0, F-Number is 8.0, Vignetting is on, and White Balance is white. 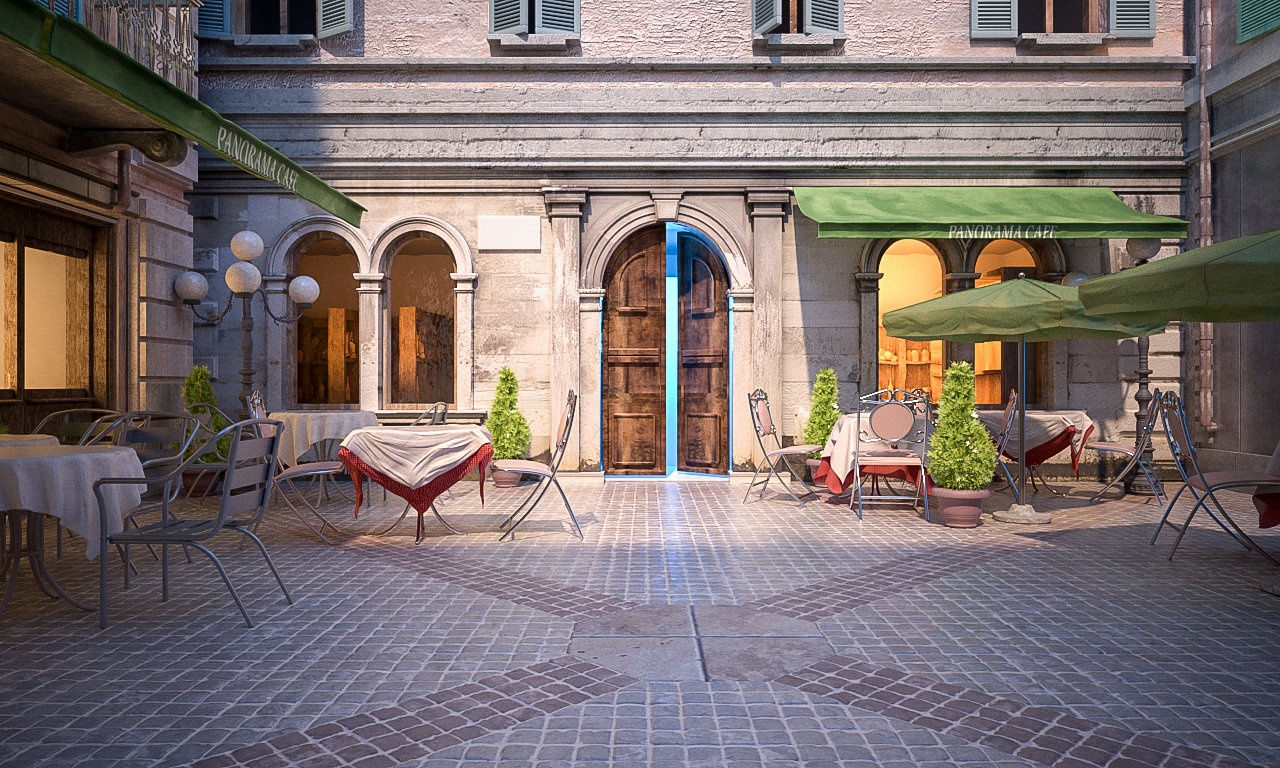 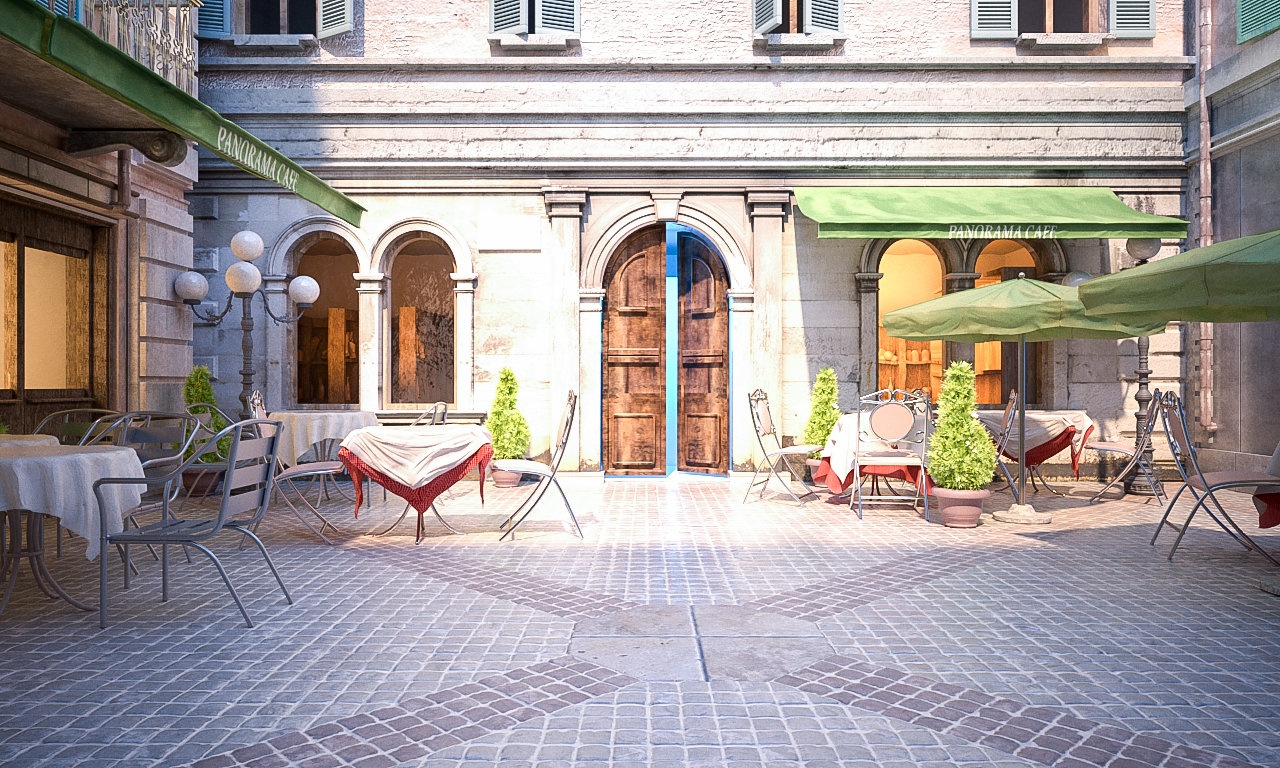 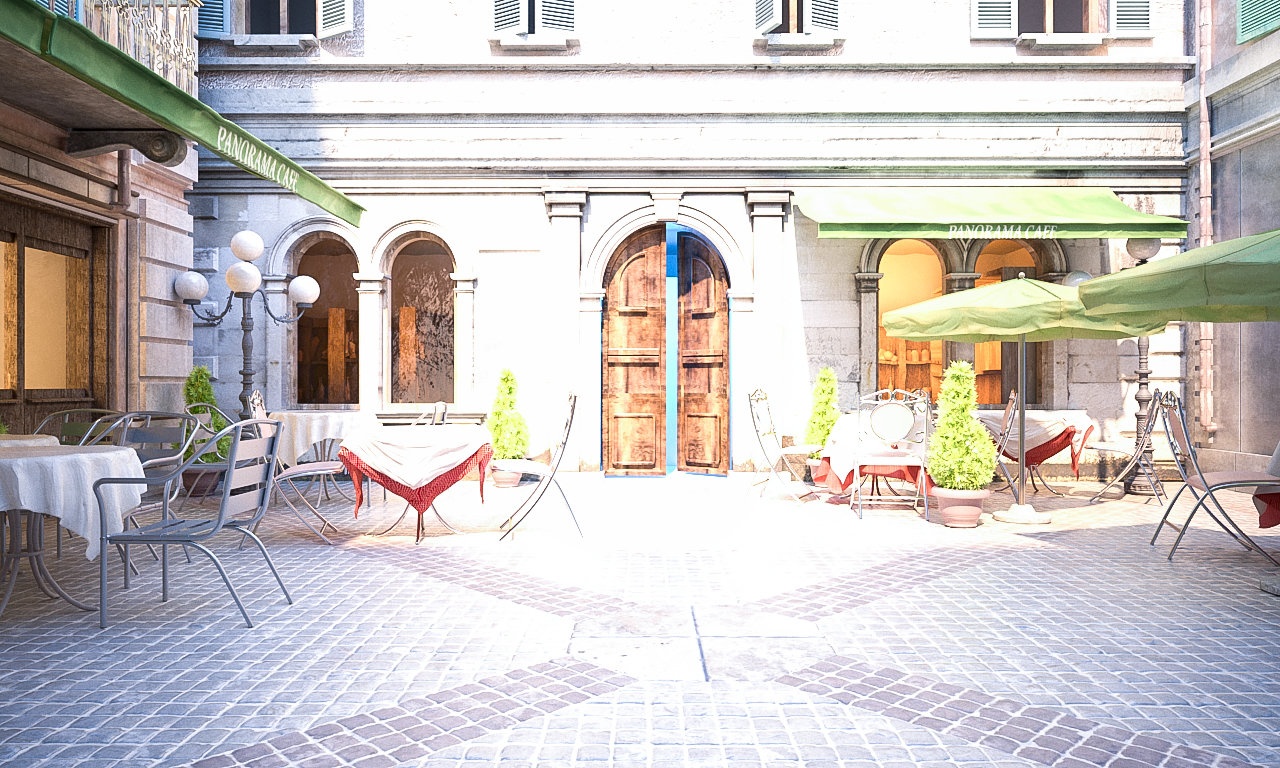 Using the White Balance color allows additional modification of the image output. Objects in the scene that have the specified color appear white in the image. E.g. for daylight scenes this should be peach color to compensate for the color of the sun light, etc.

The images in this example show the effect of changing the White Balance. The following constant settings were used for some parameters: Exposure is on, F-Number is 8.0, Shutter Speed is 200.0, ISO is 200.0, and Vignetting is off. 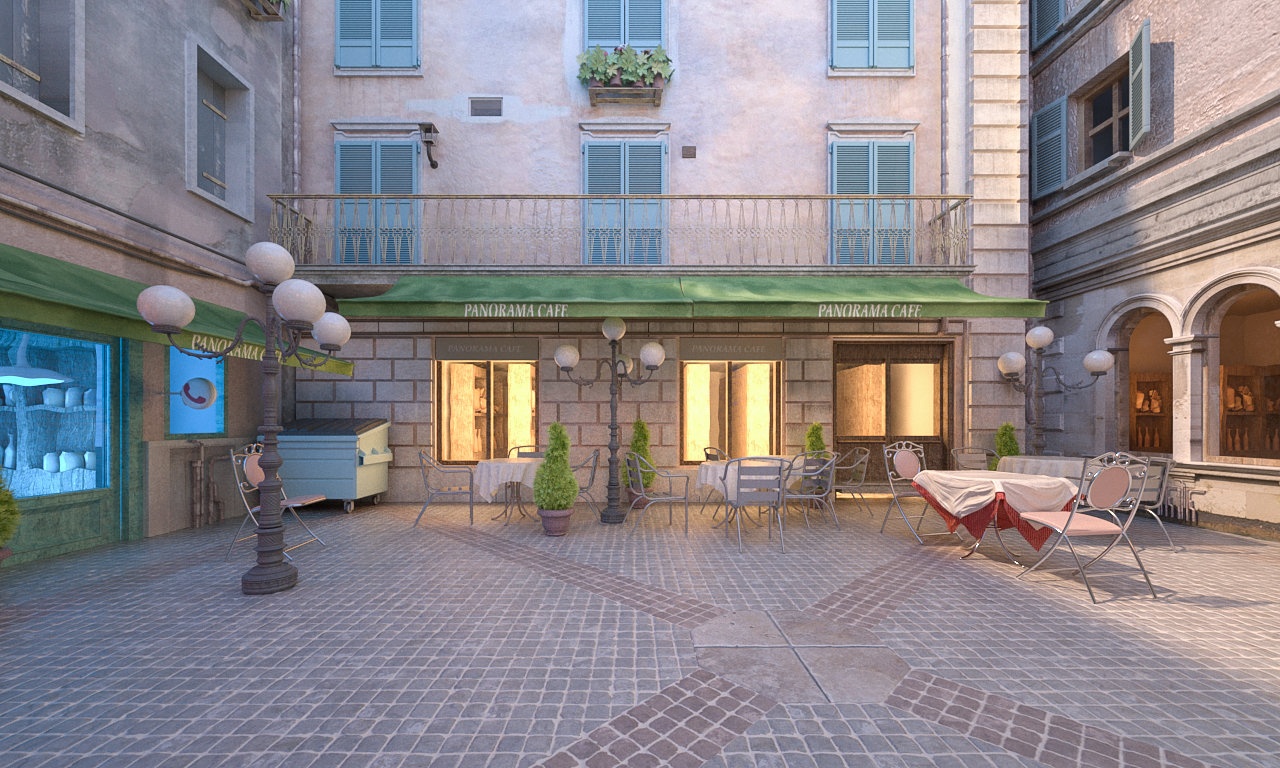 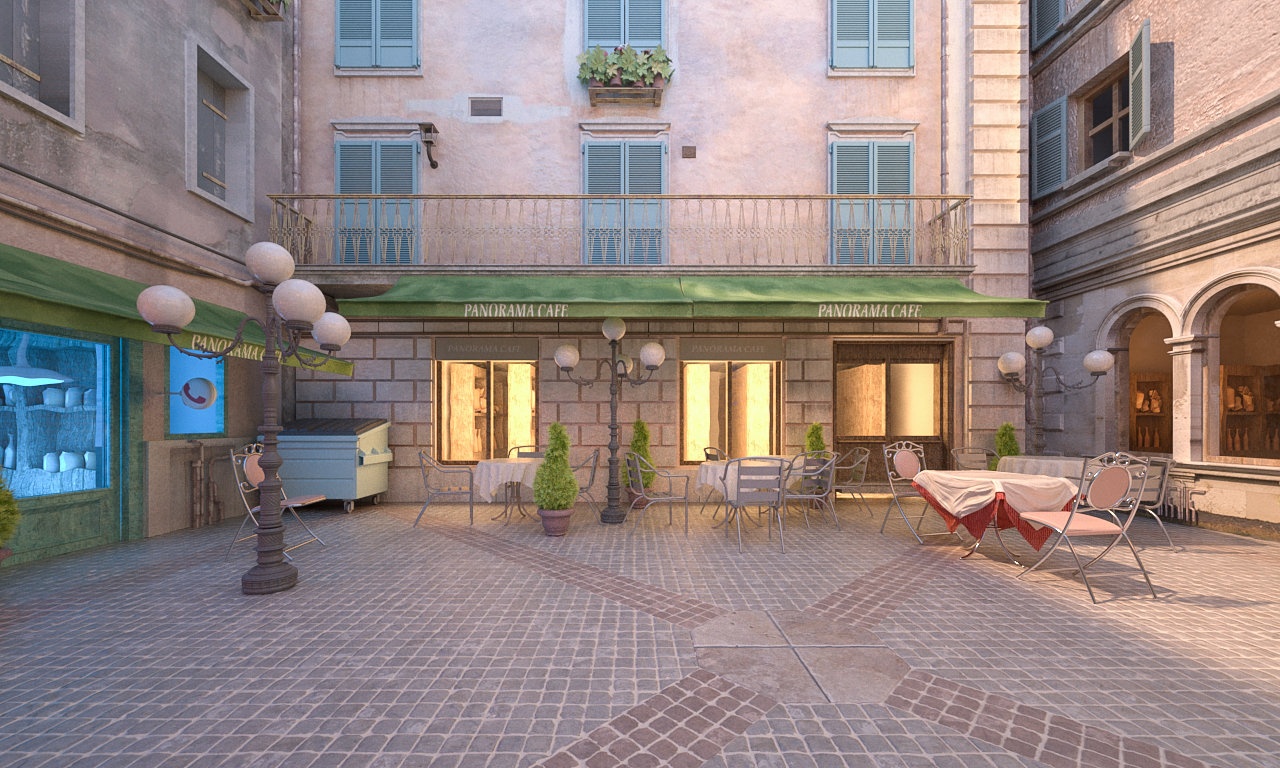 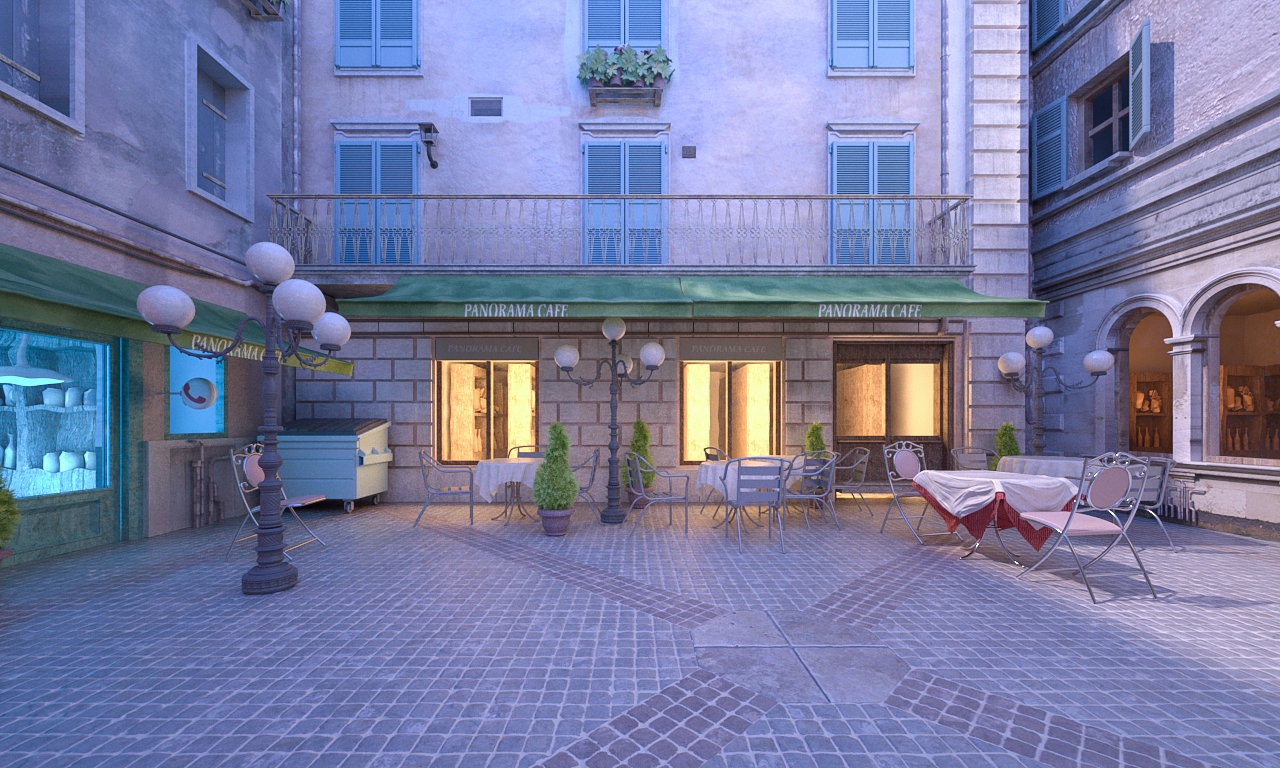 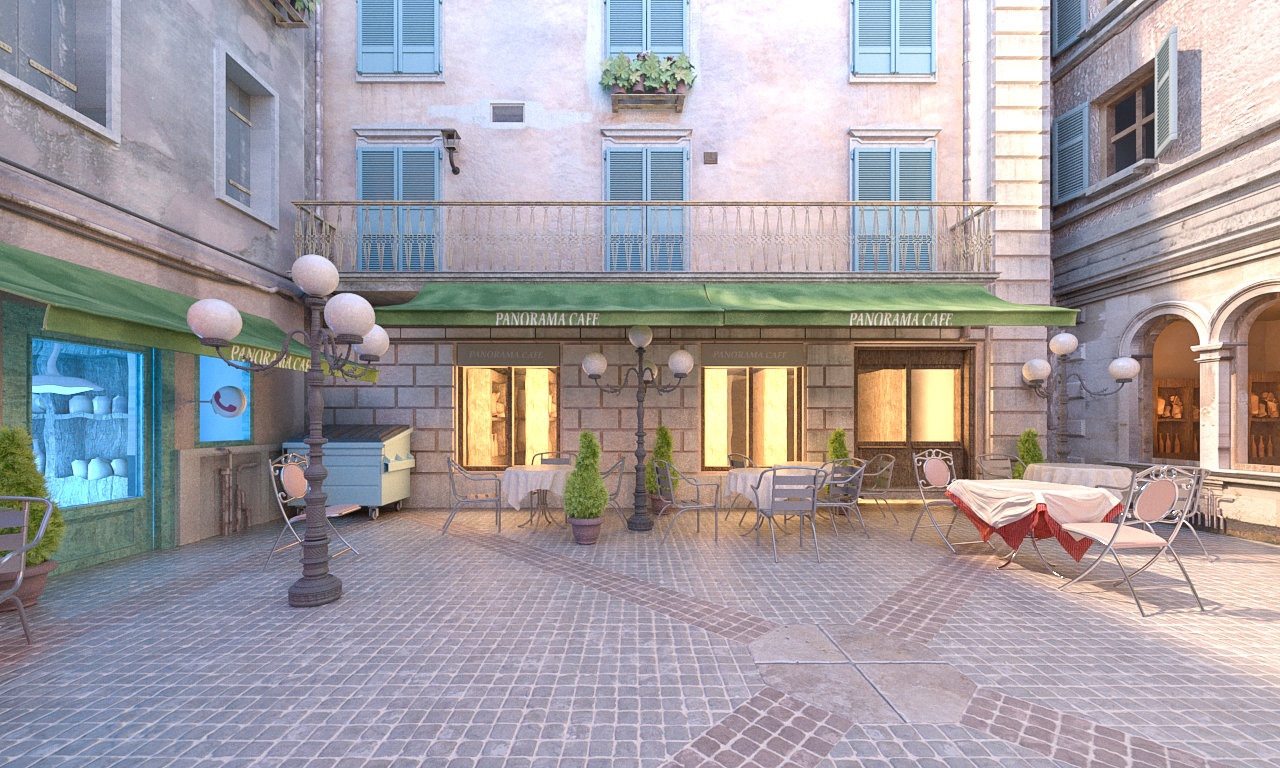 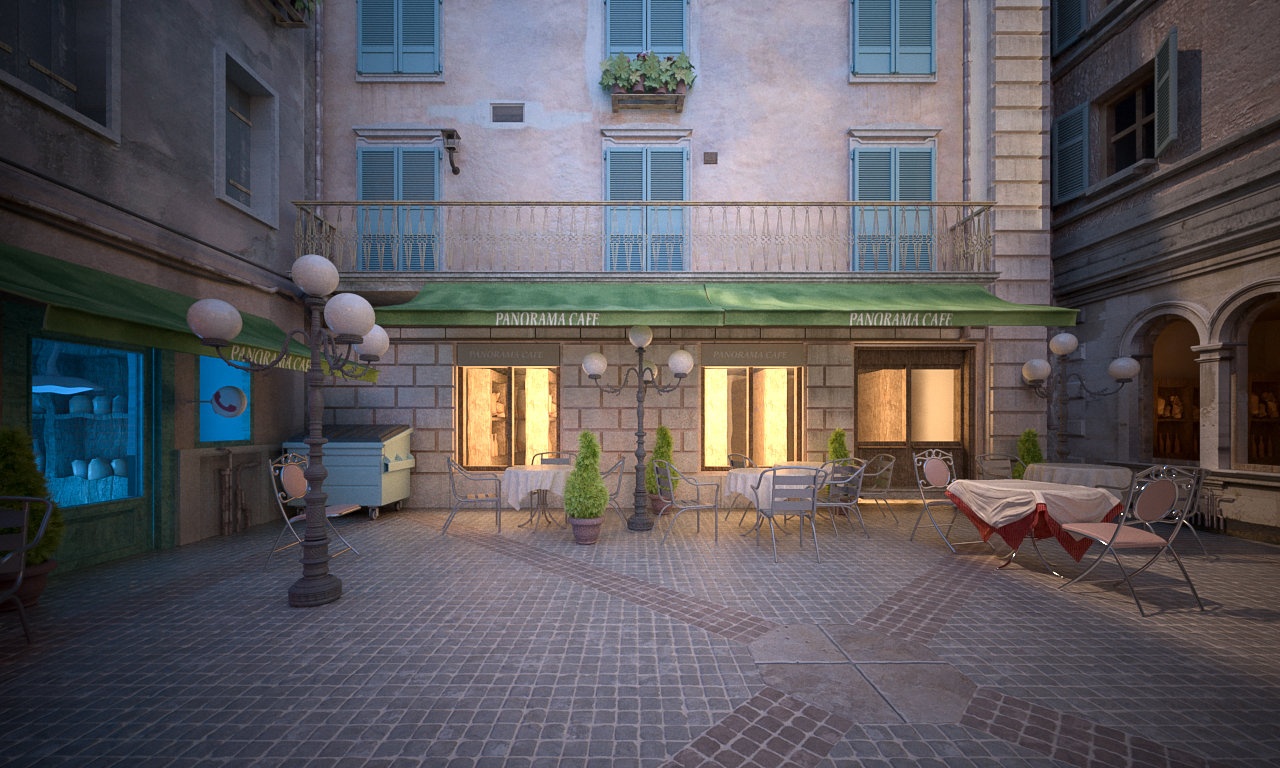 Enable DoF effect from the Depth of Field tab of the physical camera. The effect is most strongly seen when the camera is close to an object, for example when doing a macro photo. For a strong DoF effect, the camera aperture must be open wide (i.e. small F-Number value). That may lead to a very burnt and bright image, so to preserve the same illuminosity over the whole image, the Shutter Speed must be shortened. Last but not least the Focus Distance determines which part of the scene is actually on focus. To get the focus near, you need a small value and reverse - higher value for far focus.

For the images in this example, the following constant settings were used for some parameters: Exposure is set to Exposure Value, F-Number is 1.0, Exposure Value is 7.0, Shutter Speed is 125, Vignetting is off. 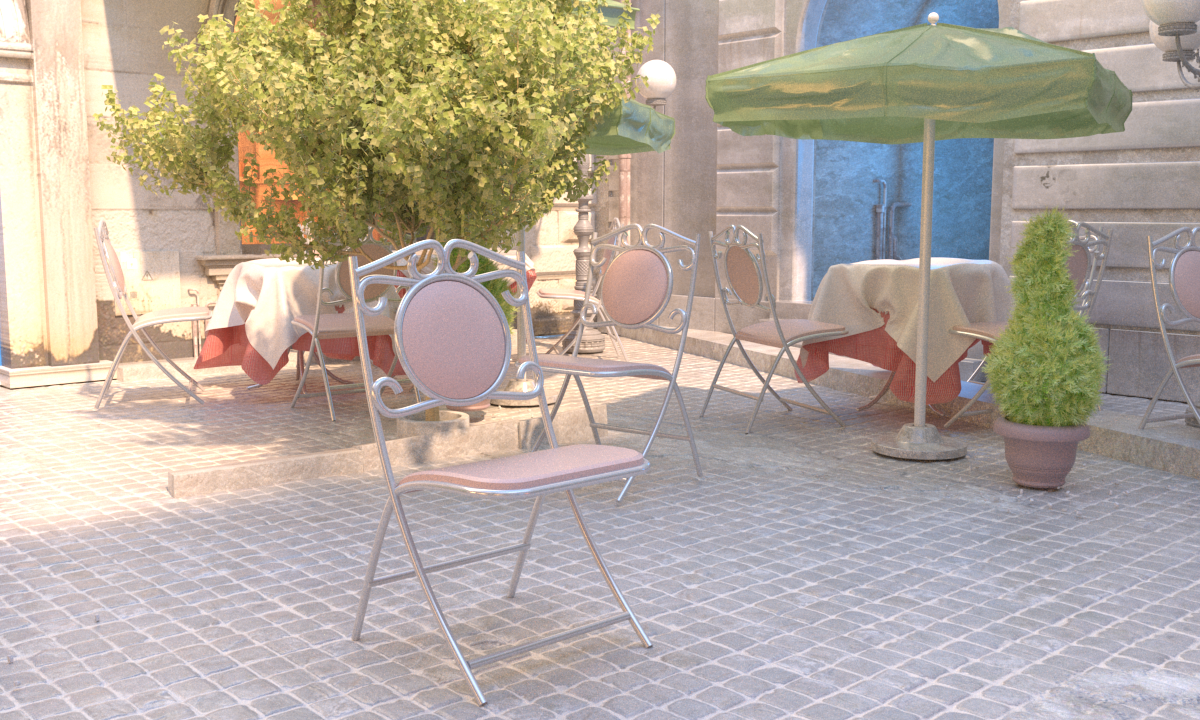 Depth of Field is off 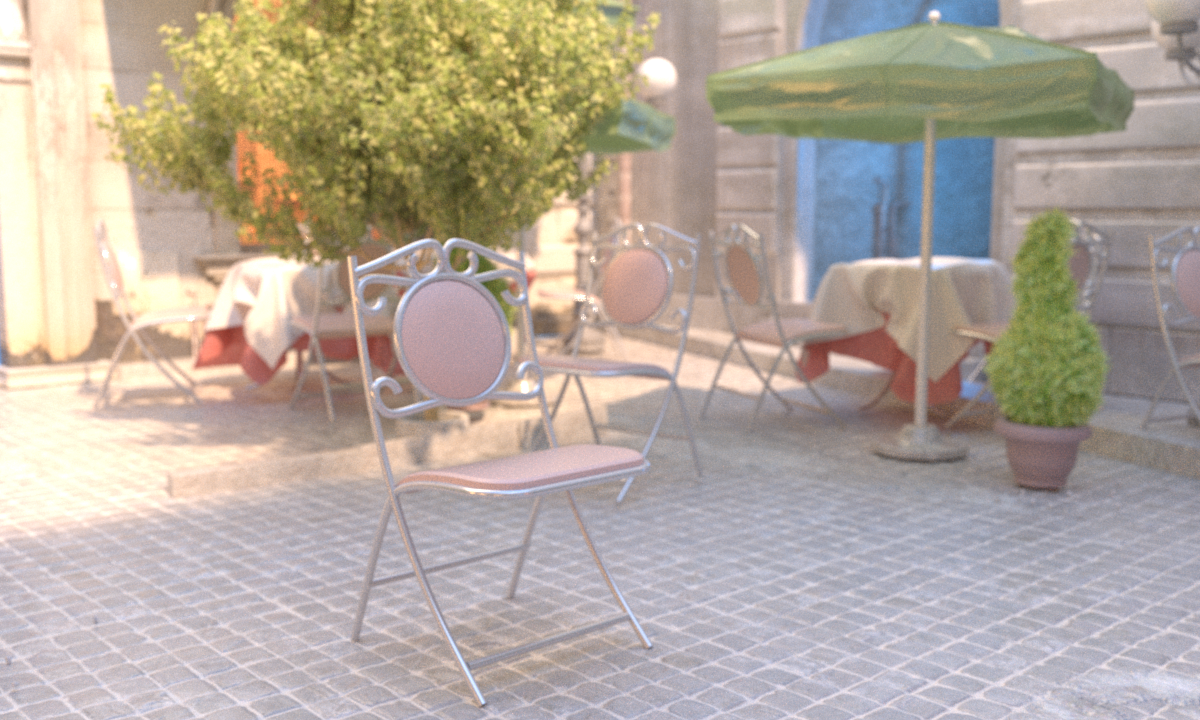 Depth of Field is on, Focus Distance is 3 m 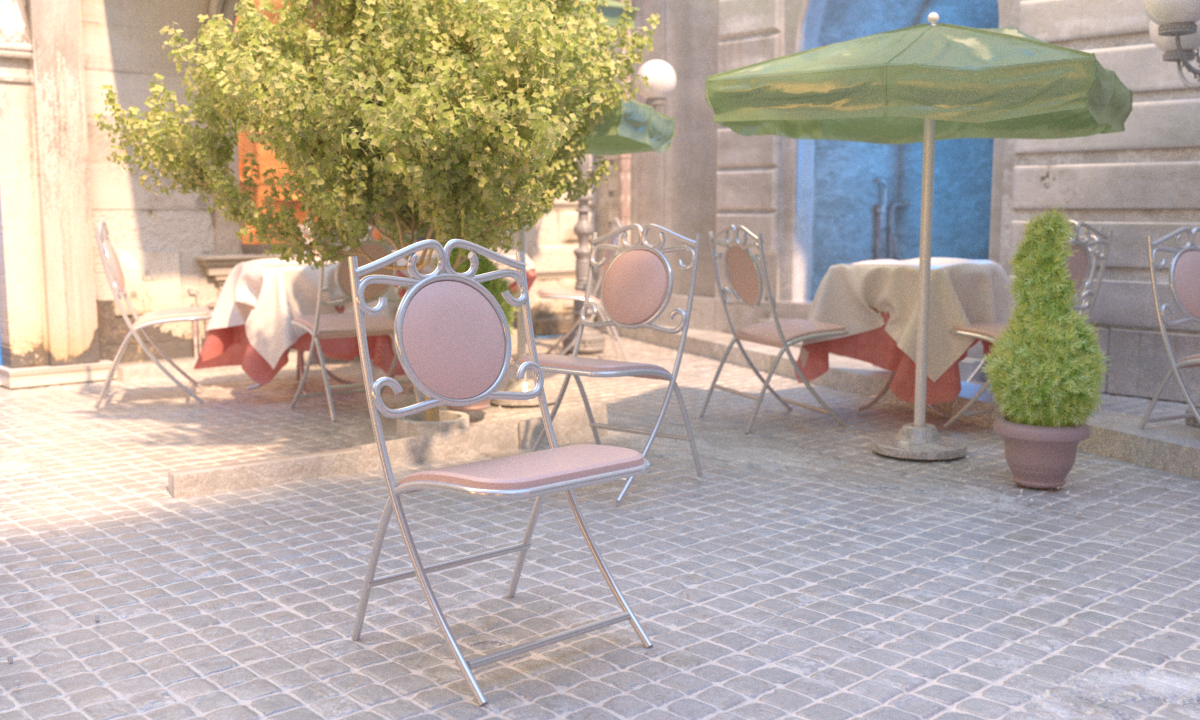 Depth of Field is on, Focus Distance is 5 m

Enable the Motion Blur effect from the Motion Blur tab of the physical camera. The amount of motion blur is determined by the speed of the moving object itself as well as the Shutter Speed setting of the camera. Long shutter speeds produce more motion blur, as the movement of the object is tracked over a longer time. In reverse, short shutter speeds produce less motion blur. Keep in mind that to preserve the same brightness over the whole image, the F-Number value has to be corrected as well.

In this example, the falling roof tiles are moving faster than the flower pot, which causes the difference in the motion blur effect. 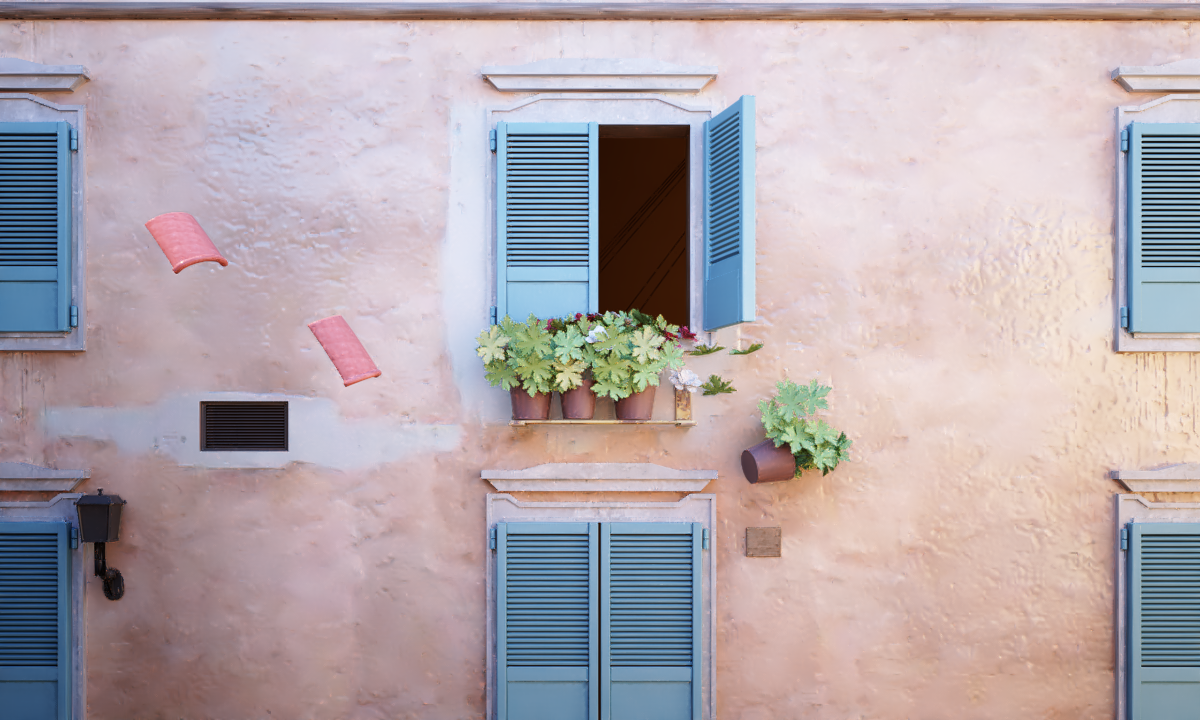 Motion Blur is off 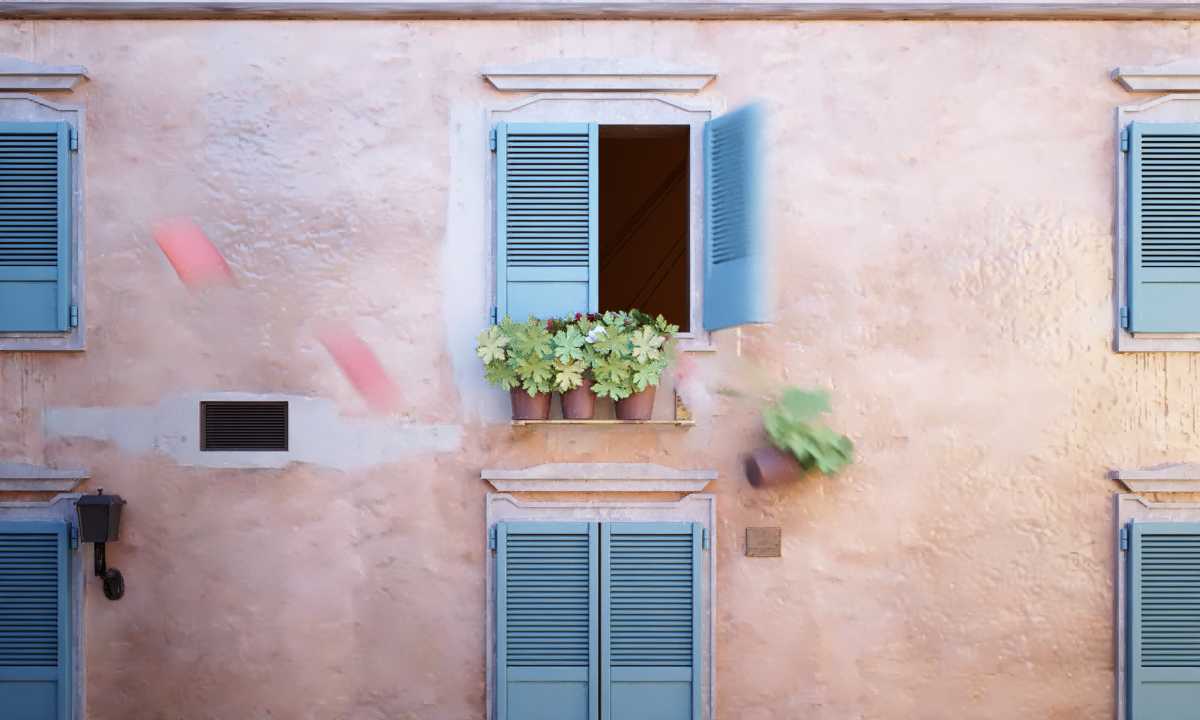 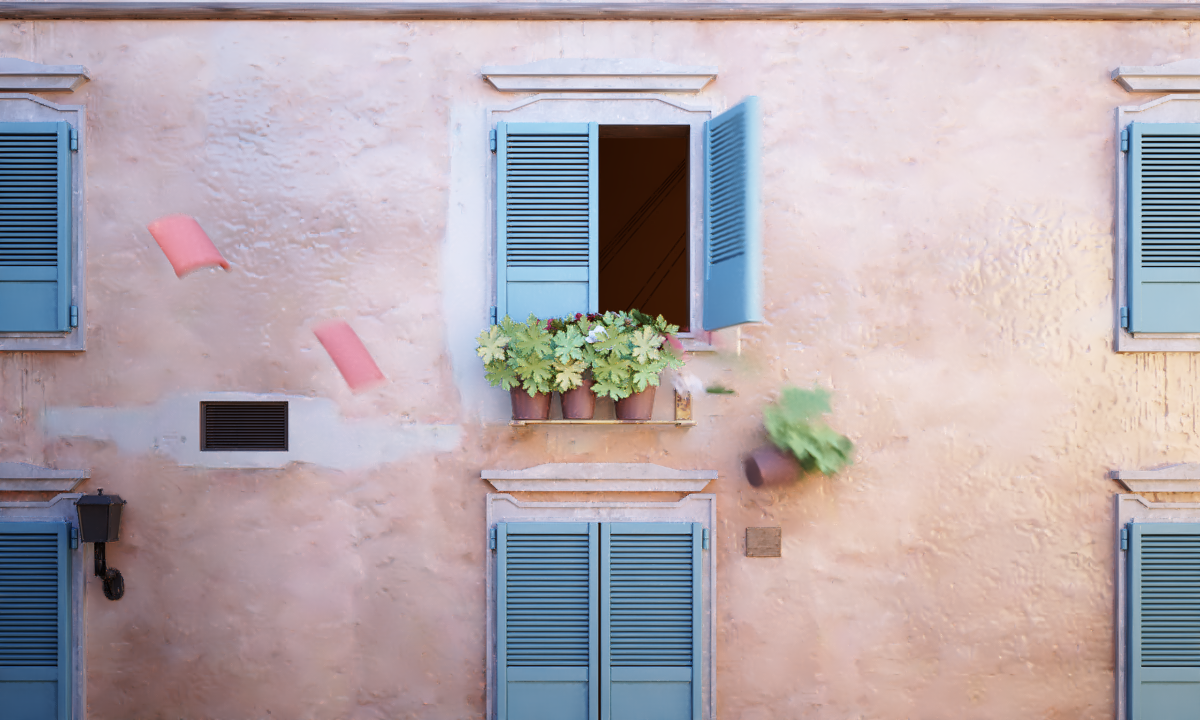