This page provides details on the Swarm rollout in the V-Ray Asset Editor.

The new V-Ray Swarm Rendering is a web-based distributed rendering system. It’s a simple, yet powerful way to split your rendering across multiple computers.

Each machine participating in the render job requires a V-Ray Render Node license. This includes the workstation initiating the rendering process.

Goal Slider – Sets the desired percentage of utilization of available resources. Computers added or removed to V-Ray Swarm are taken into account automatically.

) – Opens up the V-Ray Swarm web interface of the current Coordinator machine. Alternatively, it can be accessed by typing in the IP address of the current Coordinator machine on the default port 24267. This allows you to see the swarm render node machines available for rendering jobs in your network. You can see which of the render node machines are connecting to the particular machine that is casting out the render to the Swarm by the IP address next to its status. This interface allows you also to configure the render node machines, tag them, or monitor their resource utilization while rendering.

Tags allow you to tag this node with a descriptor that defines something about the machine, which we can later use to selectively control from inside of Rhino.

For example, tags can denote if this machine is one of a few that have a powerful GPU, or if a machine is not a workstation and a node on a render farm.

For information on how to use Tags, see the Swarm Configuration page.

Once the render process is initiated, machines marked with the selected tags load the scene and assist with the rendering. This is noted in both the Progress Log and the Current Usage bar located in the Swarm settings section.

All scene assets need to be transferred from the local machine to each render node machine before they can begin working on the job. If a render node machine's V-Ray version differs from that of the local host machine, V-Ray Swarm uploads the needed builds automatically and ensures that all the render nodes use the same V-Ray build.

The blue marker displays what part of all available machines are rendering the job, and the red marker shows the machines currently occupied with another job. More detailed information on the Current usage bar is displayed upon mouse-over.

The Goal slider beneath the bar can be adjusted dynamically to add or remove assigned machines during the rendering process. 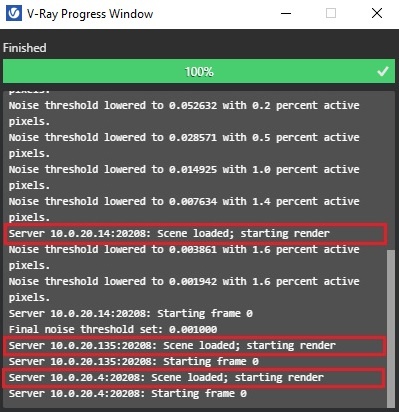 The Network Discovery settings control how a Coordinator is selected.

If the Auto-Discovery option is turned on, V-Ray automatically assigns the machine with the greatest network visibility as a Coordinator and uses it for render job management. The Coordinator machine is automatically changed if a different computer reports that it can communicate with more nodes than the current Coordinator.

Alternatively, the Network Discovery settings can be adjusted through the V-Ray Swarm web interface.

Coordinator IP – Manually sets a network machine to be the Coordinator node, which is used for render job management.

Limits the utilization of the local machine CPU to a maximum of one thread. Enabling the option lets you continue using your computer without noticeable slowdown, while the other Swarm nodes are rendering the image.

This setting is not available when the GPU is enabled.