In addition, you can also use CUDA in combination with your CPU device. This is the so-called Hybrid rendering – when CUDA performs raytracing calculations with the CPU, or simultaneously with both the CPU and GPU devices of your computer.

V-Ray GPU supports a variety of features and even more features are added with time.

The supported features of V-Ray GPU running on CUDA and RTX are the same.

Although CUDA and RTX share the same user interface as the V-Ray engine, V-Ray GPU differs from the regular V-Ray engine in the way it performs certain calculations. Comparing the results will never come to a one-to-one match, although it may look quite close. Furthermore, it is not the goal for them to be the same.

This is why, it is strongly recommended to not switch between engines in the middle of your project - if you start setting up a scene with the regular V-Ray engine, use it for the entire project. The render settings will only show the available options and your scene will be optimized for GPU rendering.

V-Ray GPU can be used as a production render or in interactive mode to quickly preview scene changes. It also supports both the Progressive and Bucket Image Samplers.

To enable GPU rendering, from V-Ray Asset Editor → Settings tab → Render rollout, select  CUDA or RTX engine. You can use it with both Progressive and Bucket Sampler types.

V-Ray GPU has a number of advantages:

Below is a list of tests we have performed and the results:

Rendering on multiple GPUs is supported, and by default, Interactive rendering for GPU uses all available GPU devices. See the sections below to learn how to choose devices on which to run IR GPU.

Тo use NVLINK on supported hardware, NVLINK devices must be set to TCC mode. This is recommended for Pascal, Volta and Turning-based Quadro models. For GeForce RTX cards, a SLI setup is sufficient. Also note that to prevent performance loss, not all data is shared between devices.

For more information, see the OptiX and NVLink FAQ page.

V-Ray GPU is not officially supported on macOS.

It works only with C++/CPU devices. V-Ray GPU can still be used in distributed rendering where a macOS machine runs the CUDA engine on a CPU device together with Windows/Linux machine(s) running CUDA engine on GPU device(s).

Choosing Which Devices to Use for Rendering

You may not want to use all available GPU devices for rendering, especially if you have multiple GPUs and you want to leave one of them free for working on the user interface or you may want to combine your CPU and GPU together (see the Hybrid Rendering section below).

There are two ways to do this: by using the supplied standalone device selection tool, accessible from both the V-Ray Tools menu and the Start menu search, or from the Asset Editor's GPU device dropdown list.

The GPU Device Selection tool is not available on macOS X.

When choosing the devices from the Asset Editor - it is done only for the current session in SketchUp. 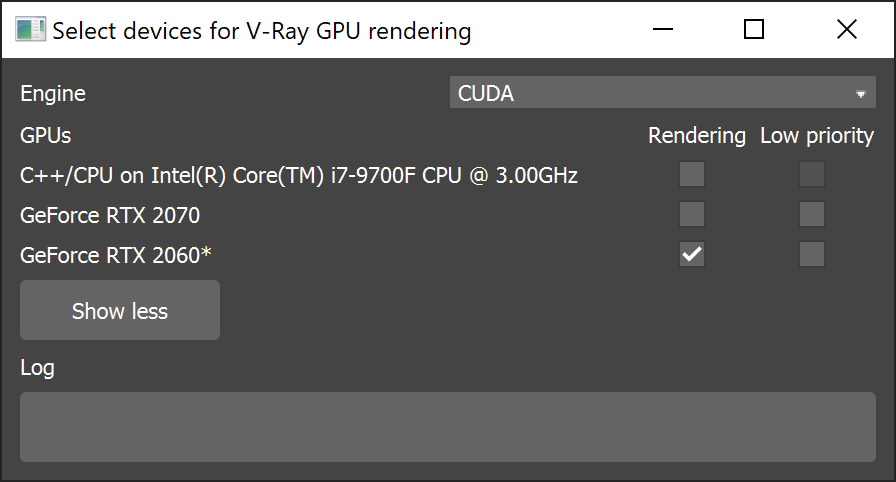 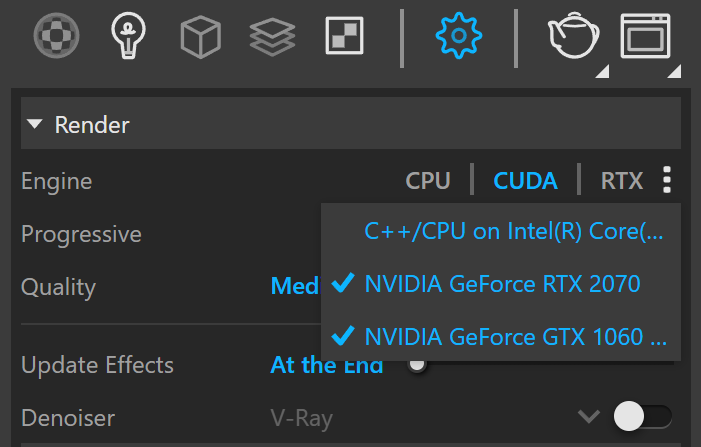 If you see your CPU listed twice, choose the option with "C++/CPU " in the name.

Hybrid Rendering with CPUs and the CUDA Engine

The hybrid rendering mode does not require any special drivers. Furthermore, you can use the CPU as a CUDA device even if you don't have an NVIDIA GPU and/or NVIDIA drivers installed. Meaning, this mode can be used on computers that don't even have GPUs. The hybrid render engine running on a CPU supports the same features as the regular V-Ray GPU CUDA engine.

Memory usage can be viewed from the Stats section of the new V-Ray Frame Buffer.