This page provides information on the New V-Ray Frame Buffer and its features.

The New VFB is much more than a render image holder window, with Light Mix capabilities for modifying the scene lighting after rendering and Layer Compositing for a higher level of post-processing adjustments.

See the VFB Overview page or the Courseware page for more information. 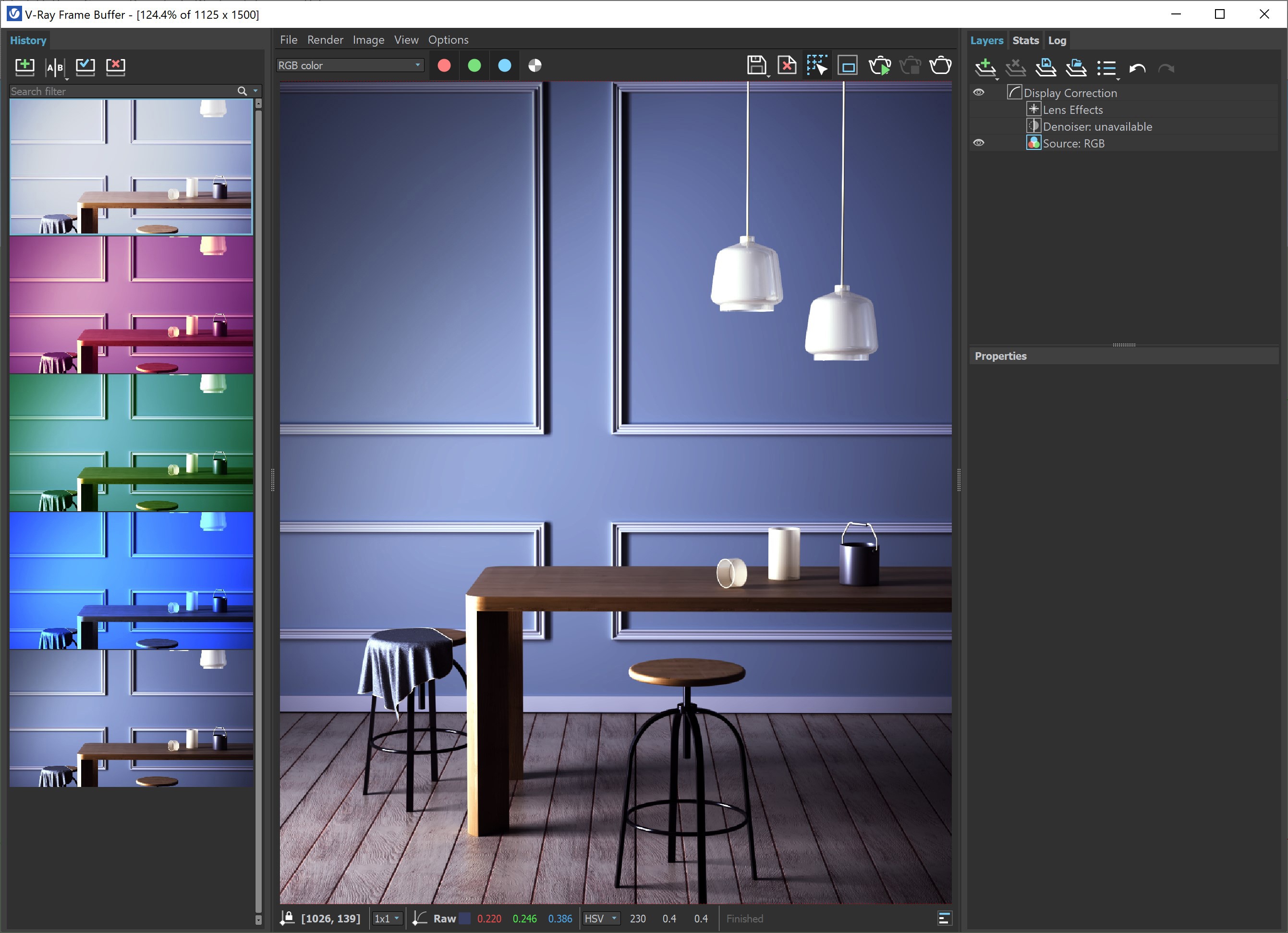 The V-Ray Frame Buffer menu holds the main frame buffer commands. Some of the options are also available in the VFB toolbar for quick access.

The V-Ray VFB keeps a history of previously rendered images and lists each with a number, thumbnail, and textual details in the Render history panel. Up to four images can be called from the history to be compared in the VFB (as shown below). History files are stored as .vrimg files in a user-specified folder. Render history settings can be configured in the VFB Settings window. 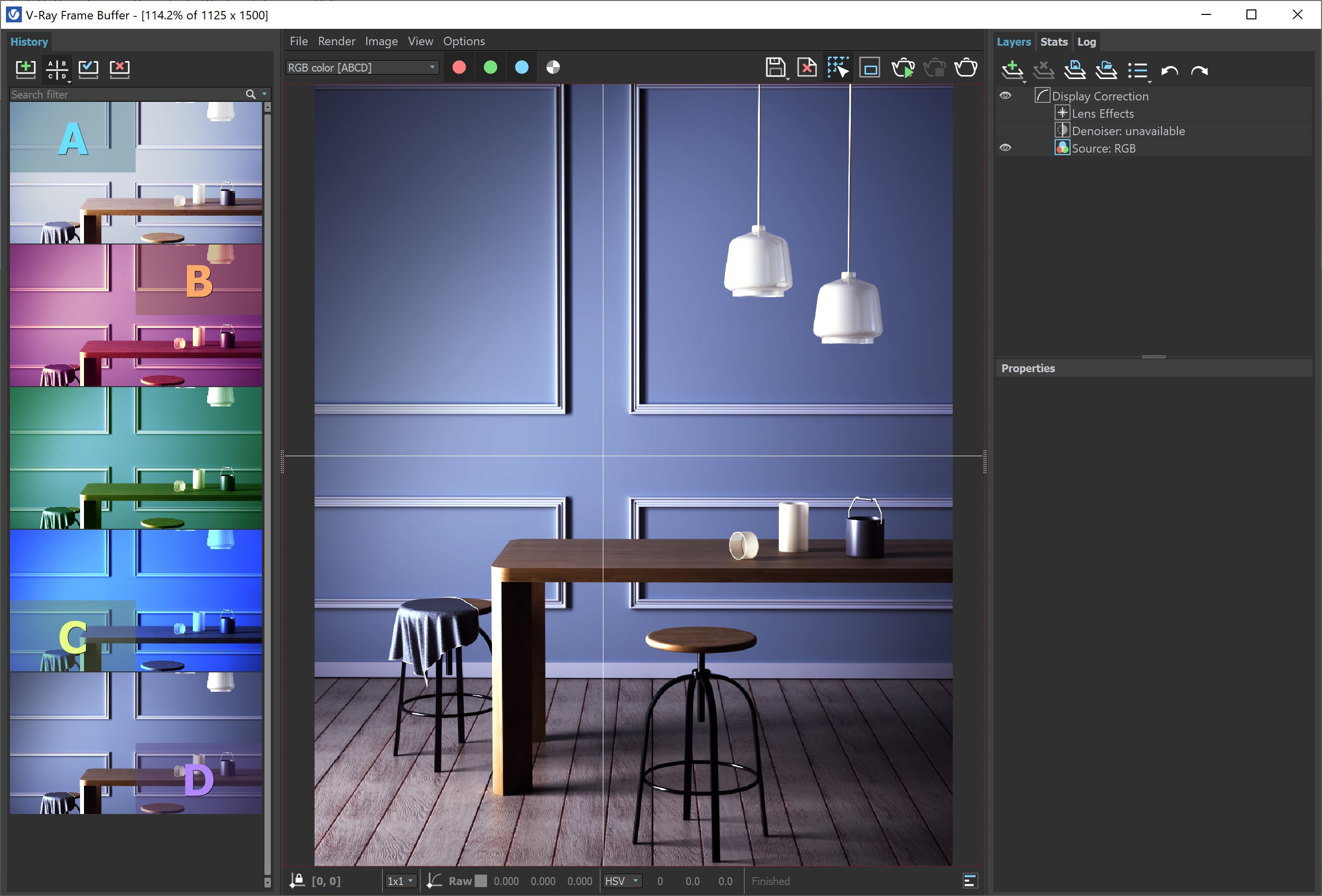 The keyboard keys from 1 to 9 can be used to quickly load the first 9 images from the history to the VFB.

Edit note – Allows you to add a text comment to the image; the comment appears below the image.

Set A – Sets the render as A image for A/B comparison.

Set B –  Sets the render as B image for A/B comparison.

Load to VFB – Loads the selected image in the VFB (same as double-clicking on the image).

Delete – Deletes the selected image from history. The image is moved to the system's Recycle Bin and can be restored from there if needed.

Open scene – Opens the rendered scene in the viewport. This option works as long as the initial file path of the scene has not changed after the render.

Copy scene path – Copies the full path to the scene.

Reload history – Re-reads the history image list. This may be needed if the history folder is updated outside of SketchUp (f.e. from another SketchUp session).

Manually saved .vrimg files can also be added to the History folder, but they need to be saved with all image channels in one .vrimg file to keep the complete image info.

The New V-Ray Frame Buffer includes a suite of color corrections and tools for adjusting the image. The tools are added as layers and displayed in a layer tree. You can enable or disable a particular tool using the visibility icon (

For more information on using the Layers, see the Layers page.

The Stats section provides track reports about the scene, the engine, the devices, the performance, and the memory.

Memory tracking is always enabled and there is no need for configuration. 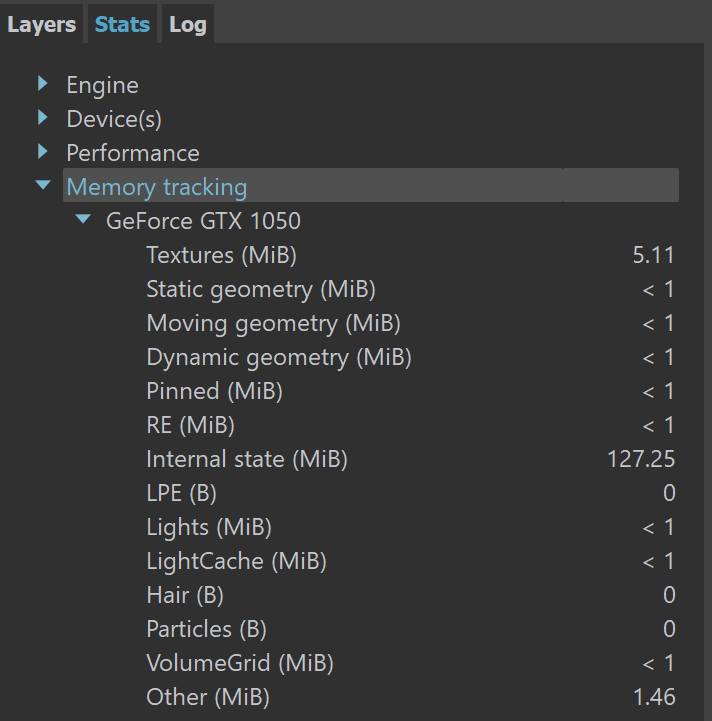 There are several view options to select from in the dropdown menu.

These shortcuts navigate through the VFB image. Please note that the VFB window must have the current focus for the shortcuts to have effect:

Region rendering can be used in both Interactive and Production modes to isolate only part of the frame for rendering. Usually, when a render region is used, you would like to save the whole frame instead of the region only.

When saving single-channel .exr files, the render region is ignored and a full frame is always saved. This applies when saving the .exr through VFB.

Saving .exr files, using the Render Output option of the Asset Editor, writes just the render region data in the file by default. The rest of the frame is rendered black.

Saving .exr files from VFB > Save all image channels to single file saves the render region on top of the previously rendered frame.