This page provides information on the System rollout in the Render Settings.

In this section you can control a variety of V-Ray parameters related to the overall operation of the renderer. 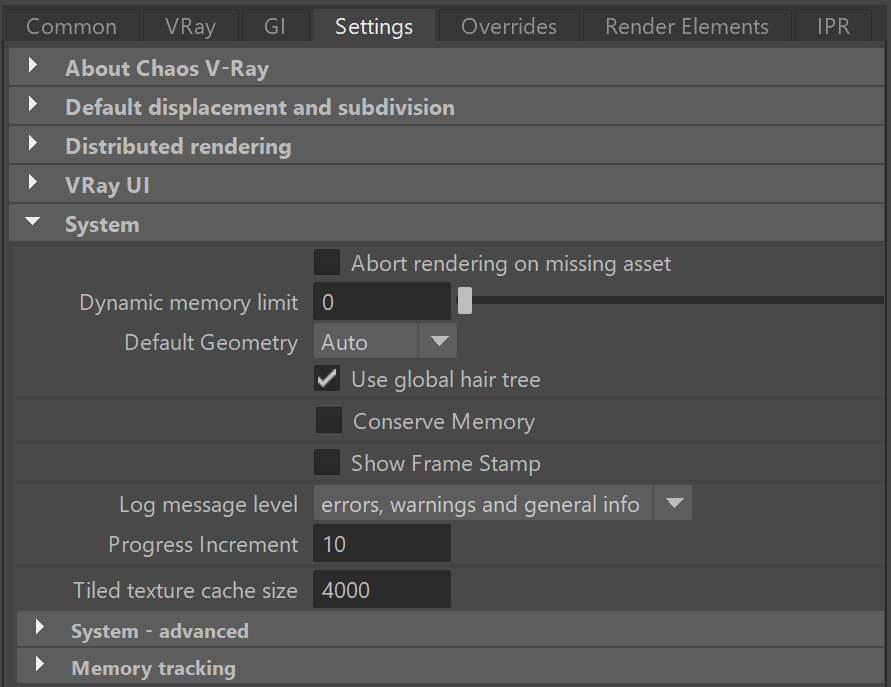 One of the basic operations that V-Ray must perform is raycasting, the process of determining if a given ray intersects any geometry in the scene, and if so, identifying that geometry. From a technical perspective, the simplest way to implement raycasting would be to test the ray against every single renderable triangular face in the scene. Obviously, in scenes with thousands or millions of triangles, this would be very slow. To speed this process, V-Ray organizes the scene geometry into a special data structure called a binary space partitioning (BSP) tree.

The settings in this area of the System rollout control various parameters of V-Ray's Binary Space Partitioning ( BSP ) tree.

Abort rendering on missing asset – When enabled, the scene will not render if an asset fails to load. When DR is used, the DR server(s) that didn't successfully receive an asset will be excluded from rendering.


Dynamic memory limit – The total RAM limit for the dynamic raycasters, which store dynamic geometry, such as displacement and VRayProxy objects. Set this to 0 to remove any limit (V-Ray takes as much memory as needed) The memory pool is shared between the different rendering threads. Therefore, if geometry needs to be unloaded and loaded too often, the threads must wait for each other and the rendering performance suffers.

Default Geometry – Internally V-Ray maintains four raycasting engines. All of them are built around the idea of a BSP tree, but each has different uses. The engines can be grouped into raycasters for non-motion blurred and for motion blurred geometry, as well as for static and dynamic geometry. This parameter determines the type of geometry for standard Maya mesh objects. Note that some objects (displacement-mapped objects and VRayProxy File Formats for example) always generate dynamic geometry, regardless of this setting.

Auto  – Some objects are compiled as static geometry, while others as dynamic. V-Ray makes the decision on which type to use based on the face count for an object and the number of its instances in the scene.
Static  – All geometry is precompiled into an acceleration structure at the beginning of the rendering and remains there until the end of the frame. The static raycasters are not limited in any way and will consume as much memory as necessary.
Dynamic  – Geometry is loaded and unloaded on the fly depending on which part of the scene is being rendered. The total memory taken up by the dynamic raycasters can be controlled by the  Dynamic memory limit parameter.

The frame stamp is a convenient way to tag or record information about the scene as text on rendered images. For example, frame stamps can be used with network rendering to record which frames were rendered by which machine. The frame stamp appears as one line of text at the top or bottom of the image. See also the Stamp layer parameters on the Layers page.


Show Frame Stamp – Turns the frame stamp on and off.

Frame Stamp – The keywords used to render the stamp tokens or keyboards (see table below).  These keywords are replaced by V-Ray with the corresponding value:


* An intersectable primitive is a primitive that provides a direct method for intersection with a ray (such as a triangle, the infinite plane generated by a  VRayPlane plugin etc). Most often, the number of these primitives is the same as the number of triangles (faces) processed by V-Ray for the current frame. Note that this may be different from the total number of triangles in the scene. With the dynamic raycaster, only geometry that is actually needed is generated and accounted for. Geometry that is not generated is not included in this count.

Vertical Alignment – Specifies where to print the information. The available values are Top and Bottom

Justify   – Specifies the position of the stamp:

These parameters control the V-Ray messages displayed in the Output Window. During rendering, V-Ray writes various information in the file vray4maya_log.txt located in the Windows temporary folder. The Output Window shows some of that information so that you can view it without the need to manually open that file.

Each message falls into one of four categories: Errors, Warnings, Informative messages and Debug messages.


Log message level – Determines which messages, if any, are going to be displayed in the Output Window.

Tiled texture cache size – Specifies the size, in megabytes (MB), of the texture cache to be used for tiled OpenEXR and tiled TIFF files. This parameter has a similar function to the VRAY_TEXTURE_CACHE environment variable and is not applied, if it has a lower value than it.

Max render threads – Determines how many threads will be used by V-Ray for rendering. When this value is set to 0, V-Ray will use all the CPU cores available on the machine.

Output directory – Specifies the location to save the memory reports. The default location is the user temp directory.

Post effects rate – The regularity of updates during progressive rendering; roughly the percentage of the time effects like denoising and/or lens effects are allowed to take compared to the frame render time. Zero disables updates during progressive rendering, while larger values cause the effects to be updated more frequently; 100 causes updates as often as possible. Values ranging from 5 to 10 are usually sufficient. For IPR, the value is internally set to 100, unless the value was manually set lower than 10.