Please see the V-Ray GPU Setup page in addition to the FAQ.

Which features are supported on the GPU?

The code base for V-Ray GPU differs from the code base for the CPU engine. The GPU code base is optimized for GPU hardware and supports a subset of the features of CPU rendering. For a complete list of supported features, please see the V-Ray GPU Supported Features page.

Can I choose which devices are used for GPU rendering?

Yes. See the GPU setup section for instructions on how to do this.

Why does my UI become sluggish when I use V-Ray GPU?

V-Ray displays a warning if the GPU used for monitoring is participating in the rendering process.

How can I reduce network bandwidth when using GPU in a heavy DR setup?

If you use many GPUs in DR nodes you might find that the network develops a bottleneck at some point due to the GPUs producing data very fast. To increase the size of the workload chunks that are being given to the DR nodes and help reduce the communication between the client and the servers, increase the Ray bundle size and Rays per pixel parameters in the GPU Performance Tab in the Render Setup dialog. Try values like 192/32 or 256/64.

How do I check the memory usage on the GPU and how do I reduce the GPU memory needed for my scene?

You can use free 3rd party tools like MSI Afterburner and EVGA Precision to monitor both GPU memory usage and utilization.

V-Ray GPU also reports how much memory it uses for textures/geometry/Light Cache/etc. in the V-Ray log.

How do I setup V-Ray GPU as my production renderer? What are the differences between IPR and Production mode?

You can set it by selecting V-Ray GPU from the Renderer dropdown when the Target drop-down is set to Production Rendering Mode from the top of the Render Setup window, or also by adjusting the selected renderer to V-Ray GPU in the Production setting found in the Assign Renderer rollout at the bottom of the Common tab. The main differences are that the IPR mode is interactive and the Production Rendering Mode is not. Production rendering allows you to render animations, and V-Ray calculates and uses Light Cache for GPU GI calculations if it has been set as secondary GI engine.

How do I use Light Cache with GPU?

Light Cache can be used as secondary GI engine with V-Ray GPU for both production rendering and IPR. Brute Force is always used as the primary GI engine.

Why do the bump maps look different?

All procedural textures are supported for GPU bump maps, but because V-Ray GPU is a very different engine, the bump map itself can look a bit different compared to V-Ray.

How to do Stereo Rendering using GPU?

In Render Setup > Settings tab > Stereoscopic rendering (when V-Ray GPU is the renderer) - choose your desired mode. The VRayStereoscopic helper is not supported in V-Ray GPU.

Why doesn't my displacement / textures / etc. show up?

There are global switches that turn them off. Check the Render Setup window > Settings tab > Global switches rollout (when V-Ray GPU is the renderer). 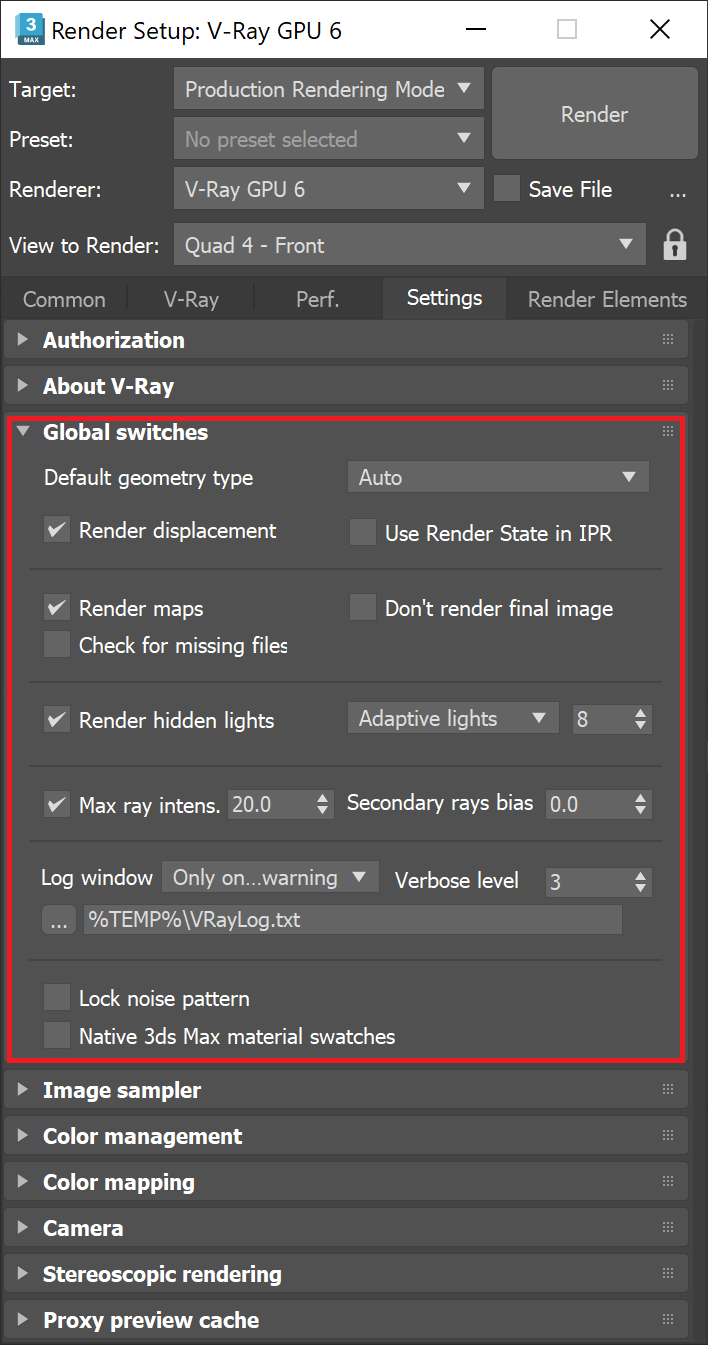 How can I check which devices on my system can be used for GPU rendering? Why my devices are not listed?

Check the list of devices in the GPU settings tab. Keep in mind that in certain setups 3ds Max does not recognize some of the devices. If you don't see your device on the list there (the list is empty), try to uncheck the In process checkbox. This makes V-Ray run as a separate process, working around the limitation.

If 3ds Max doesn't properly recognize any CUDA devices, V-Ray automatically fallbacks to using the CPU for CUDA calculations (as if the c++/cpu device was selected for CUDA rendering). 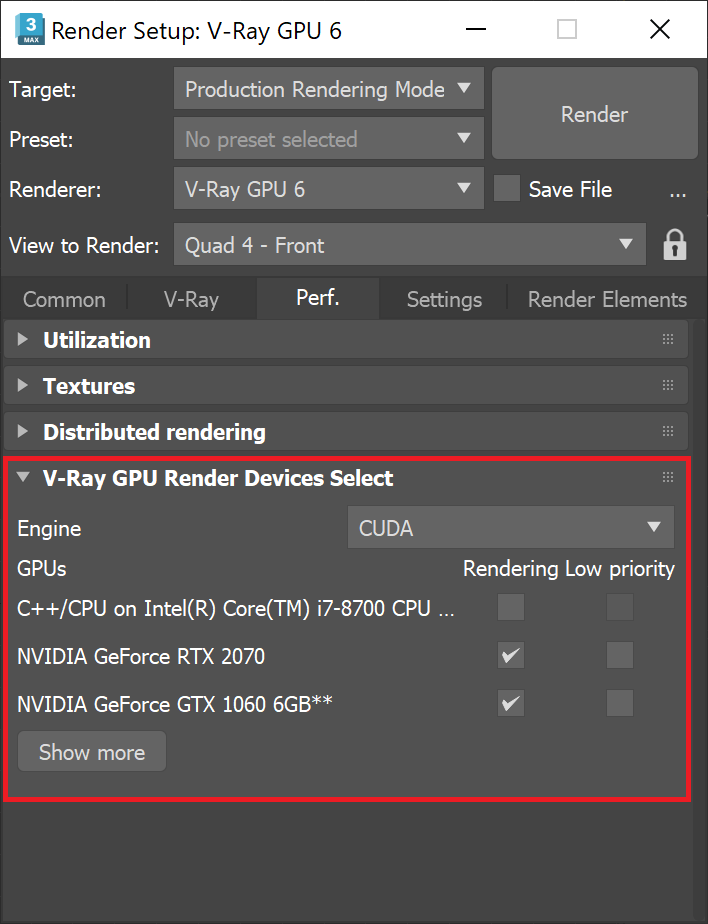 Why is the GPU rendering not many times faster than the CPU rendering?

The difference in render speeds depends on the video cards and the CPUs that are compared, as well as on the scenes used as benchmarks. It is normal to achieve a big speed boost with the GPUs compared to the CPU with some scenes and to have comparable performance with others.

Can I use multiple systems with GPU devices to speed up my rendering?

Yes, you can speed up your rendering using DR on multiple systems with CUDA/OpenCL enabled devices.

Keep in mind that if some Windows drivers may have limitations and may not be able to use GPUs if there is no monitor attached to the machine or you are logged in via Remote Desktop. Check the GPU vendor documentation for more information.

Can V-Ray GPU be used as production render?

Yes, within its limitations.

Can V-Ray GPU be used with Motion Blur?

If you're trying to use matte materials in situations like making a shadow catcher, V-Ray GPU does not render objects with matte properties correctly unless the Elements Active checkbox is enabled under the Render Elements tab of the Render Setup window.

Why do some parameters appear greyed out and can't be used?

How is the memory utilized when rendering with more than one GPU card?

The GPU memory usage is limited to the device with least memory. For example,  if the setup consists of three GPUs with 4, 8, and 12GB memory only up to 4GB is used. The same cap applies when using CPU device for CUDA rendering.

Why can't I change the Bucket size when using the CUDA render?

Due to GPU utilization during the rendering process, Bucket size cannot be changed and is automatically determined for your frame. However, the Bucket size is not dynamic (the size of the buckets do not change during rendering).