This page gives information on the V-Ray Denoiser Render Element.

The V-Ray Denoiser detects areas where noise is present in the rendered beauty image and render elements and smooths them out. Images can also be denoised using the standalone vdenoise tool included with the installation of V-Ray for 3ds Max.

For animations, it is recommended to use the standalone denoiser tool. It performs frame blending and reduces flickering.

The V-Ray Denoiser performs an additional operation to the rendering and changing the denoising settings and denoising the image again does not require re-rendering the scene.

When rendering, the V-Ray Denoiser automatically adds a few render channels in the V-Ray Frame Buffer which are required to guide the denoising algorithm. The denoising engines require different render elements. Some of them are standard render channels like the diffuse filter color, the reflection filter color etc. A few special channels are also generated for the Default V-Ray denoiser:

VRayDenoiser is also applied in Viewport IPR when the mode of the render element includes denoiser result channel calculation. It can be disabled for Viewport IPR by setting the Post effect rate value to zero. 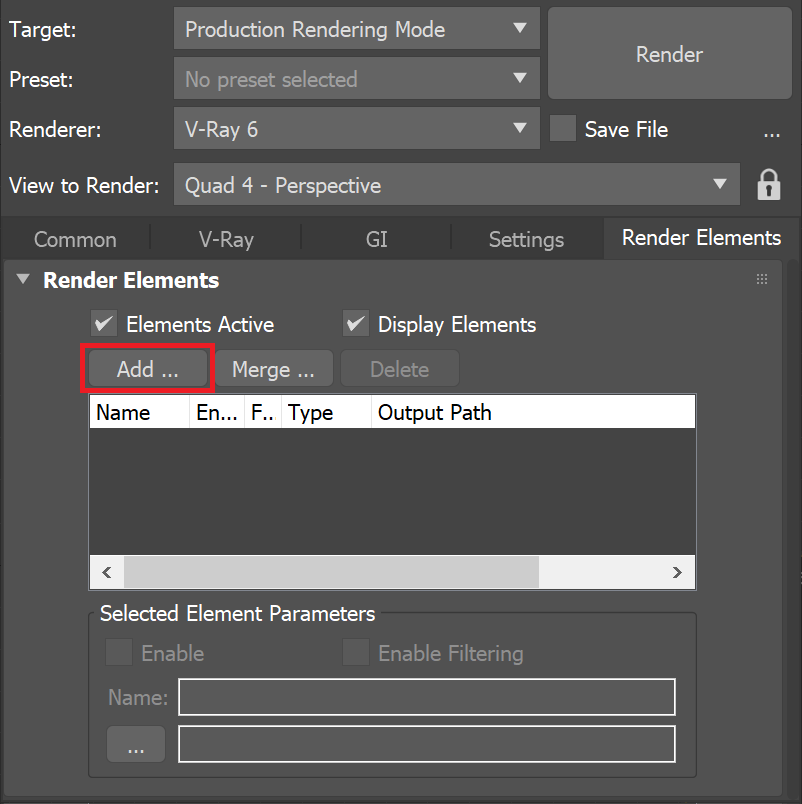 To denoise multiple render elements, enable the denoise checkbox for each render element in the scene that needs to be denoised.
Original
Denoised

VRayDenoiser offers a choice between the Default V-Ray denoiser, the NVIDIA AI denoiser, and the Intel Open Image Denoise. Each offers a different denoising algorithm that comes with different benefits. See the denoising engine examples below.

You can select which GPU device(s) to be used by the NVIDIA AI denoiser via the Select rendering devices for V-Ray GPU for 3ds Max #### tool. with the following environment variable - VRAY_OPTIX_DENOISER_PLATFORMS. For more information, see the Environment Variables page.

In earlier versions of V-Ray, you can select which GPU device(s) to be used by the NVIDIA AI denoiser with the following environment variable - VRAY_OPTIX_DENOISER_PLATFORMS. In V-Ray 6, this variable is depricated.

This render element is enabled through the Render Elements tab of the Render Setup window in 3ds Max and displays its parameters in a rollout at the bottom of the window:

VRayVFB – When enabled, the render elements appear in the V-Ray Virtual Frame Buffer.

Deep output – Specifies whether to include this render element in deep images.

Preset – When using the Default V-Ray denoiser, the presets can be used to automatically set the Strength and Radius values.

Strength – Determines how strong the denoising operation is. Larger values remove noise more aggressively, but may blur the image too much.

Radius – Specifies the area around each pixel to be sampled for determining how to denoise a given pixel. Larger values produce smoother results, but slow down the denoiser.

Temporal mode – Only available with the NVIDIA AI denoiser. When enabled, the Denoiser uses information from previous frames to create a smoother transition. Useful for rendering animation.

Panorama – When enabled, V-Ray considers whether the image is rendered with a spherical panorama camera with FOV of 360 degrees. This prevents visible seams caused by the denoising process.

Mode – Specifies how the results of the VRayDenoiser will be saved.

Hardware acceleration – Uses the GPU device(s) to accelerate the denoising calculations. In case there is no compatible GPU device, denoising automatically falls back to use the CPU, even if the option is enabled. When the NVIDIA AI denoiser is used, this option is not available, as it requires an NVIDIA GPU.

While the denoiser can be quite effective at removing noise, it may produce artifacts and loss of detail if the image is very noisy. For most scenes, use Bucket or Progressive image sampler with the Noise threshold set to 0.05 or lower. Additionally, the denoiser works best when the noise levels across the image are similar (the noiseLevel render channel is uniform grey), so using very low sampling is not recommended.

When rendering animations, enabling the Lock noise pattern option in the Global DMC rollout generally improves the results.
Using the Standalone vdenoise tool on the rendered frames can additionally improve the quality of the animation.
You can modify the frequency at which the denoiser is updated during progressive rendering via the Post effect rate parameter located in V-Ray's Settings > System rollout. Increase the value if you want to see the denoised image more often during IPR with V-Ray and V-Ray GPU. However, note that using large values is only useful in IPR and is not recommended for the final rendering.


The example below illustrates how the Default V-Ray denoiser works after more samples are made with the Progressive image sampler. When the samples are too few, there's not enough information for the denoising to produce a smooth result.

The example below illustrates how the NVIDIA AI denoiser works after more samples are made with the Progressive image sampler. When the samples are too few, there's not enough information for the denoising to produce a smooth result.

The example below illustrates how the Intel Open Image Denoise works after more samples are made with the Progressive image sampler. When the samples are too few, there's not enough information for the denoising to produce a smooth result.

However, using the Save separate render channels option from the Frame buffer rollout to save all layers as separate files will save the effectsResult channel to a file with the text RGB_color appended to its name, and the RGB channel as origRGB instead.

To denoise an image sequence with vdenoise run the following command:

where the question mark (?) replaces the digits in the sequence's file names.

For example, if the images in the sequence are named anim_0001.exr, anim_0002.exr, etc. and are located in the folder c:\renderoutput, the full command will be:

When that command is run, the sequence is read and for each frame, the specified number of adjacent frames are also considered. A new output image is then written for each frame.

The NVIDIA AI denoiser does not perform frame blending and will likely produce flickering when denoising animations.