This page is about render elements and their basic usage.

Render Elements are a way to break out renders into their component parts such as diffuse color, reflections, shadows, mattes, etc. This gives fine control over the final image when using compositing or image editing applications when re-assembling the final image from its component elements. Render elements are also sometimes known as render passes.

Render Elements are generated at render time based on the ones you choose before rendering. Most render elements have parameters that can be set to customize the render element or its later use in compositing software. These parameters are described on each render element's individual page, along with common uses and any notes on their generation and usage.

Since V-Ray Next Update 1, some of the render elements are rendered differently than before. The Lighting render element now contains all direct diffuse illumination and the GI element contains all indirect diffuse illumination. Similarly, all direct reflections of lights now go to the Specular element and all indirect reflections go to the Reflection element.

Previously this behavior depended on the sampling of the lights and not just on the type of the contribution. Some of the direct contributions that should be in the Lighting and Specular elements were written to the GI and Reflection elements instead. In both cases they compose back to Beauty correctly but the different types of contributions are now split between the elements more consistently.

This change makes the elements more consistent but it's also needed for preventing artifacts in these elements with the adaptive dome light (and possibly in the future with other adaptive lights).

There's an option to enable or disable the new behavior in the Global Switches rollout under the V-Ray tab in the Render Setup window. The consistent elements are automatically enabled when the scene contains an adaptive dome light so they don't have artifacts. They are also enabled by default for new scenes. For V-Ray GPU they are always enabled without an option to disable them. 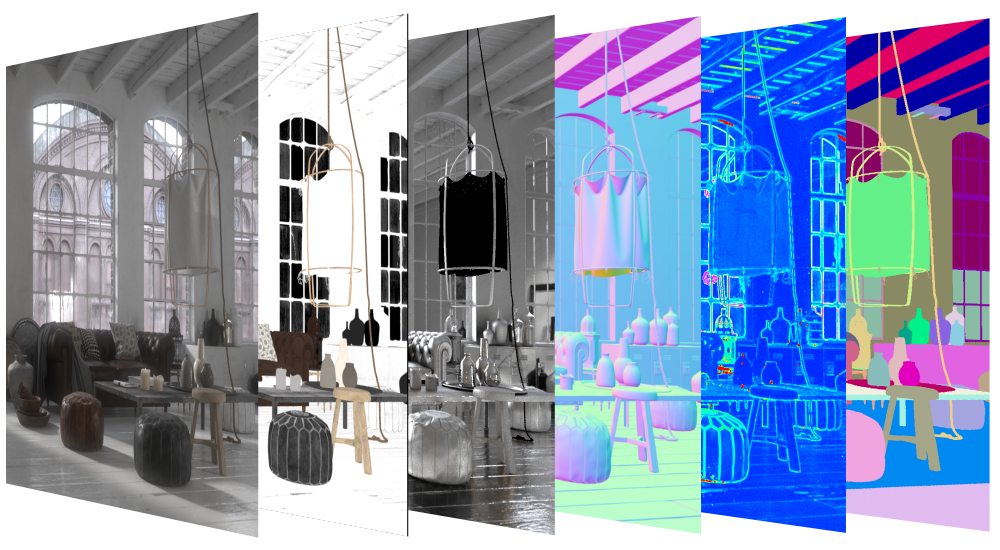 To use render elements, click the Add button to add the render elements you wish to generate at render time. When you render the scene, the added render elements also render. The exception is the RGB color Render Element, which renders automatically without needing to be added.

Render Elements in V-Ray break down into four major groups:

The Geometry Render Elements rely on geometry to generate geometry data for the compositing
process. These include the Velocity, Z-Depth, Wire Color, and Normals render elements.

The Utility Render Elements give insight into how V-Ray is running and extra functionality for compositing.
These include the Distributed Render ID, Sample Rate, Denoiser, Extra texture, Sampler Info, etc.

In order to render a correct Raw render pass you need to also render the corresponding main element and filter i.e. for Raw Reflection you need Reflection and Reflection filter, for Raw GI you need GI and Diffuse filter, etc.

1 – For Standard materials, the VRayLighting element includes the direct and indirect lighting, as well as caustics, while the VRayGlobalIllumination and VRayCaustics elements are black. However, for all materials, adding the VRayLighting, VRayGlobalIllumination, and VRayCaustics elements always gives the total diffuse surface lighting.

3 – Filtering is never applied to this Render Element.

4 – The channels needed for the denoise operation are automatically generated when the render element has been added before rendering.

6 – For all image formats except EXR the render elements depend on their respective channels' output settings.

7 – Forces 32bit only for cryptomatte layers.

8 – The background is calculated with unoccluded color by design. You can use compositing with the V-Ray Frame Buffer (VFB).

9 – For VRayObjectSelect RE, only Raw mode is currently supported in vrscene export.

Back to the table