The V-Ray installation includes a standalone denoising tool called vdenoise that can be used to denoise still images or animations outside of the V-Ray host application. This is especially useful for animations because the standalone tool can look at multiple frames at once and produce a better denoising result.

The vdenoise tool is both a command-line utility and a GUI application. It works with either .vrimg or multichannel OpenEXR files and writes out files with the same format.

Currently, the vdenoise tool does not support deep images.

To open vdenoise, go to Start Menu > Chaos Group > Denoiser tool. This opens up the vdenoise GUI along with its associated command prompt window. If you prefer not to use the vdenoise GUI, you can navigate to the vdenoise executable through any command-line interface and run it with one of the possible commands listed below.

Running vdenoise without any parameters, or from the Start Menu on Windows, will open the GUI version of the tool. This allows you to denoise still images or animations; as well as save and load preferred denoise configurations.

Input File... – Specifies the .vrimg/multichannel .exr image, .vlplfx, or sequence of images to denoise. Wildcards (?) can be used to define a sequence. For example, if the images in the sequence are named anim_0001.exr, anim_0002.exr, etc., the question mark (?) replaces the digits in the sequence's file names. In this case -  anim_????.exr

Specify Frame Interval – When enabled, specifies which frames to process.

By – Specifies the frame increment step.

Skip existing frames – When enabled, skips an input image if an output image with the corresponding file name already exists.

Default V-Ray - The default render engine. It is slower but more accurate and can denoise multiple render elements.

NVIDIA AI - Requires a compatible NVIDIA GPU. This render engine is faster but less accurate and it only denoises the RGB channel.

Intel Open Image - This render engine is faster but less accurate and it only denoises the RGB channel.

Preset – Selects a preset for the strength of the denoiser.

Strength – Specifies the strength when Preset is set to custom. Large values remove noise more effectively but may blur the image too much. The default value 1.0 uses the noise level render element as it is.

Radius – Specifies the pixel radius for denoising when Preset is set to custom. Large values slow down the denoiser, but may produce smoother results.

Threshold – Specifies threshold for denoising when the noise levels render element is missing. Typically, this is equal to the noise threshold for anti-aliasing in V-Ray.

Boost – Boosts the effect of the selected preset.

Hardware acceleration – When enabled, the denoiser attempts to use all suitable OpenCL (GPU) devices, and fall back to the CPU if unsuccessful.

Verbosity – Specifies the type of information that is printed upon denoising.

Display Progress – When enabled, the denoising result is displayed in a preview window.

Auto-Close – Automatically closes the preview window after the denoising is complete.

Save config – Saves the current denoise configuration into an .xml file. 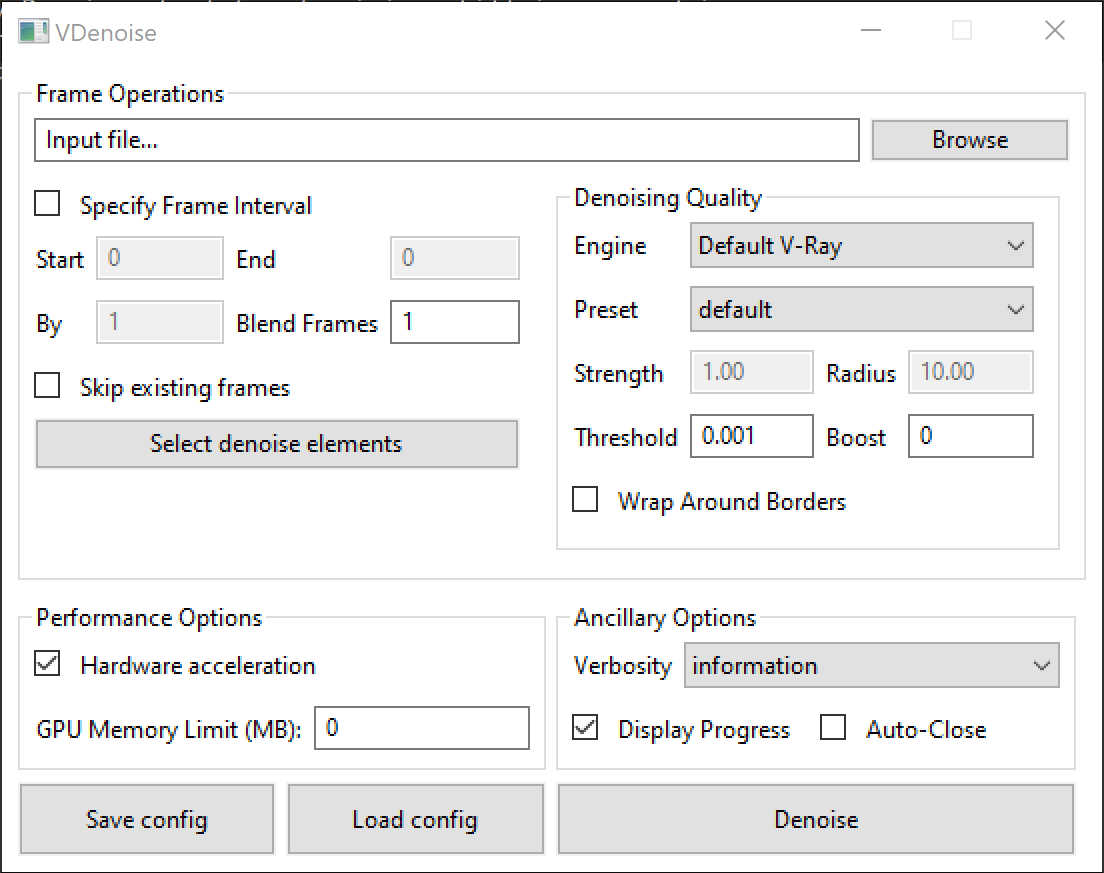 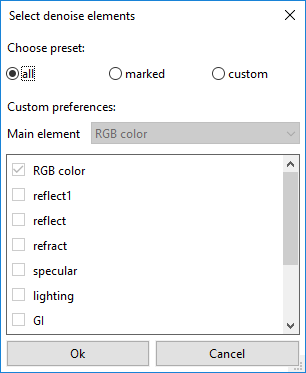 Choose preset – Allows you to select the color elements for denoising:

Main element – The main element on which the denoising of all elements is based.

The denoising Render Elements workflow with the GUI version of the Denoiser Tool is as follows:

The denoiser can also be used as a command-line utility without GUI display. Simply run the executable with one of the following commands to denoise an image or a sequence of images from within your command-line interface. You can also change the settings and behavior of the denoiser through CLI. To do so, please refer to the Denoiser Options tables below for a list of all available options.

To denoise a single .vrimg or .exr image, use the following format for the command:

where path\to\image.ext is the path and file name of the .vrimg or .exr file that you want to denoise.

For example, if the file you want to denoise is called render.exr and is located in the folder c:\renderoutput, the full command will be

To denoise a sequence of images, you must have all frames already rendered, as the denoiser needs to look at several frames at the same time. Use the following format for the command:

where the question mark (?) replaces the digits in the sequence's file names.

For example, if the images in the sequence are named anim_0001.exr, anim_0002.exr, etc. and are located in the folder c:\renderoutput, the full command will be

You can control the denoiser through optional switches on the command line. To list all available options in the command prompt window, run the denoiser without any arguments (vdenoise command) or use the -help switch:

The table below shows the optional switches, which are also displayed by the vdenoise -help command. To use a switch, precede the switch with a hyphen (-) and follow it with an equals sign (=) and the desired parameter, as shown in the table.

When the standalone Denoise tool is run, it outputs information about the process, including settings, warnings, progress, and files written in the command prompt window. 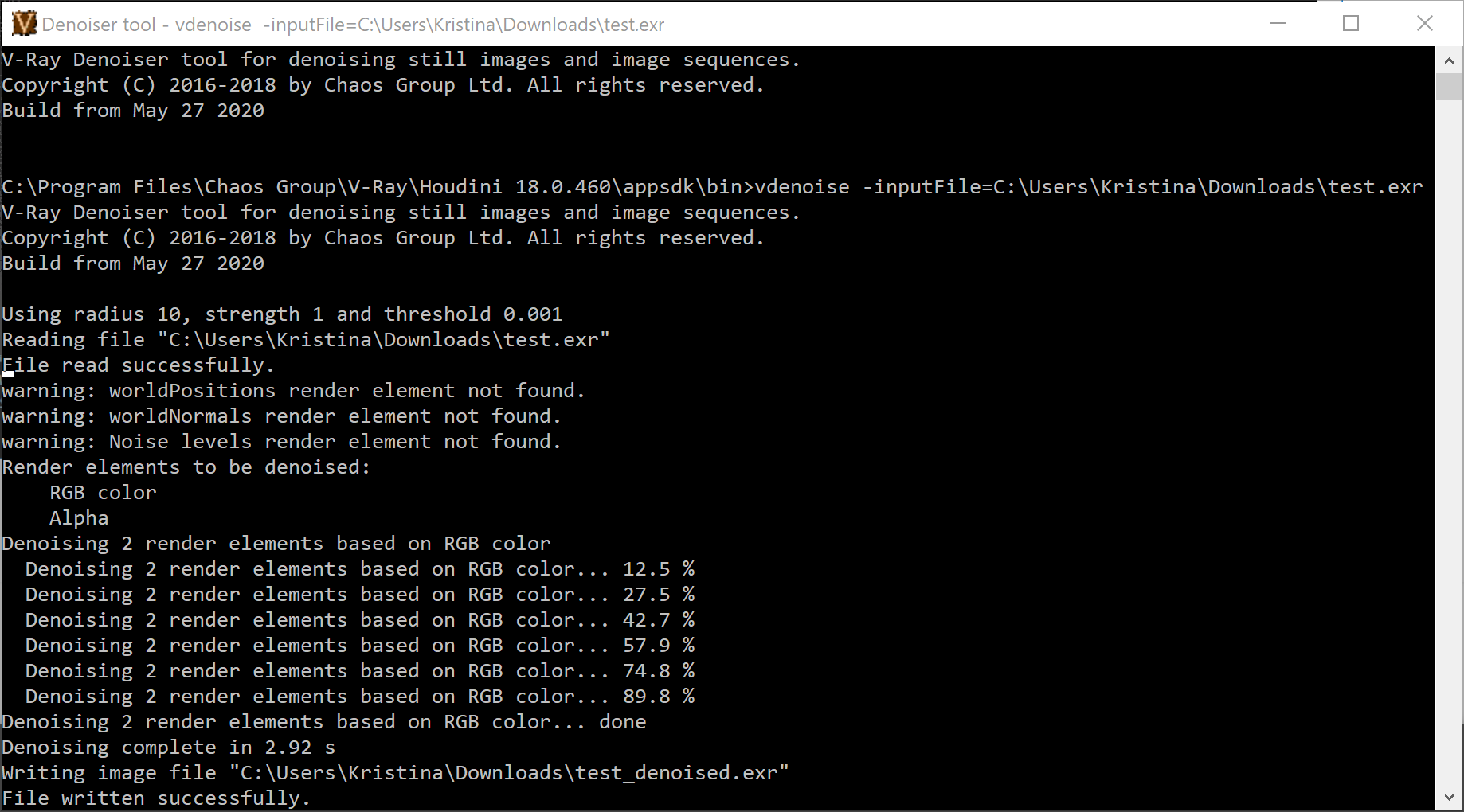