This page describes the Diffuse Render Element and how it is used to have more control of a final composited image.

The Diffuse Render Element shows the colors and textures used in materials, flatly applied to objects with no lighting information. The colors are the actual colors set in the material definition, and each texture appears as it does in the texture (file) itself. There are no highlights or shadows, and any background image is not included.

Note that the Diffuse Filter Render Element is affected by reflection and refraction combined weight. 1

This render element is, by itself, useful for making overall adjustments and enhancements to base colors and textures during compositing without effecting things like reflections and highlights. 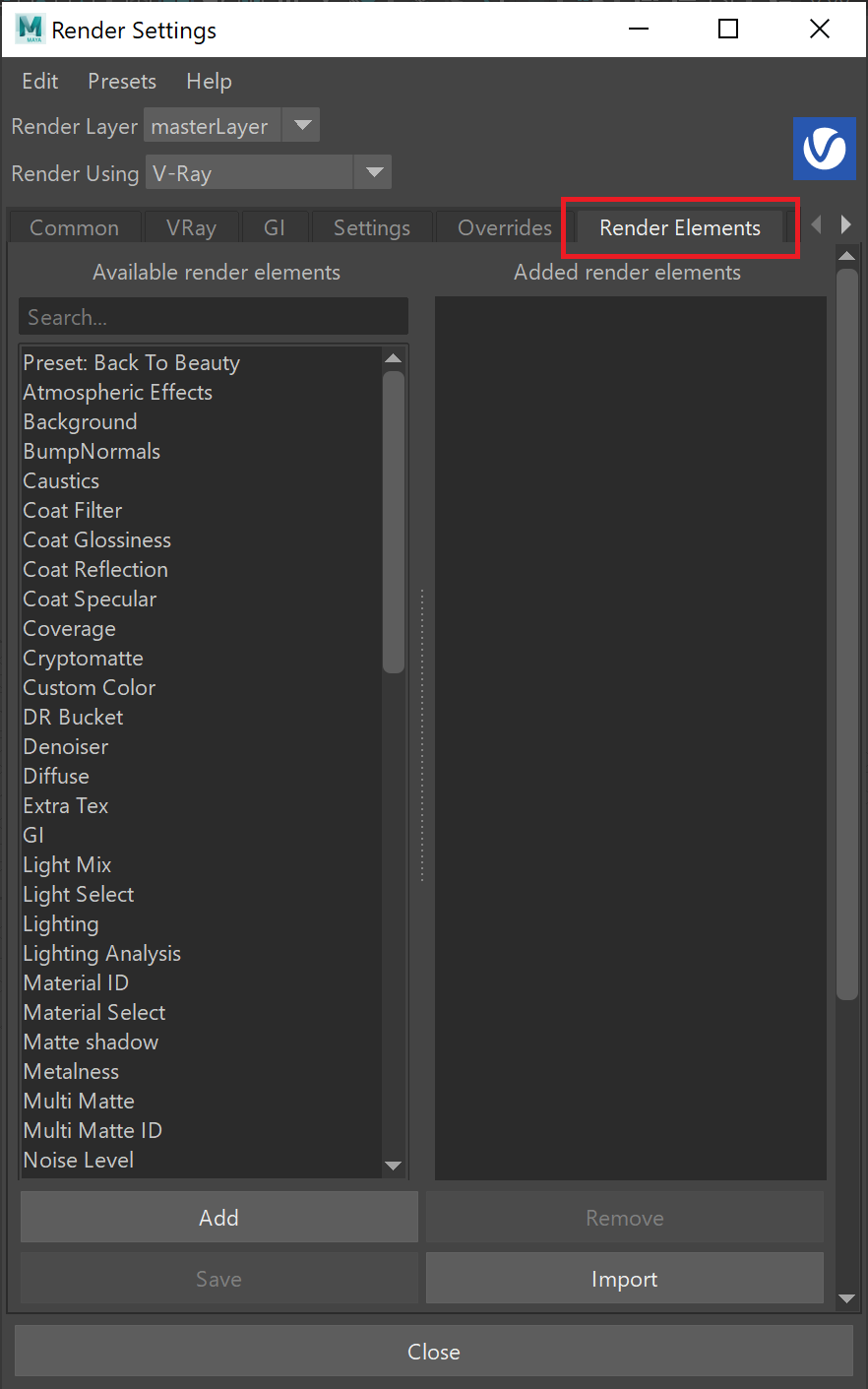 To use render elements, select from the Available render elements column and click the Add button to add the passes you wish to generate at render time. When you render the scene, the added render elements listed in the column on the right, will also render, which can be viewed from the VFB window's channel drop-down menu.

For more information on the parameters on this dialog, see the Render Elements tab page. 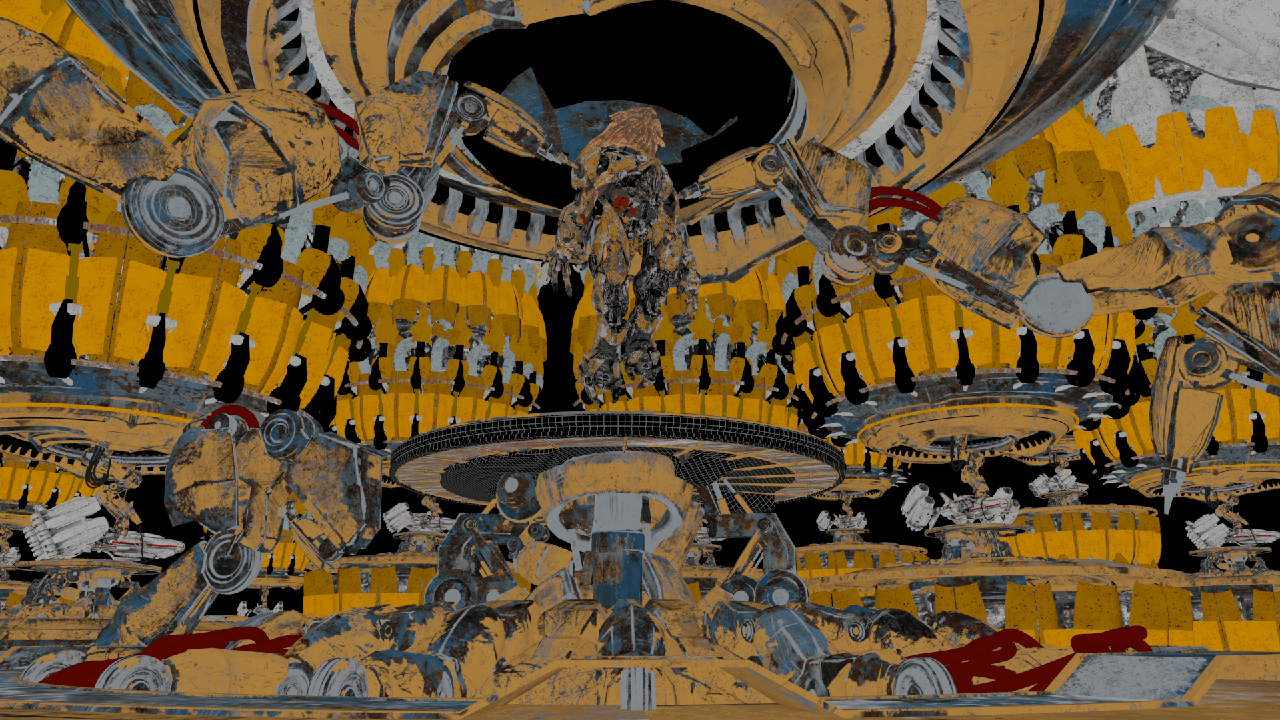 The parameters for this render element appear in the Attribute Editor under Extra V-Ray Attributes.

Enabled – When enabled, the render element appears in the V-Ray Virtual Frame Buffer.

Deep output – Specifies whether to include this render element in deep images.

Filename suffix – The text added to the end of the rendered file, when saved as a separate file (e.g. myrender.diffuse.vrimg).

The Diffuse Render Element is useful for changing the appearance of many passes when it is combined with Raw render passes (like Raw GI, Raw Light, etc.). In the example below, the Diffuse is multiplied by the Raw Global Illumination Render Element to provide the Global Illumination pass. In this way, color correction can be performed upon the raw pass without the actual diffuse colors being changed, making it possible to tint a pass in a realistic way without re-rendering.

The Diffuse is a very useful render element due to the number of raw passes with which it can be combined, giving the ability to manipulate many areas of the render at the composite level. The Diffuse pass can also be color-corrected on its own, as shown in the example below. In this case, a Multi Matte Render Element was used in conjunction with the Diffuse Render Element to isolate the center of the upper ring and change its color from yellow to green without also tinting its lighting or shadowing in any way. 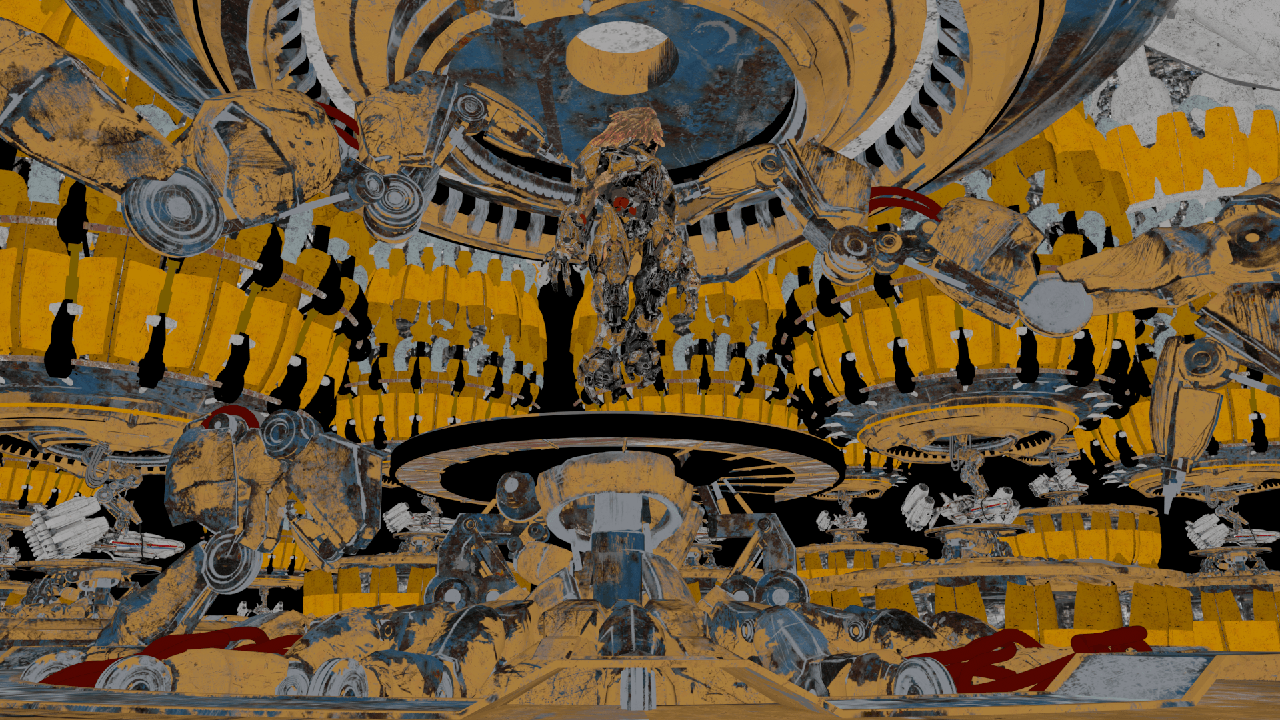 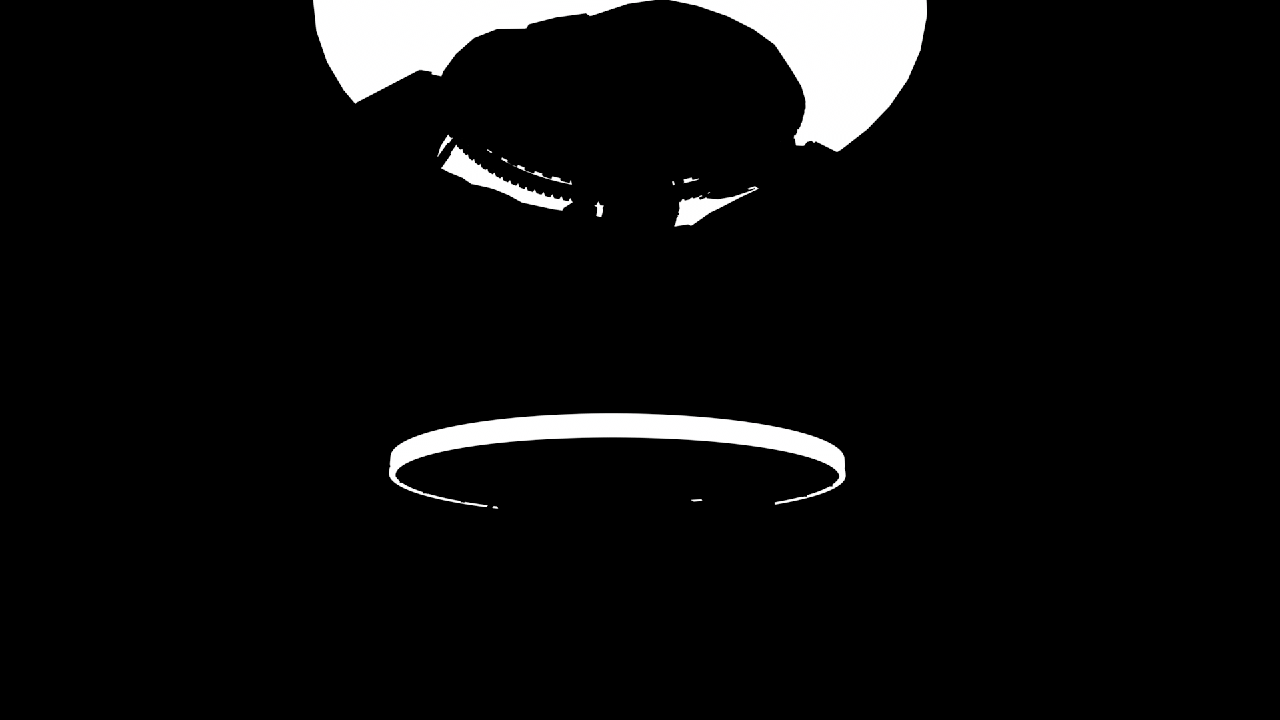 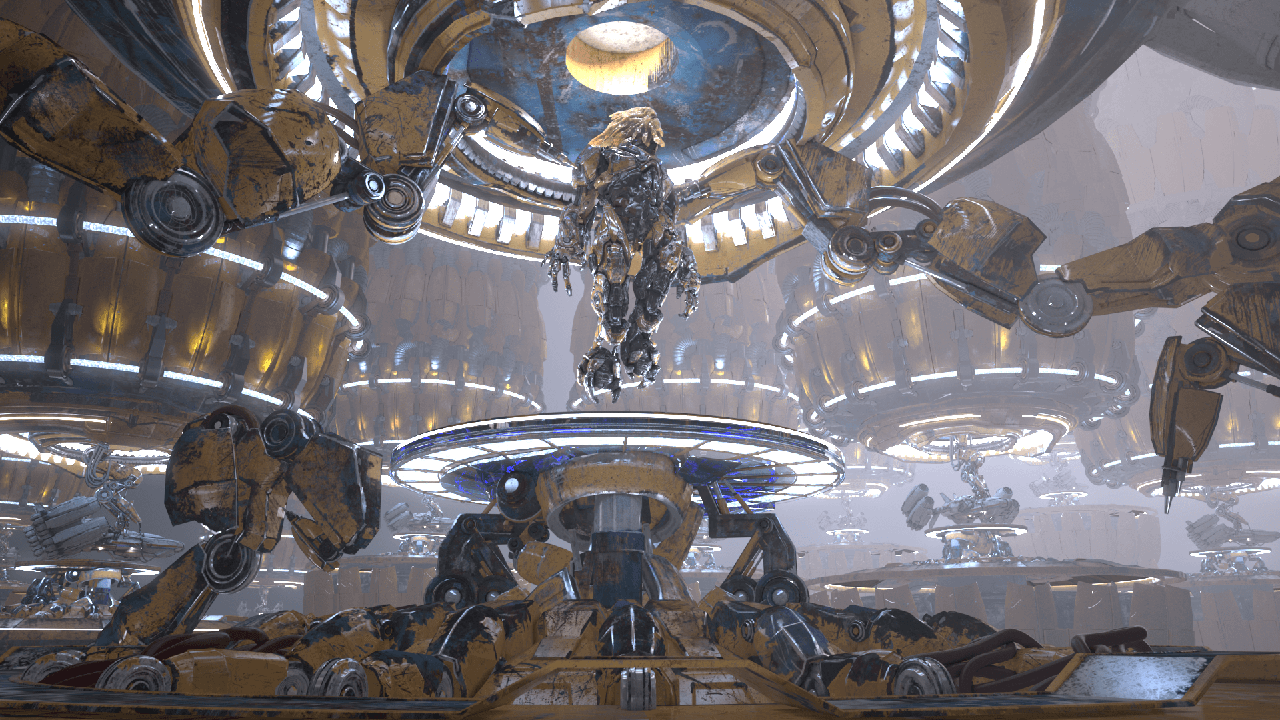 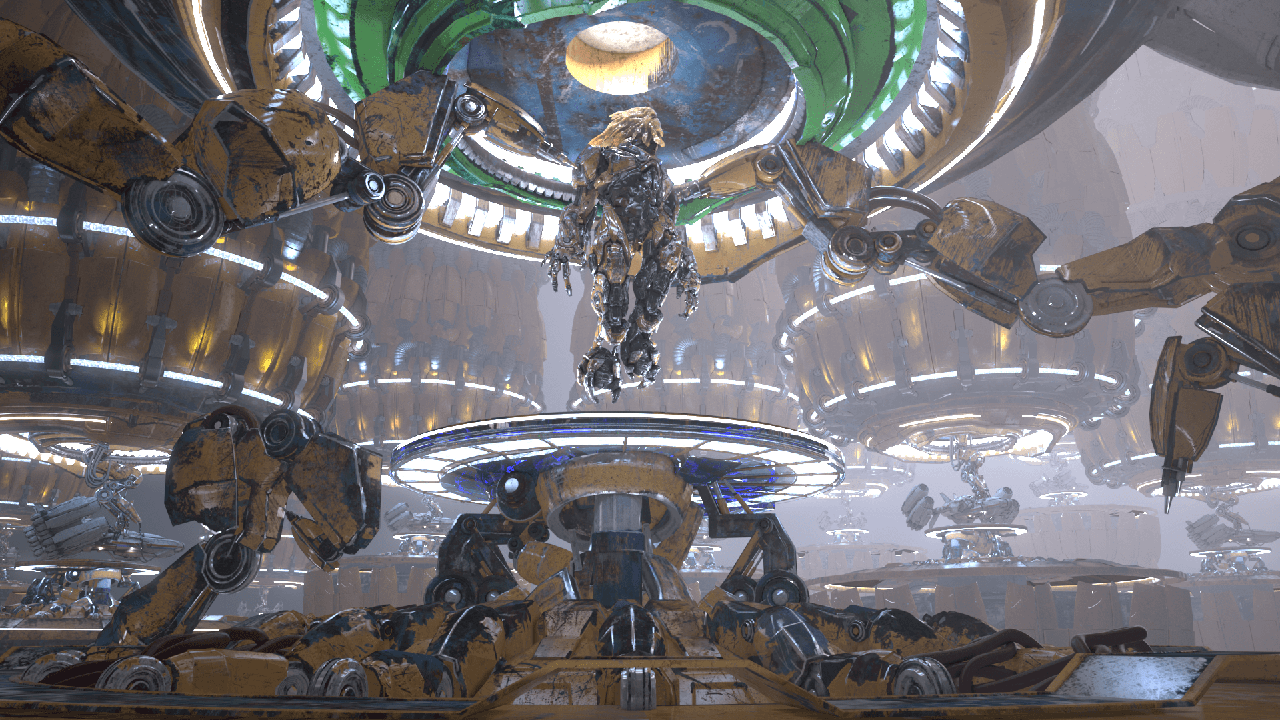 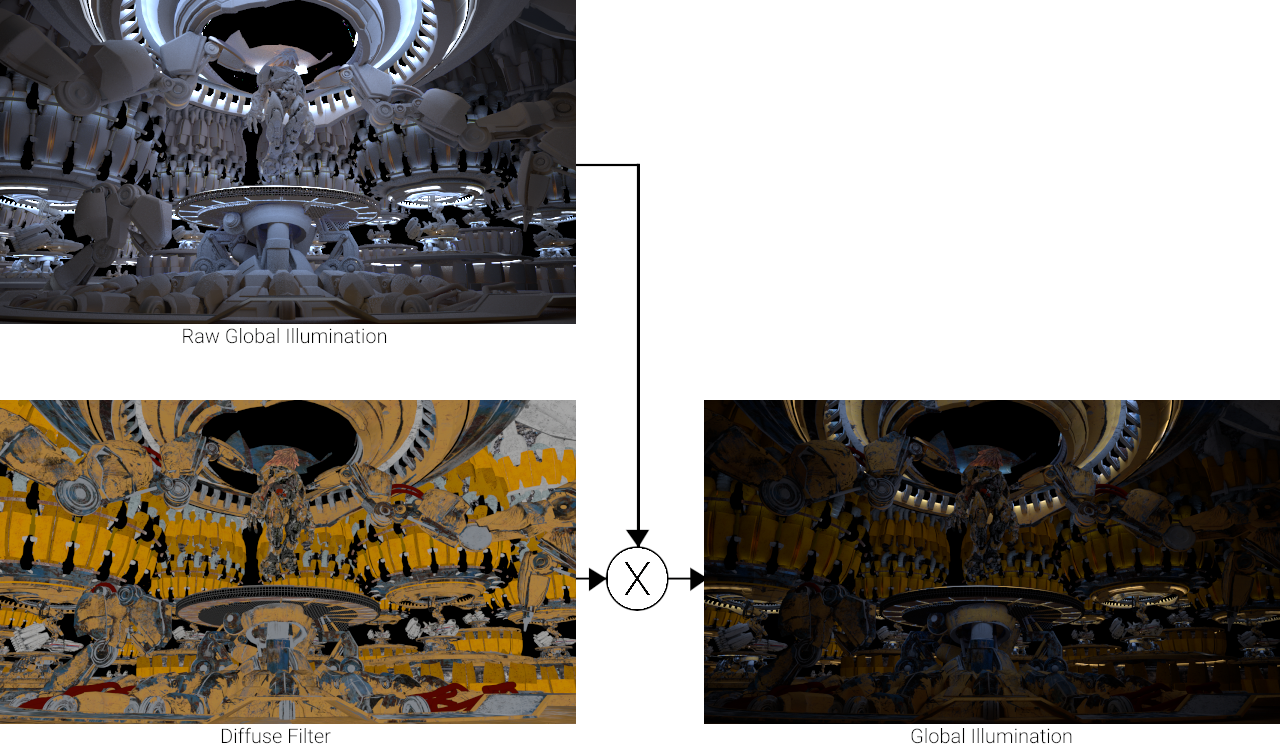 1 - This means that reflective objects with solid diffuse color appear differently according to the view angle. The actual diffuse color is displayed only if the VRayRawDiffuse Render Element is used.