The parameters in this rollout control the representation of the fluids in the viewport. All enabled values are drawn if the content is within the specified range.

Read Cache for Preview | prvReadCache – Allows to completely disable reading of cache files in order to speed up the viewport and the simulation. When cache files are not read, neither voxels and particles, nor the grid bounding box or the Cache File Content under the Simulation rollout will be shown. This way scrolling the timeline would be quick as there will be no access to hard disk or the network. If you still need to see the grid bounding box and the Cache File Content info, you could leave this option to Always, and instead disable all voxel preview options, the Mesh Preview, GPU Preview and all particle previews. The intended use for this parameter is as a last step performance optimization - once you're done tweaking your setup and you're ready to commit to a high-resolution, overnight simulation, disable the preview of cache files.

Detail Reduction | detailReduction – Decreases the grid and particle detail in the preview. A value of 0 means no reduction. Increase this value if the interface starts to lag due to the simulation being very large. Note that this parameter does not affect the Mesh preview.

Auto Reduction | viewAutoReduction – Enables automatic adjustment of the Detail Reduction parameter to improve display performance. The preview detail will be reduced up to a point where the preview will display fast without blocking the interface. Note that the detail will only decrease automatically, but will not increase. This option works only for the Voxel and Particle previews.

Only if Selected | onlyIfSelected – When enabled, the content in the viewports is only shown for the selected Simulators.

Active View Only | activeViewOnly – When enabled, only the selected viewport shows the content of the Simulator.

Show Box | showGrid – When enabled, displays the Simulator's box in the viewport. The Simulator box settings can be modified from the Grid rollout.

Graph Cells | showGridCells – Shows a lattice with the cell sizes on the sides of the Simulator's box or the Slice Preview.

Show Mesh | viewMesh – Turns the mesh preview on or off. This mode overrides the Voxel Preview mode. Note that if Render Mode is set to Ocean Mesh, the ocean will have lower detail in the preview than in the render in order to speed up the viewport display.

Color | viewMeshColor – Specifies the color of the preview mesh.

The default preview mode that displays the individual content of each cell. All enabled channels are drawn if their content is between the corresponding thresholds.

Phoenix can only preview the channels present in the cache file for the current frame. To see the list of available channels and their ranges, go to the Cache File Content section of the Simulation rollout. You can also find more info on the Grid Channel Ranges page.

Only the Overlap Of: | andReduction – When enabled, all of the enabled channels below in a cell must meet the selected threshold conditions to visualize the cell.

As Fire | viewTempNatural – When the temperature is in Kelvins, e.g. when coming from a Phoenix simulation, the voxel colors come from a physically correct black body radiation model. In this mode the custom color for the temperature are disabled. Check the Grid Channel Ranges for more info.

As Rainbow | viewVelStreamlinesColorCurve – Represents the Velocity Streamlines in rainbow colors.

Streamlines Length | viewVelStreamlinesMaxIterations – Signifies the maximum length of each streamline in the preview. Adjusting the value will provide you with a guide/preview of the velocity field's motion. The Streamline's length is measured in voxels and at the lowest setting, the Streamlines will be no larger than a voxel.

Add Selected Forces or Fields - When a native Maya or Phoenix force and a Phoenix Simulator are selected, the selected force will be added to the Forces preview of the Simulator. This button is a shortcut for adding the selected force to the Force List phxforceprv_set1 which is automatically created with the Phoenix Simulator. You could do this manually by Middle-Mouse-Button drag&drop of the force into the Force List set in the Outliner.

Auto Range | viewAutoRange – When enabled, automatically adjusts the preview ranges of visible channels for the current frame so that important data is always visible and the preview is always quick.

Additionally, some Phoenix forces and standard Maya fields require the previous velocity at their acting position in the grid. This is not yet supported by the Forces preview. As a result, forces such as the Drag force are shown as if their velocity is always 0 and will not be visible. In addition, forces that act differently depending on the quantity of content in the grid (e.g. amount of liquid, smoke, or no content) are not yet supported by the preview. 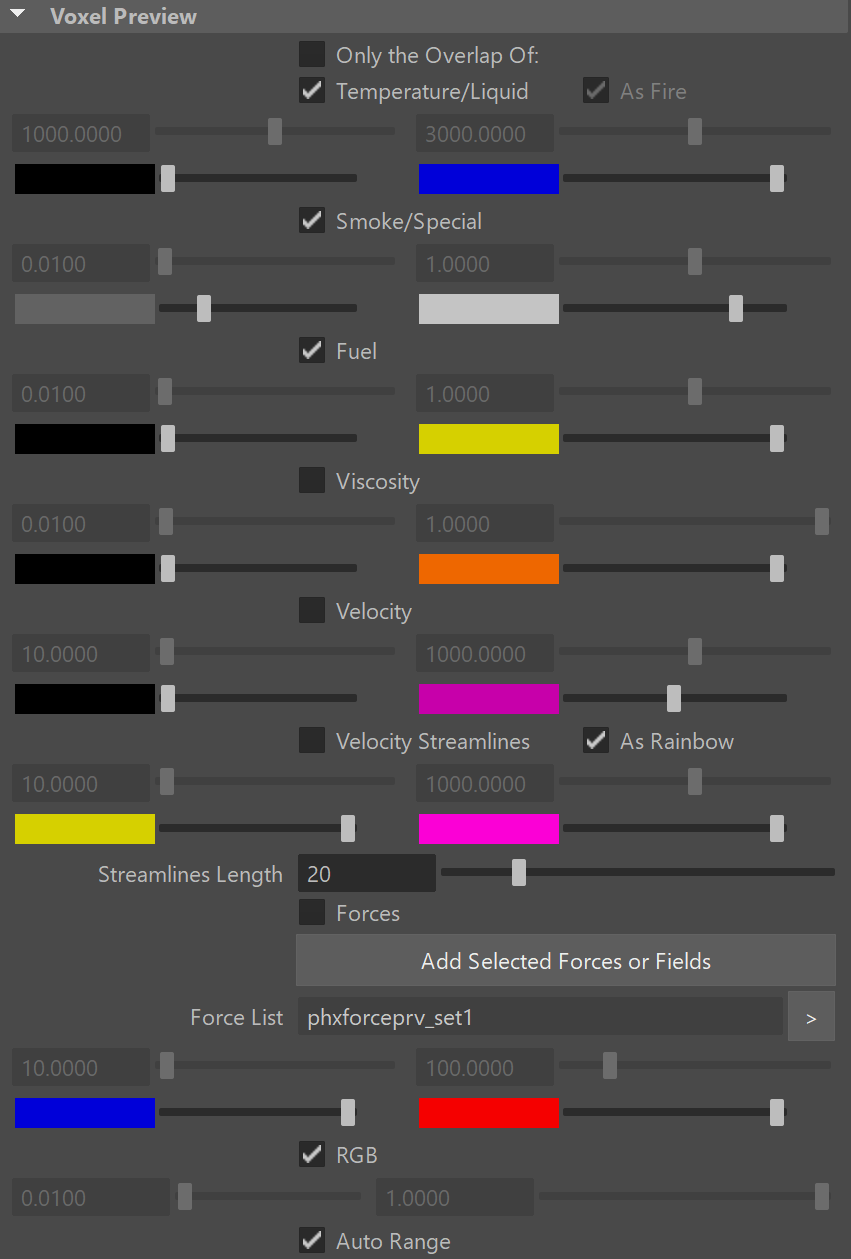 The parameters here allow visualization of all particle groups generated by the Simulator. 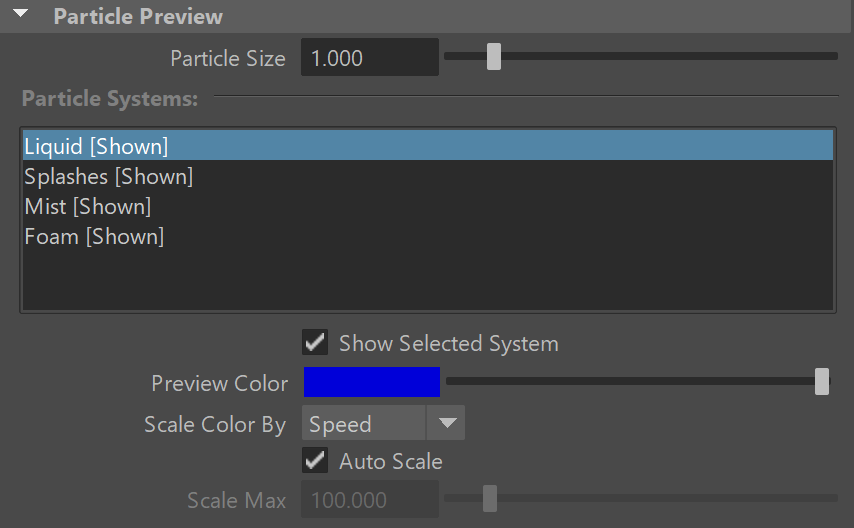 Particle Size | viewPartSize – Sets the size of the particles in the Viewport. Note that all particles are drawn with the same size.

Particle Systems | viewPrtSysNames – Displays a list of particle systems generated by the Simulator. Selecting a particle system allows you to edit its preview settings.

Show Selected System | viewPrtSysShowUI – When enabled, the particle system will be visible in the Simulator preview.

Auto Scale | viewPrtSysAutoWSpeedUI – When enabled, automatically calculates Scale Max based on the Min/Max range of the selected Scale Color By particle channel, assuming the respective channel export has been enabled in the Output rollout for the selected particle system.

Scale Max | viewPrtSysWSpeedUI – When Auto Scale is disabled, allows you to specify a constant value at which the particle preview color becomes pure white. Particles with a Scale Color By channel value higher than the specified Scale Max are also pure white. You can also find more info about the usual particle channel maximum values on the Particle Channel Ranges page.

The Slice preview displays only a single plane of voxels which can be convenient for debugging and fine-tuning a simulation.

Draw Just a Slice | viewSliceAxis – When enabled, only a voxel-thick cross-section of the grid is visible. This works for voxels, particles, and velocity streamlines, but not for the GPU Preview or the Mesh Preview. It allows for a better view of occluded details and can help when previewing very rich data such as velocity fields, or in order to see underwater cavities.

Along X / Y / Z axis – Slices the grid along the specified axis.
Disabled – Turns the Draw Just a Slice feature off.

Slice Level | viewSliceLevel – Specifies the offset of the slice from the bottom center of the grid in voxels.

The Phoenix GPU Preview shows the shading of the Simulator using the current Volumetric Options. The preview works in real time and you should use it to quickly preview how changing volumetric options and curves affects the look of the simulation. Additionally, it can automatically save images during simulation, so you can easily preview it in motion. Note that the GPU preview is not a replacement for rendering though - in order to display quickly, it ignores Displacement, ignores any volumetric texture mapping of the Fire or Smoke, and all lights are treated as directional, so using dome lights, area lights or global illumination would produce different results than the preview. If you need to iterate on the final look of the simulation in complex lighting setups, you should use V-Ray GPU IPR or another interactive rendering solution. 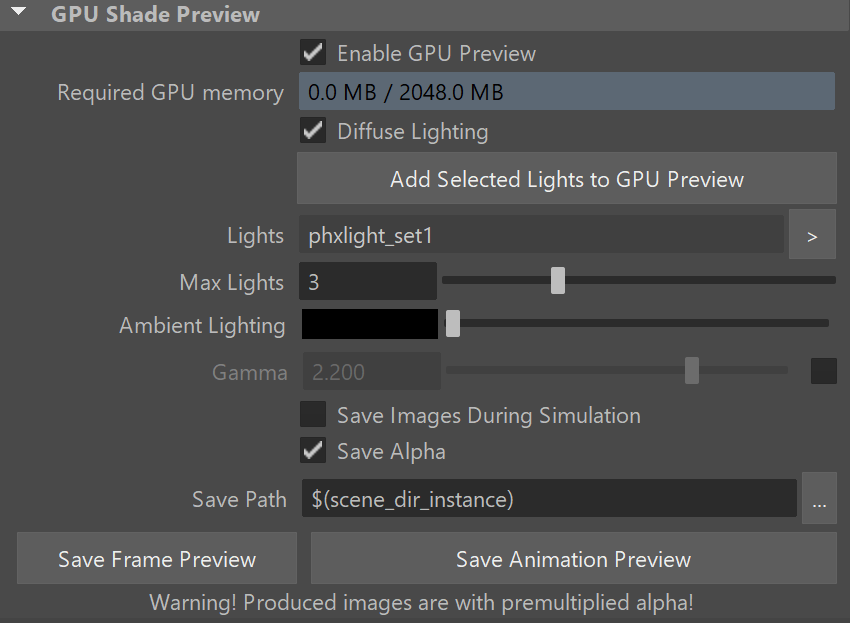 Enable GPU Preview | gpuViewEnbl – Enables the GPU shading preview in the viewport. Note that geometries that intersect or exist inside the bounding box of the Simulator may appear behind the fluid or in front of it.

Required GPU memory – Shows the approximate texture RAM that will be used for the preview. Note that the GPU can allocate textures that exceed the available GPU memory but at the cost of speed. Also, there is no way to tell if the GPU can handle the texture without trying.

Diffuse Lighting | gpuViewLighting – When enabled, turns on the diffuse lighting. Without lighting, the smoke will not be visible and only fire will be rendered.

Add Selected Lights to GPU Preview – When a light and a Simulator are selected, the selected light will be used for the GPU preview. This button is a shortcut for adding the selected light to the Lights phxlight_set# which is automatically created with the Phoenix Simulator. You could do this manually by Middle-Mouse-Button drag&drop of the light into the Lights set in the Outliner.

Lights | gpuViewLight – A set that specifies the exact lights used in the preview. If empty, the Maya viewport lights will be used, which can be controlled by the viewport's Lighting menu. You may need to select Use All Lights to enable the actual lighting. Note that V-Ray lights may not be used as Maya viewport lights and you should add them to the Lights set explicitly. If no lights are selected neither for the Maya viewport, nor added to the Lights set, Phoenix will use one default directional light.

Max Lights | gpuViewMaxLights – Sets the maximum number of lights used in the GPU preview. If there are more eligible lights depending on the conditions described in the Lights option, only the closest lights to the Simulator will be used, and the directional lights will be always with lowest priority.

Ambient Lighting | gpuViewAmbient – When Diffuse Lighting is enabled, this specifies the color of the ambient light.

Gamma | gpuViewGammaEnbl, gpuViewGamma – Specifies the gamma for the GPU preview. Affects the viewport preview only.

Save Images During Simulation | gpuViewSaveOnSim – When enabled, automatically saves the preview of each newly simulated frame.

Save Alpha | gpuAlphaEnabled – Allows saving an alpha channel if the image format is PNG or TIFF. This option is ignored for BMP and JPG. If you are using Pdplayer, set the "Alpha Mode" to "Ignore Alpha" or "Premultiplied Alpha".

Save Path | gpuViewPath – Specifies the directory and the name template for the output preview image files. It uses the $(scene_dir_instance) macro by default, and there are also other available macros as listed below. The supported formats are PNG, JPG, BMP and TIFF.

#### is the frame number formatted with at least as many digits as the hash signs. If the frame digits are less than the hashes, the number is padded with zeroes to the left. As an example, the following table shows how different numbers of hash signs affect the formatting of different frame numbers.

Save Frame Preview | phxfdSaveFramePreviewSelectedSim – Saves an image preview for the current frame. If you have many instances of the same Simulator, you could also merge their GPU Previews in the same image using this example MEL command:

Save Animation Preview | phxfdSaveAnimPreviewSelectedSim – Save an image preview for the whole simulation range. Note that the preview in the viewport will be disabled for faster processing. If you have many instances of the same Simulator, you could also merge their GPU Previews in the same image sequence using this example MEL command: