Render Elements are a way to break out renders into their component parts such as diffuse color, reflections, shadows, mattes, etc. This gives fine control over the final image when compositing or image editing to re-assemble the component elements. Render elements are also sometimes known as render passes.

Render elements are generated at render time based on the user's selection before rendering. Most render elements have parameters that can be customized to further assist the composting process. These parameters are described on each render element's individual page, along with common uses and any notes on their generation and usage. 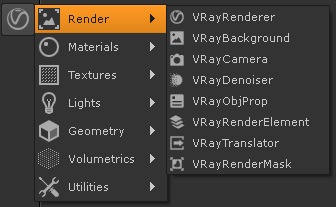 The following nodes can be used to generate or modify render elements:

See the Nuke Rendering In-Depth QuickStart for a guide on setting up render element nodes.

Render Elements in V-Ray break down into four major groups:

The Utility Render Elements give insight into how V-Ray is running and extra functionality for compositing.
These include the Sample Rate, Denoiser, ExtraTex, etc.